On the other hand, Denji confronted Kantana Man, and both fought each other to death where Denji did manage to defeat the Kantana man, and after that, he took him as a prisoner to get information on Gun Devil.

But towards the end of Season 1, we see the introduction of a new antagonist which is Reze, aka the Bomb Devil, which hints to us that in the next season of Chainsaw Man, we will be witnessing the beginning of the new arcs, i.e. the Bomb Devil Arc and the International Assassins Arc.

It is evident that based on the responses that the anime has received so far, Chainsaw Man will be renewed by MAPPA studio. The official announcement might be made in the first week of 2023.

Judging by the insane popularity of the show, it is evident that MAPPA studio cannot stop from renewing the series for the second season.

The show is already one of the highest-rated anime series for the last 2 months, and on IMDb, Rotten Tomatoes and MyAnimeList, the Chainsaw Man is currently ranked 8.7, 97% and 8.7.

Although the official announcement from Chainsaw Man Season 2 hasn’t been made by MAPPA yet as the show is yet to be renewed for a second season, and the announcement is currently pending with MAPPA.

But as we stated above, the show will be renewed for a second season. Judging by the upcoming Attack on Titan Season 4 Part 3 release and Jujutsu Kaisen Season 2 release, we think we would at least need to wait till Mid-2024 for the Chainsaw Man Season 2 release.

After the ending of Chainsaw Man Season 1, the Kantana Man arc finally concluded with Samurai Sword and Akane Sawatari finally being defeated at the hands of Special Division 4, so in the next season, we would be witnessing two new arcs:

The Bomb Devil arc will introduce us to a character named Reze who works with the soviet union and has been tasked by the soviet government to retrieve the heart of Chainsaw Man.

Reze would try to make Denji fall in love with her and then finally try to control him and kill him to get Chainsaw Man’s heart.

But luckily, Makima would intervene, and there would be a clash between Makima and Reze, which would be interesting for us to look out for.

The next arc would be the International Assassins Arc, where assassins worldwide would target Chainsaw Man to get Pochita and Denji’s hybrid heart, and Denji, Power, Aki, Makima, and the other members of Divison 4 would try to protect Denji from getting hurt.

But later on, The Ghost Devil grabbed Aki by his neck and tightened her grip, and it seemed like Aki was about to pass out.

But Aki doesn’t pass out and survives; instead, The Ghost Devil does not kill Aki, drops him on the ground, and offers him a cigarette, similar to what Himeno used to do.

Aki then recalls the final moments with Himeno when she had told him that Ghost Devil could sense fear.

Therefore Aki follows Himeno’s advice and stops fearing the Ghost Devil, which allows Aki climbs up to her body and lets him decapitate her head using his sword.

As Aki defeats the Ghost Devil, he gets hold of Akane Sawatari, but Kobeni already has Akane by putting a knife in her throat.

As per Makima’s orders, they needed Akane and Kantana Man (Samurai Sword) alive to bring them for interrogation so that the department could retrieve more information on Gun Devil, but Akane already had a contract with Gun Devil if she is unsuccessful in her mission she would be killed by the Snake Devil, therefore as per her last resort, she committed suicide, and The Snake devil kills her on the spot.

On the other hand, Kantana Man and Denji confronted each other, and both fought one another, throwing each other through buildings, rooftops, and trains.

Kantana Man, just like in the previous fight, had the upper hand as he sliced both of Chainsaw Man’s hands.

Kantana Man then proceeded with his final attack to kill Chainsaw Man, but Chainsaw Man, this time, summons chainsaws through his legs and cuts Kantana Man’s body in half.

After that, Denji brings Kantana Man back to his human form and takes him into custody, but before the Police come to take Kantana Man away, both Denji and Aki decide in memory of Himeno they would kick Samurai Sword’s private part with all their strength and whoever manages to get the painful scream out of him would win a bet.

Aki and Denji finally get their revenge on Kantana Man, and they kick Kantana Man in the private part with their full strength to make him suffer. 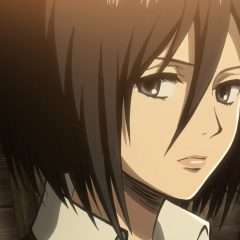 Who will Mikasa marry in Attack on Titan? Do Jean and Mikasa end up together at the end?