Chainsaw Man is one of the recent most popular ongoing anime series.

Developed by MAPPA Studios, the show is about a boy name Denji whose father had committed suicide and left with a huge dept.

Denji soon comes across a chainsaw devil named Pochita at his father’s funeral, and with Pochita, he makes a pact by giving his blood to Pochita.

Denji gave his blood to Pochita because devils are born from human fears and can also be healed by human blood.

Denji makes a pact with the devil that he will help him by giving blood to heal, and in turn, Pochita would have to help him.

Soon Denji becomes a devil hunter and works under Yakuza as he used to owe a debt to him.

Denji used to kill devils for money to sell those in the black market, and Yakuza could earn money from that.

Yakuza used to mistreat Denji. He used to give him little money so that he couldn’t repay the debt.

One day Yakuza tries to backstab Denji and tries to kill him by being in contact with a Zombie devil. Denji ultimately gets killed.

But before he died, he had already made a pact with Pochita that if he died in any of his assignments, Pochita would merge with Denji and take over his body.

Pochita, the pet devil dog, aka the chainsaw, does that, and Denji finally resurrects himself.

Then he goes on killing the Zombie devil, and then a team of governmental Devil Hunters from the Public Safety Division, led by Makima, persuades Denji to join their ranks and help people.

In Episode 9 of Chainsaw Man, we see that to avenge the death of Himeno, Denji begins to fight the Kantana man, but it seems like the Kantana man is overpowered and stronger than Denji.

With the help of Akane Sawatari (who had a contract with Snake devil), he sliced Denji in half, and as they were about to take Denji to Gun Devil, we see Makima starts using her power to kill Akane and Kantana Man’s squad one by one.

So what happens at last, and what are the powers of Makima? Well, read along to know the details.

Yes! As shown in Chainsaw Man Episode 9, Himeno is indeed dead, as she sacrificed herself to save Aki.

Himeno sacrificed herself to the Ghost Devil and fought both Kantana man and the Snake Devil user Akane to save Aki.

But before she died, she managed to pull the chain attached to Denji’s chest, which awakened the Chainsaw Man.

And they started picking up Denji’s body and tried to pull him into the cab to take him to Gun Devil; Makima started using her powers. Read along to know what Makima did in episode 9.

What happened to Makima? Is Makima dead or alive?

Yes, it looks like Makima is still alive, as she has used Control Devil’s powers to resurrect herself on time.

And as the Control Devil likes to keep everything secret, she probably had no other option but to kill everyone in the compartment where she was shot earlier.

Makima arrived in Kyoto, and Tendo and Kurose welcomed Makima.

Makima orders Tendo and Kurose to bring in 30 men with life imprisonment at a secret spot.

Then in the secret spot, Makima first blindfolds everyone, including Tendo and Kurose, and she starts using Control Devil’s powers to kill all the enemies except the Kantana man and Akane.

Kantana Man and Akane were shocked to see how their comrades were dying and as they were about to pick up Denji’s upper half of the sliced body, Kobeni appeared to save her friend.

All members of divisions 1,2,3 and 4 were executed except Kobeni, Aki and Denji.

We finally saw Kobeni using her agility to dodge a tail attack from the Snake Devil and cut Kantana man’s hands off with one slice; Akane tried to fire some bullets at Kobeni.

Still, Kobeni again used her reflexes to dodge those and fired back and shot Akane and Kantana Man.

She almost killed both of them.

Kantana Man and Akane didn’t know how to retrieve Denji’s body now, so they thought of leaving the spot.

Denji managed to survive because of Kobeni.

She arrived on time and got rid of both Kantana Man and Akane.

They were forced to flee the spot without taking Denji’s body to Gun Devil.

If they could have taken any of the halves of Denji’s body, Denji would have died.

But luckily, Kobeni has saved our protagonist.

Denji will be healed in the next episode whether both Aki and Denji will wake up next to each other and Denji’s body will be completely healed.

Well, the answer is simple Denji is now a hybrid the time his body was sliced, he was in his hybrid form of Chainsaw Man.

So if anyone is in their hybrid form, they could be revived by consuming blood.

As Kobeni had arrived right on time and saved Denji, he would be given the blood, his body would heal itself, and Denji would gain consciousness in the hospital episode. 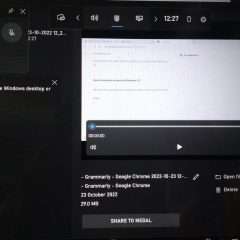 How to record screen in Windows 11? How do I record my screen on Windows 11 with Audio? How do you record more than 10 minutes on Xbox Game Bar windows 11?