1899 Episode 2 Recap and Ending Explained: The Boy-What is the significance of the triangle? What happened to Ada? Is Ada dead? 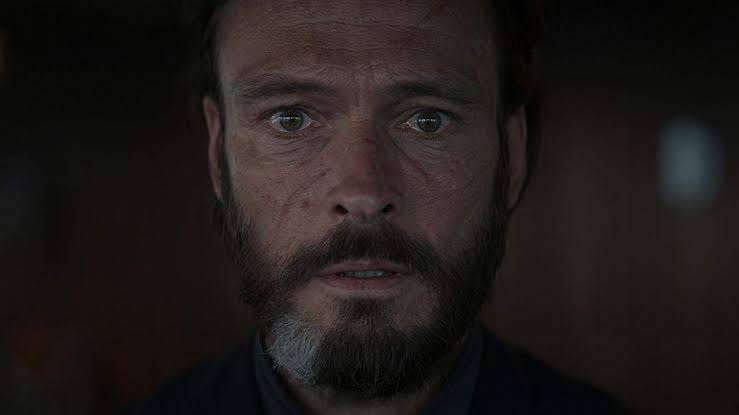 Episode 2 of the recently released Netflix series “1899” opens up with a similar setting, a dream.

This one belongs to Eyk. In that dream, he wakes up amidst the woods and hears a faint voice of a child singing a German folk song.

There’s a house set on fire, burning bright with high flames and a woman and a young girl are standing inside.

He wakes to Maura’s voice and looks at his hand holding a ribbon.

The same one he had found in Prometheus.

Eyk is alarmed by the knocking on the door.

When  he opens the door, he learns that the sailors on the Kerberos have received a message from the shipping company that reads: “Sink ship.”

Doubts troubles their minds. They can feel something about Prometheus being out of place, but they are yet to discover what exactly it is.

The scene shifts to Maura watching over the boy from Prometheus, who has fallen asleep.

People are mystified by the fact that the boy is the sole survivor.

Eyk meets up with Maura. They both learn that they have questions about the boy yet to be answered. And the boy has not yet said anything.

Eyk asks Maura if she has the same hallucinations as him after their trip to the Prometheus, but it does not seem to be the case with her.

Maura encounters Daniel, the stranger who boarded the Kerberos, standing in front of her room.

She tells him he looks familiar. He denies saying he was just there because he heard noises coming from her room.

Maura gets into her room with food for the boy in her hand. She tries to talk him out to get some information from him.

I was trying to get answers about what happened in Prometheus.

The boy brings her the pyramid without saying a word. But she does not know what to make of it.

Ada pities the boy in the lower-class cabin while washing Krester’s hair.

She talks more about her wishes and looks forward to her bright days once they reach America.

Later on, Ángel comes to meet Krester and hands him a silver case.

Before he can speak anymore, they are interrupted by Tove, who walks in.

When Ángel leaves, Tove questions Krester on what that was all about, but Krester shakes it off lightly.

Eyk asks one of the sailors if anything is peculiar about the last sale of the ships.

He needs to announce to fill everyone in, but he needs to confirm his doubts first.

There is unrest among the passengers regarding the whereabouts of the mysterious boy.

It leads to many assumptions and growing doubts.

They want answers to what Prometheus means for their trip.

Lucien comes near Ling Yi, talks about the Prometheus, and flaunts all he knows of Japan.

But they are interrupted by a woman named Virginia Wilson (Rosalie Craig).

Meanwhile, Jérôme sneaks into Lucien’s room and places something on his desk.

We then find Jerome caught by a few crewmembers while conversing with Clémence.

Eyk’s hallucinations continue, and he decides to follow the voices.

He walks into one of the bedrooms to find his family sitting by a fireplace, sewing and reading.

He is freaked out. His daughter, Nina, tells him that her mom still experiences those dreams.

Eyk tries to tell himself that all these are not real.

He finds himself waking up in a hidden room under one of the floorboards, without anyone but beetles.

Strangely, he finds a triangle drawn on the floorboard.

Maura discovers a small triangle tattoo on the boy’s neck. But the boy grabs her arm and gestures to her not to say anything.

Eyk is running out of patience.

He enters the room and anxiously demands what happened to Prometheus, but he finds no answer.

Eyl tells Maura about meeting with his dead family and decides to investigate the secret room. But before he could find anything, Olek found him.

Olek was given a task and has come to tell Eyk that the bunkers are halfway loaded and asks when they’ll be back on course, but Eyk is quite unsettled for a response. He instead closes the door.

Maura confronts the boy that she has been looking for her missing brother for four months.

She believes he is on the Prometheus but can’t find him anywhere.

She reveals that the letter was sent from him. There is a triangle on the letter, too, as the boy’s tattoo.

We find that Ángel and Ramiro are neither brothers nor a priest.

He’s instead a Portuguese servant.

They are arguing, but it turns into a make-out session.

We see Daniel placing a beetle on the carpet and marking that the rug has triangles printed all over.

Ada finds the beetle and trails it, which leads her to Daniel.

1899 Episode 2 Ending Explained: What happened to Ada? Is Ada dead?

The passengers are called to assemble in the dining room, where Eyk announces turning the ship around to the Prometheus.

Everyone is displeased by this.

Eyk states that there’s not enough coal to help them reach their destination. Lucien loses his anger and yells at him.

Maura asks Eyk to tow towards America, but he wants to discover what is wrong with Prometheus and why the company is trying to cover it.

She’s given a letter which disturbs her, but she doesn’t reveal hers. Instead, she asks Eyk to rethink his decision.

Eyk walks out to find passengers gathered around Ada, lying dead on the floor.

Daniel has a photo of Maura, but their connection is yet to be discovered

As the episode ends, we see Eyk looking up to see the frame changing.

It seems as if someone is watching several characters on multiple TV screens, which suddenly turn black

Episode 2 of 1899 reveals a part of everyone’s secrets. Daniel is in some way connected to Maura.

It also seems that someone is watching the ship along with the passengers. Stay tuned to find out more