In House of the Dragon, King Viserys’ death is a critical point as this was the starting point of the Civil War, aka The Dance of the Dragons, i.e.

DOD is basically the war between Aegon II Targaryen and his older sister Rhynera Targaryen for the Iron Throne.

But, after King Viserys’s death, some of the Targaryens supported Aegon II, the son born to King Viserys’s second wife, Alison Hightower, to claim the Throne rather than Queen Rhaenyra.

Rhaenyra Targaryen was killed by Aegon II, who ordered his dragon Sunfyre to burn her alive and then eat her, and Aegon II forced Aegon III (Rhaenyra’s youngest son), who was small at that time, to watch his mother getting devoured by Sunfyre.

Towards the end of the Civil War, aka Dance of the Dragons, Rhaenyra Targaryen managed to claim the Iron Throne.

Aegon II Targaryen fled from King’s Landing and went to Dragonstone with the help of the remnants of The Greens.

After that, Rhaenyra Targaryen sat on the Iron Throne for six months, and because of this, Rhaenyra was called The Half-Yearly Queen.

Just like her father, King Viserys, she also started getting cuts from Throne, which suggested that the Throne had rejected her and she was not fit to be a queen.

The Greens took most of the gold away for safekeeping, so all Rhaenyra was left with a quarter of the treasure; her brother and the Greens already took the rest.

This was a difficult time to rule as a Queen. Because of the civil war, the Crown desperately needed financial support, and with only one-quarter of the treasure left, Queen Rhaenyra had no choice but to raise the taxes.

Rhaenyra was called names such as King Maegor with t#its and the w#ore of Dragonstone.

The smallfolk believed that it was Rhaenyra Targaryen who had killed Helaena.

After that, the final nail in the coffin was when House Valerion also abandoned Queen Rhaenyra Targaryen’s side.

A massive riot occurred in the city because of the high taxes and Helaena Targaryen’s death.

Therefore, Queen Rhaenyra had no other option but to flee King’s Landing and sell her Crown to buy safe passage.

Queen Rhaenyra decided to go to Dragonstone, unaware that her brother Aegon II was already there.

Upon reaching the Dragonstone, she was betrayed by her closest, Ser Alfred Broome, a knight from House Broome. He killed all her Queens Guard and handed her over to Aegon.

So this is how Rhaenyra died, and the Sunfyre dragon killed her. 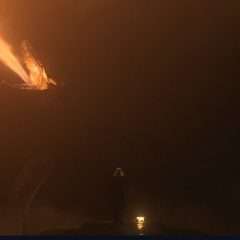