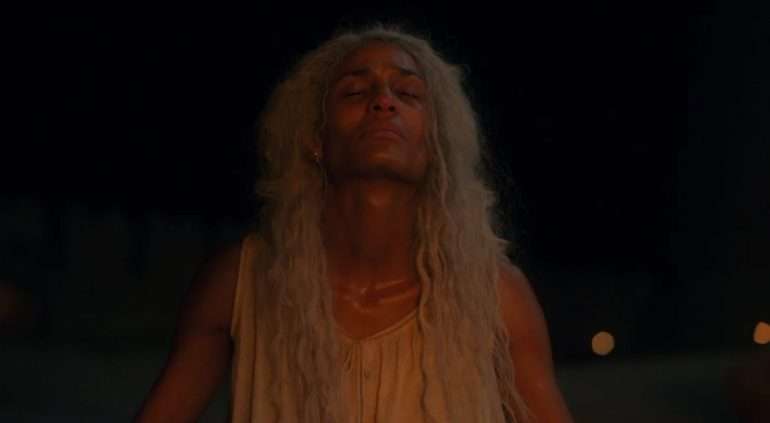 The scene was so emotional to watch as Laena says “Dracarys”; we see Vhagar is hesitant about killing her master, but later on, the beast finally gives in to her master’s wish and burns Laena alive with her Dragonfire.

The whole scene was so beautifully portrayed that it showcased a Targaryen’s strong bond with their dragons.

Even in the scene, Vhagar behaves at first by Laena’s wish and then eventually realises her master’s pain.

Therefore Vhagar eventually gives in to the wish of her master and finally gives Laena an honorary death by Dragonfire as per the Targaryen tradition.

Why did Laena Velaryon kill herself?

Towards the end of Episode 6, we saw Laena Velaryon was married to the Rouge Prince, Daemon Targaryen, and both of them had twin daughters, Rhaena Targaryen and Baela Targaryen.

In Episode 6, we see that Laena Velaryon is pregnant with the third child. When she goes into labour, the Grand Maester states to Prince Daemon that they are unable to deliver the baby, and there is no other option but cesarean delivery (C section).

The cesarean delivery we have already witnessed in The House of the Dragon Episode 1, where Queen Aemma Targaryen’s belly was cut open to deliver the baby on Viserys I Targaryen’s orders, she died due to blood loss, so when the same suggestion Grand Maesters put in front of Daemon, he asked whether Laena will survive the cesarean delivery in reply the Maester responded no.

Laena Velaryon overhead everything between the Maester and Daemon, and therefore she takes the matter into her hand, as she doesn’t want to die due to blood loss or the pain of childbirth. She wanted an honorary death in true Targaryen fashion.

Hence Laena goes outside the castle of Driftmark and goes to her favourite dragon Vhagar and commands Vhagar to kill her with Dragonfire.

Although Vhagar is hesitant at first as she doesn’t want to kill her master and rider, Vhagar understands Laena’s pain, gives in to her master’s wish, and offers her an honorary death by dragon fire.

The whole scene was so beautifully portrayed that we understood the bond between a Targaryen and her dragon and how intelligent the dragons are, as Vhagar understood the pain Laena was in. Still, she was very hesitant while killing her master with Dragonfire.

But do you know that Laena died very differently in the books “The Song of Ice and Fire” and House of the Dragon? Her death scene was tweaked in the series because George R R Martin wanted to give her proper respect and a send-off in the true Targaryen fashion.

I’m sure you want to know the details of how Laena died in the books. Well, don’t worry. We have you covered; please find the details below.

Laena died very differently in the books “The Song of Ice and Fire” and House of the Dragon? Her death scene was tweaked in the series because George R R Martin wanted to give her proper respect and a send-off in the true Targaryen fashion.

In the book, When Laena became pregnant and went into labour, she gave birth to a twisted and malformed son.

The son died just 1 hour after the birth, and all of Laena’s strength was gone to deliver the babe, and after coming to know that the babe had died, she further grieved over the loss of her child and then the childbed fever set in.

Childbed fever is a type of fever that kicks in due to an infection after childbirth. Laena’s fever drained all her strength, and even the Grand Maesters couldn’t heal her from her state.

Just three days after losing her baby and the sickness, Laena died.

It was said that Laena tried to reach her favourite dragon Vhagar just for the last time to fly, but before she could do that, she collapsed on the tower steps and died.

After Laena’s death, Daemon was devasted. He took her wife’s body back to the bed and mourned her death.