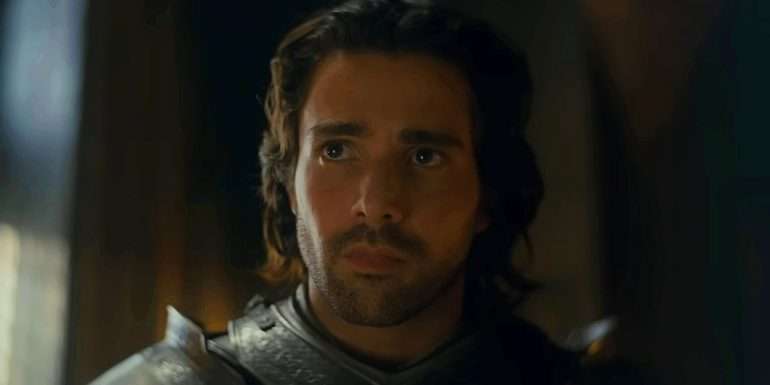 Butcher's Ball: What happens to Ser Criston Cole in the Dance of the Dragon? How did Criston Cole die? (Image Credit: HBO Max)

He is also known as Cole the Kingmaker, a name Aegon II Targaryen gave.

Criston Cole was born at the Blackhaven in the Dornish Marches.

In the first episode, we saw Criston participate in a tournament at Maidenpool.

In the tournament, Daemon challenged Criston in a battle and in the battle, Criston knocked the dark sister out of Daemon’s hands and shocked everyone in the court.

After that, he gave the victor’s laurel flower to Princess Rhaenyra Targaryen.

Later on, Criston Cole was selected as Rhaenyra’s own personal sworn shield because she had seen Criston fighting in the tournament.

In Episode 5, we see Criston and Rhaenyra grow close and eventually end up having intercourse.

After that, in episode 6, when Rhaenyra’s marriage was proposed to Lord Laenor, both Rhaenyra and Laenor also spoke about their terms of marriage.

Rhaenyra stated that they would obey their duty to the realm and have children with one another but not out of love.

Rhaenyra was also aware of Laenor’s interest in men, so she also stated that outside their marriage, they would follow their own interests, which means Laenor will continue his romance with Ser Joffrey Lonmouth, and Rhaenyra wishes to continue her relationship with Ser Criston Cole.

While returning to King’s Landing, when Ser Criston Cole expressed his feelings to Rhaenyra and told her to run away with him so they could get married outside the realm and be away from all this mess.

But Rhaenyra disagrees with that.

She tells Cole that she and Laenor have made arrangements for their marriage where she can still be with Cole even after her marriage with Laenor.

Cole thinks Rhaenyra was asking him to be her w#ore, which is against the honour of Cole. Hence he decides to end the relationship.

After that, in Episode 5, we see Cole beating Joffrey Lonmouth to death after he provokes Criston about him and Rhaenyra’s secret affair.

Then at the end of Episode 5, Criston tried to kill himself with a knife.

After that, when King Viserys passed away, a few Targaryens supported Aegon II’s claim to the throne rather than Queen Rhaenyra’s.

King Viserys Targaryen’s death was just a starring of the Dance of the Dragon, and Ser Criston supported Queen Alicent’s House, aka the greens for King Aegon II’s succession.

Also, much later, during Aegon II’s reign, when the King became frustrated by his current hand of King Otto Hightower, he gave Ser Criston the title of the hand of the king, which made Ser Criston the most powerful man in the Seven Kingdoms.

Ser Criston Cole died while marching from the Godseye to Blackwater.

Cristion and the greens were met with an army of Blacks led by Ser Pate of Longleaf and Roderick Dustin, aka Roddy the Ruin.

In the fight, Ser Criston Cole was killed by archers on the orders of Pate and Roderick. This fight is known as The Butcher’s Ball.

During the Dance of the Dragon, Cole marched with the 60 thousand armies of Greens to Harrenhal, located at the northern shore of Gods Eye lake, to take back from Daemon Targaryen.

But Daemon Targaryen, at that time, had left the Harrenhal to support Rhaenyra Targaryen in the attack on King’s Landing.

When Cole marched through the Harrenhal with the greens to meet Hightower’s host, he found out that the blacks had already destroyed villagers and polluted waters on his line of march to deny supplies to the greens.

While marching at Crossed Elms, a village west of the Gods Eye in the Riverlands, most of the greens were killed due to an ambush panned by Black Trombo.

But Cole kept marching on from the Godseye to Blackwater. Criston Cole and the surviving greens meet with an army of Blacks led by Pate and Roderick.

When Criston yielded and asked the blacks whether they would at least spare the lives of the other greens and kill him instead, his yield was refused, and archers shot Criston Cole on the orders of Pate and Robb.

This fight is known as the Butcher’s ball, and Ser Criston Cole died at the battle of Butcher’s Ball.

After Criston died, the remaining greens tried to fight the blacks, but they were defeated.

After the death of Ser Criston Cole, the Garibald and Pate, aka the blacks, bought Ser Criston’s head on a spear in the Battle of Tumbleton, which was fought between the greens and the blacks at Tumbleton.