Caraxes, The Blood Wyrm: How strong is Caraxes Compared to the rest of the Dragons? And How did Caraxes die in the House of the Dragon? (Image Credit: HBO)

Caraxes, The Blood Wyrm: How strong is Caraxes Compared to the rest of the Dragons? And How did Caraxes die in the House of the Dragon?

House of the Dragon is set to feature ten dragons in total in the first season, and all of them are said to have a difference in size, colour and appearance.

One of the most interesting characters in the House of the Dragons is Daemon Targaryen, the rouge prince, the anti-hero in the series.

As Daemon Targaryen is one of the important characters in the storyline, he will be crucial to the Dance of the Dragon, and so will the Dragon that Daemon rides, Caraxes, aka The Blood Wyrm.

If you are also looking for that answer, you have managed to land on the right page. This article will explain everything in detail.

Caraxes, The Blood Wyrm: How strong is Caraxes Compared to the rest of the Dragons? And How did Caraxes die in the House of the Dragon?

Caraxes is called the Blood Wyrm because of his large neck size and his red scales.

Compared to other dragons, Caraxes has a comparatively long neck resembling a wyrm/snake, and because of his red scales, he is called the Blood Wyrm.

Also, coming to Caraxes’s demeanour is similar to The Rouge Prince, Daemon Targaryen.

Caraxes is considered the fiercer Dragon in the lot.

Aemon Targaryen, The Prince of Dragonstone, claimed Caraxes during the 72 AC.

Caraxes have been used in many battles throughout the House of the Dragons, which is why he is considered one of the most experienced and fiercest dragons in the whole of Westeros.

During 92AC, when Aemon died because of a crossbow bolt while Caraxes was eating a goat, after any other Targaryen did not ride that Caraxes, then later on during 105 AC, Daemon Targaryen claimed Caraxes.

If you consider the size, then Caraxes is not the enormous Dragon.

Balerion, The Black Dread, was the biggest Dragon ridden by Aegon the Conqueror during the War of Conquest.

Then Vhagar was the second biggest Dragon after Balerion, which Aemond Targaryen rode during the Dance of the Dragon.

The third was Cannibal, the wild Dragon that lived on Dragonstone during the Dance of the Dragons.

Caraxes is not the enormous Dragon compared to Balerion, Vhagar and Cannibal, but Caraxes was quite large compared to other dragons such as Dreamfyre, Silver Wing, and Syrax.

Plus, Caraxes was considered one of Westeros’s fiercest and fastest dragons.

During the Dance of the Dragon, Caraxes, ridden by Daemon, fought against Vhagar, ridden by Aemond Targaryen.

Both the Dragon fought in mid-air, where Daemon killed Aemond by stabbing him in the eye.

After that, both the dragons crashed in both mid-air and fell to the lake, Vhagar drowned after sustaining injuries and died, and Caraxes managed to swim ashore and died sometime later, while the body of Daemon was never found.

Even though Vhagar was twice the size of Caraxes, Caraxes could still match Vhagar in the sky.

Caraxes and Daemon will be one of the most crucial characters in the House of the Dragons, and we will surely see more of this duo in the coming future.

If you have enjoyed our article, please let us know what you think of Daemon and Caraxes in the comments below. 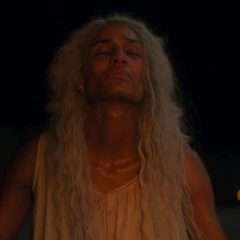