Sanemi Shinazugawa made his first appearance in Demon Slayer anime in Episode 22 of season one.

This was when Tanjiro Kamado was brought in the presence of all the Hashira at the Demon Slayer headquarters, where Tanjiro was put on trial.

Sanemi Shinazugawa has an intimidating personality. In addition, he has an amusing number of scars on his body.

He wears a Demon Slayer outfit with the Kanji of Kill written at the back of his outfit.

So now a question arises: Why does Sanemi Shinazugawa have so many scars?

Sanemi Shinazugawa has amassed these scars over many years due to fighting a large number of demons.

He has a very rare type of blood appealing to the demons.

He is never hesitant to cut himself as his blood acts as bait for demons.

Sanemi has a habit of quickly lashing out.

Sanemi’s potential, skills and strength were recognized by the Upper Moon one Kokushibo during their fight.

Sanemi’s blood type is scarce. His blood is mouth-watering for demons.

Even a few drops of his blood can cause the demons to lose focus and last out without thinking, exposing them to Sanemi to decapitate them.

His blood was also able to affect one of the strongest and longest-lived demons, Kokushibo.

Sanemi cut himself with his Nichirin Sword to test Nezuko Kamado, but Nezuko was able to restrain herself even if Sanemi’s blood was attractive to humans.

Sanemi has immense speed and reflexes, great stamina and a lot of him endurance.

Sanemi is super-strong. He is as skilled as Giyu Tomiyoka in a swordfight.

Sanemi was able to stand his ground against the most powerful Upper Moon Kokushibo, who is also a very skilled swordsman.

He is never afraid and hesitant to cut himself for his blood to act as bait, rendering the demons lose focus.

Sanemi has unimaginable muscle control, which allows him to close wounds and control the flow of blood in his body.

This muscle control ability allows and provides Sanemi with an advantage in fighting more extended battles.

Now the most critical question: Has Saenmi Shinazugawa awakened the Demon Slayer Mark?

Sanemi awakened the Demon Slayer Mark during his fight with Kokushibo.

This was the battle when Sanemi faced tremendous difficulties as he was severely injured, but the awakening of Demon Slayer Mark made him strong.

As a result, he was able to hold his ground against the strongest Upper Moon.

Sanemi Shinazugawa is the Wind Hashira and uses the Wind Breathing Technique.

Sanemi is considered the most powerful Wind Breathing Technique user of all time.

He was guided towards the path of being a Demon Slayer by Masachika Kumeno, who considered Sanemi as his brother.

Sanemi Shinazugawa has the fastest combating speed in the Demon Slayer core because of the Wind Breathing Technique.

He was able to match the speed of Kokushibo in speed during their fight.

The Wind Breathing Technique has Nine Forms, and Sanemi has mastered them all.

The nine forms of the Wind Breathing Technique are as follows:

Sanemi made an exceptional entry in the Demon Slayer anime in season one, which made his intentions very clear.

The wind hashira Sanemi Shinazugawa enters, holding the box containing Nezuko. Then, he pulled out his sword and stabbed Nezuko.

Tanjiro became angry and headbutted him.

The master of the mansion arrives and enlightens him about Tanjiro. All of them were shocked to hear that he had met Muzan Kibutsuji.

After listening that Shinzagawa was not convinced, he tried to give Nezuko his blood, but she turned her head.

All the hashiras, including Sanemi Shinazugawa, were convinced to let Nezuko fight as a demon slayer despite being a Demon.

There have been rumours that Sanemi is in love with Kanae. However, Kanae is the complete opposite personality of Sanemi.

Sanemi is aggressive in nature, whereas Kanae has an extraordinarily kind and gentle soul.

Therefore, their relationship is quite complicated.

Sanemi’s aggressive and rude behaviour caused him to worsen his relations with a lot of people.

Genya Shinazugawa made his first appearance in the Final Selection, where he misbehaved with the Demon Core Slayer members.

Tanjiro stopped him and asked him not to behave in such a manner.

Genya has an attitude just like Sanemi. Genya is rude and a bit discourteous.

Genya became a demon slayer in order to search for his older brother.

Sanemi always bad-mouthed Genya but deep down inside, he loved and cared for him. 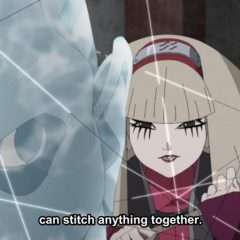