Boruto Episode 261 is titled “KAWAKI ENTERS THE NINJA ACADEMY!”. It is scheduled to release on Sunday, August 7, 2022.

The fact was Kakashi grabbed Boruto out of nowhere and made him carry all his things.

Kakashi gave Boruto an excuse, saying his back hurts whenever he carries something heavy.

After Boruto finished helping Kakashi, he offered some snacks to Boruto and asked him to eat them and recover his energy as they needed to go to some places after this.

Boruto was disappointed a little after hearing this.

As soon as Kakashi said It was another peaceful day in the hidden leaf Village, they heard some folks fighting among themselves.

This is an episode about two friends and their conflicts. So if you have missed Boruto Episode 260, you need not worry.

This article will discuss in detail the incredible turn of events in Episode 260 of Boruto: Naruto Next Generations, titled “Love Skyrockets”.

The Fight Between the Old Town and New City

This was a fight between two older men.

Boruto asks Kakashi shouldn’t we stop the fight? But Kakashi replies by saying Leave them be and pretend that we didn’t see anything.

In addition, Kakashi also said that he had his fill mediating fights between Naruto and Sasuke.

The family of the people who were fighting also joined the fight in an attempt to stop the fight.

Boruto, after watching this, said he couldn’t sit back and watch and went on to stop the fight.

The fight finally stopped for the time being.

During this, some tea fell on Kakashi’s face, but he didn’t react.

The shopkeeper, as an apology, asked for forgiveness and said there was no need to pay for the tea and snacks.

But Boruto refused to take on this offer.

Boruto asked the Shop lady about the fight because the fight seemed super intense.

So, the Shop Lady told them the story behind the fight.

It all started because of the fireworks display.

During the Festival, the Shop lady’s grandpa holds a fireworks display in Old Town.

That is the same Festival Boruto always looked forward to.

So Boruto came to know what the fight was all about.

The people fighting with the Shop lady’s grandpa were from the New City fireworks committee.

The Shop lady’s grandpa believed if someone launched fireworks before them, the people wouldn’t be excited about their fireworks.

So, conflicts have happened between the people from Old Town and New City.

Boruto was sad to hear that the people in the village were fighting.

The older man from the Old Town was Ohagi, and the one from the New City was Taruto.

After hearing this, Boruto decided to help them. And Boruto asks Kakashi to try to sort things out for them.

Kakashi was eating his dumplings and reading his favourite Make Out Tactics series.

Boruto thought that Kakashi didn’t hear a single thing, but Kakashi asked Boruto not to worry and said that he heard everything.

In addition, Kakashi said that It is the story of two individuals unable to be together because their families were quarrelling. It is a common story.

Kakashi adds that it also happened in Make Out Tactics Volume 5.

Boruto asked him what happened at the end of that. Kakashi replied that he had no idea as Volume 5 was so intense that many readers passed out.

It was so dangerous that the ending could only be found in the first edition.

Kakashi also didn’t read it, and he wished he could read it.

Listening to this, Yubeshi brought a book and asked Kakashi if he was referring to the same.

Kakashi was mesmerised after seeing this. It was the Legendary first edition of Make Out Tactics.

Yubeshi could not sell it at the flea market in the shopping district. She was thinking of throwing it away. She never thought that there was anyone who would want to read it.

Yubeshi was glad that she didn’t throw it away. Instead, she asked Kakashi to sort out things with their Grandfathers in return for that book.

Boruto said they finally got to reason with the people of Old Town and New City.

After entering Taruto’s shop, Taurto asked Boruto and Kakashi if they needed something.

Kakashi replied that they were asked to handle some business. Taruto asked if that was regarding the fireworks display.

Boruto said that they just want Taruto and Ohagi to get along.

Taruto said that he went out of his way to go over and talk things over, but Ohagi and the people of the Old Town had so much attitude.

Boruto said that there was no point in taking out his anger on him.

Taruto said this was a cake shop, and if Boruto and Kakashi were not buying anything, they should leave.

Boruto insisted that Taruto should listen to what Kakashi had to say.

After taking a walk in Taruto’s shop, Kakashi found that Taruto and Ohagi were good friends by glancing through a photograph.

As Kakashi and Boruto were about to leave, Sabure stopped them and said he was sorry about his grandfather.

Kakashi figured that Sabure didn’t take the time to come after them to apologise.

Sabure said that there is a reason why his grandfather was like that.

Sabure said that Taruto was the only person from New City who participated in Old Town’s fireworks display. That explained why he was so close to Ohagi, and they would go on trips together.

The New City started talking about having a firework display of their own, and Taruto was put in charge.

Taruto felt terrible and tried apologising to Ohagi many times, but Ohagi didn’t listen to him.

The Meeting at Hokage’s Office

Boruto then went to Ohagi and said he wouldn’t leave until Ohagi talked things over with Taruto.

Ohagi said he couldn’t allow the Hokage’s son to lose his face and agreed to listen to this once.

So, Old Town and New City people were called for a meeting at the Hokage’s Office in the presence of Kakashi and Boruto.

They had an intense word fight.

Kakashi said that getting along will be impossible since it has come to this.

Kakashi said that in that case, they should settle this once and for all and decide which one of them will have a fireworks display.

Kakashi also added that there would be two rules.

Both Ohagi and Taruto agreed on this.

Kakashi’s Way of Solving the Conflict

Boruto was worried because he believed that if they competed against each other, they wouldn’t even think of making up.

Yubeshi and Sabure asked Kakashi if they could trust him. Kakashi asked them to rest assured.

Kakashi believed that the fireworks display would solve everything once the night falls.

It was time for the fireworks.

The fireworks were switched. Kakashi switched them.

After the fireworks, there was another meeting at the Hokage’s office between Ohagi and Taruto.

The one who had the best fireworks will be in charge of fireworks from here on out. But none reacted.

Both Ohagi and Taruto were not ready to accept defeat.

Yubeshi said that she and Sabure could never be happily married at this rate. Ohagi and Taruto were shocked after hearing it.

They didn’t say anything because both of their grandfathers were fighting.

Ohagi and Taruto were ashamed to put their grandchildren through some rough times.

They finally decided to end the fight and be friends again. They also agreed on their Grandchildren’s marriage. 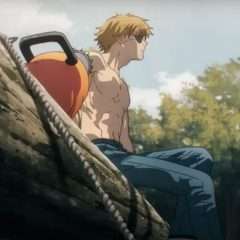