Spy X Family episode 10 just dropped in. Spy X Family is the anime that once again took the top position and ranked first in the top 10 trending anime of the week.

Spy X Family episode 10 started with the elegant schedule of Mr Henderson, where he starts his day by jogging.

After jogging for a while in the morning, he greets the statues of his ancestors.

The schedule of Mr Henderson is also elegant.

Mr Henderson takes a bath, polishes his shoes, gets ready, and then prepares his coffee elegantly.

Mr Henderson greets the other teacher Good Morning and asks him for coffee.

They discuss this while drinking coffee, where his co-teacher asks him about his opinion on the students admitted to Eden Academy (the most prestigious School in Ostania) this year.

According to Mr Henderson, The elementary students who have passed through the gates of Eden will learn to preserve traditions passed on to them as they try to become more and more elegant each day.

Eden academy stands for making the future of Ostania elegant.

When Mr Henderson reached School, The son of Donovan Desmond, i.e. Damian Desmond and Anya, were in a fight where they argued about a particular something.

This episode is all about the Dodgeball match in the PE session where the MVP of the winning team will get a Stella Star.

Anya getting a Stella Star is very important for Twilight’s mission.

This article will explain in detail the turn of dramatic events that took place in Spy X Family episode 10.

Anya returns home from school, where Anya tells Loid that she has a piece of good news.

But Loid is already aware that a Stella Star is being rewarded to the MVP of the winning team in the dodgeball match in the PE lesson next week.

Anya asks Yor to teach her a finisher move in dodgeball

Yor is excited and says she will lead Anya to the finisher ball strike.

After hearing this, Loid asks if Yor is good at sports, and Yor says no.

Yor tells Anya we will catch a Stella Star with the finisher strike.

Anya decides that she will work hard to catch a Stella star in the dodgeball game.

Yor explained to Anya that you don’t throw your ball with only your arms’ strength.

First, you must take a step forward firmly, twist your waist while shifting your weight, transfer the force to your shoulder, and then throw it.

Loid decided to leave the training of Anya to Yor.

Mr Henderson asks all the students to have a fair and elegant game in the spirit of the nobles.

The dodgeball game is between Class 3, Cecile Hall and Class 4, Wald Hall.

There is no other way to become the MVP in a dodgeball game than to win a Stella Star.

For class 3, i.e. Anya’s class, to win the match, they have to defeat Bill Watkins of class 4, who is an excellent dodgeball player.

Bill Watkins is the son of the National Army’s major. He is also known as Bazooka Bill.

Bill Watkins has an excellent physique and intelligence.

Bill Watkins is a monster who has won numerous ball game competitions since his kindergarten days.

Damian and his friends try a lot of moves to defeat Bill, but Bill is quite challenging and skilful.

Bill aims for Desmond, but one of his friends saves him by taking the hit.

Watkins almost took down all the players of class 3 single-handedly.

Bill now targets Anya and aims for her feet.

But as Anya is a psychic and can read Bill’s mind, she comes to know that Bill is aiming for her legs, and she dodges it by jumping.

Damian wanted to win and stand out alone to get the Stella Star.

Bill tried many moves to hit Anya but couldn’t manage to land a single hit.

Anya dodged all the balls thrown by Bill Watkins.

Bill was frustrated because Anya had read all of his pitches.

Just distracted by it, Anya fell by twisting her feet.

Bill thought that even if Anya could read his moves, she could no longer read dodge his throw in that position.

Bill threw the ball with everything he got towards Anya, but Damian saved Anya as he caught the ball.

Spy X Family Episode 10 Ending Explained: Who was the MVP of the Dodgeball Game

This is the most dramatic phase of the episode, where Anya remembers Yor’s teaching of how to throw the ball.

Everyone was intrigued by Anya’s stance and steps to throw the ball.

Finally, Anya threw the ball, but it didn’t hit Bill.

Bill caught the ball and threw it toward Anya, and Anya was defeated.

Everyone thought that Bill was sure to win the Stella Star.

Mr Henderson did not give Bill Watkins the Stella Star because of his strong language during the match.

The episode is indeed dramatic and fun to watch.

Spy X Family episode 11 is scheduled to release on June 18, 2022. It is available to watch on Netflix and also on YouTube Channels named MuseAsia and MuseIndia. 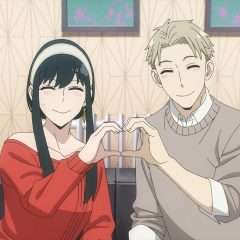