Who will Mikasa marry in Attack on Titan? Do Jean and Mikasa end up together at the end? (Image Credit: MAPPA)

Who will Mikasa marry in Attack on Titan? Do Jean and Mikasa end up together at the end?

Who will Mikasa marry in Attack on Titan? The fans have had this question for quite some time, and especially after the cliffhanger ending of Season 4 of Attack On Titan, the question is now evident and demands an answer from AOT makers.

If you are also looking for this answer, you have managed to land on the right page. As an avid reader/watcher of AOT manga and anime, I believe I can provide an answer to this, so read along to know the details on Who does Mikasa marries in Attack on Titan?

Who will Mikasa marry in Attack on Titan?

As per the ending of Attack on Titan Chapter 139, we believe Mikasa didn’t marry anyone after Eren’s death. However, some fans believe she married Jean afterwards. We will explain our theories on both scenarios in the following article. Read along to know the details.

Our first theory is that Mikasa didn’t marry anyone and continued to love and cherish Eren’s memories till the end of her days.

In Attack on Titan Chapter 139, “Toward the Tree on That Hill,” Eren, after Mikasa decapitated his head, had a brief chat with Armin Arlert.

For a brief period, both discussed about Mikasa when Eren revealed that he had always loved Mikasa and even now he wants to be with her but that is not possible.

When Mikasa took Eren’s decapitated head and kissed Eren for one last time, they shared an emotional moment.

Even after Eren’s death, Mikasa continued to visit his grave, and it was evident as per the finale, that she missed him a lot and wasn’t able to recover from the loss initially.

It is certainly not easy to kill the love of your life. However, what she did took courage as the whole of humanity was at stake.

But as per our theory, whether Mikasa marries anyone? We think that Mikasa didn’t get married because Author Hajime Isayma left the ending open to let the readers conclude with the finale.

Our theory supports the following conclusion cause we saw that Mikasa added four roses to Eren’s grave at the end.

Usually, everything has a meaning in AOT. The number of roses she had on Eren’s grave proves that Eren was the only one in her life, and she never married anyone else.

Also, there was a Lily flower at the end, which she added. As per the traditional Japanese culture, the Lily flower represents a woman of pure heart who died a virgin.

Isayama has always used flowers and languages to convey emotions and ideas.

We also saw a kid with Mikasa, so who is he? As per our theory, that kid is adopted cause, as we know at the beginning of Attack on Titan, Mikasa was also an orphan who had lost everything until Eren gave her a family.

So we think Mikasa also decided to do the same she felt of saving someone who had lost everything just like her at a young age; hence she took care of that boy as an orphan and raised him as her son.

This signifies that even though she moved on, she still stayed true to her heart, as she was never a slave and till her last breath, she loved Eren and cherished all his memories.

Isayama has always said that Attack on Titan Ending will always be about Eren, Mikasa and Armin, and that is what has happened exactly.

Then a kid being on Eren’s grave from his early days to the last days of Mikasa can mean that Eren could be a father figure he never knew as this kid but maybe Mikasa has taught him about how brave Eren was and what sacrifices he made in order eradicate Titan race from the world.

“A father died at war to save humanity”

So this theory might explain about the kid shown at the end, still in his younger years leading Mikasa there to pay respect to Eren for one last time.

Our Second theory: So, do Jean and Mikasa end up together?

Well, this theory has neither been confirmed in the manga nor by the Attack on Titan author Hajime Isayama.

Although some people believe Jean had always had feelings for Mikasa, the same he had also dreamt in Attack on Titan Season 4 Episode 25 (Attack on Titan Episode 84).

In Attack on Titan Season 4 Episode 25, Jean dreamt of having a life and a family once the rumbling was over, and as it was showcased in that episode, Mikasa had always been Jean’s dream girl.

But at the same time, Mikasa never had any feelings toward Jean, but that doesn’t mean that she hated him.

On the contrary, she was always so involved with Eren that she wasn’t aware of anyone liking her.

Well, all know that Mikasa had always loved Eren, but as per the ending of the manga, Eren died. In the last monologue, Mikasa was shown with family, so as per our second theory, we think Jean had persuaded Mikasa after the finale chapter.

At that time, Mikasa was vulnerable, so Jean might have remained consistent in persuading Mikasa and helping her get over Eren and finally, they got married and had a child. 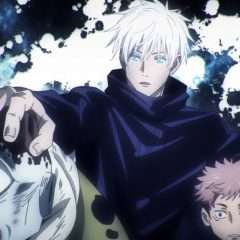