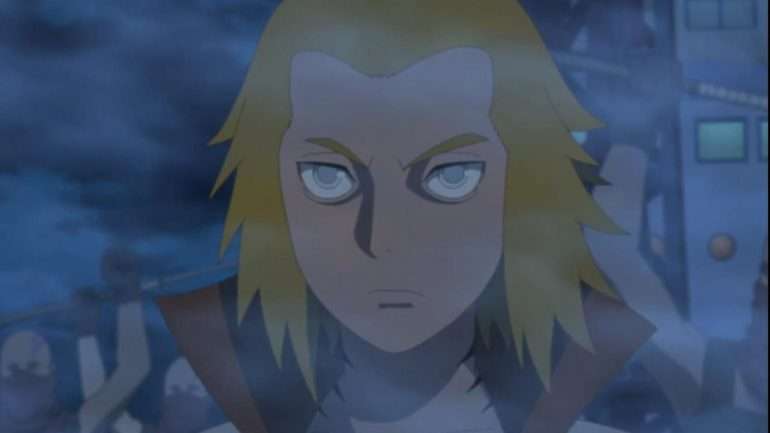 Boruto Episode 251 was one of the best episodes in the entire series.

Even though it was exactly the same time as any other episode, it hooked up the fans for a complete-time as so much happened in a span of just 23 minutes.

Ikada gained his powers and thus now controls the Funato.

He will lead the Funato towards an all-out war with the Hidden Mist Village to gain control of the Land of Waters.

Araumi Funato believes in Ikada’s powers and wants to use them to destroy the Hidden Mist Village.

Meanwhile, Boruto, who has just come to this realisation, wants to step up and stop this War.

He wants to stop this cycle of hatred and bring Ikada back to his old self. Will Boruto succeed?

In the comments below, list down your thoughts about what you think might happen Next Time on Boruto: Naruto Next Generations Episode 252.

Boruto Episode 252 Release Date and Where to Watch Online?

Boruto Episode 252 is titled “The Desire to Believe” and is scheduled to release on Sunday, the 5th of June 2022.

Boruto Episode 252 Spoilers and What to Expect?

Boruto Episode 252 will be very interesting to watch. Boruto, along with Sarada and Mitsuki, is set on their journey to meet the Mizukage of the Hidden Mist Village, Chojuro.

Boruto believes that he can convince the Mizukage to Stop the War.

He wants to stop more bloodshed and considers himself to be the reason why Ikada decided to fight.

So he wants to bring back peace and stop this cycle of hatred.

In Episode 252, Boruto tries to convince Mizukage Chojuro to give him a chance to stop the War by talking things out with Ikada.

Chojuro, though enraged about Kagura’s death, knows that if he can stop the war in a peaceful way, he can save many lives.

So Boruto might stand up against Ikada and try to convince him to stop the attack on the Hidden Mist Village.

Ikada, meanwhile, is engulfed by hatred and might not stop at any cost.

So, Boruto and Ikada might have to fight each other.

Ikada might also try to avenge his Sister, Seirin’s death by killing Boruto.

Also, Boss from the Island of Shipbuilders and Ikada’s master might come and try to stop Ikada from starting this bloodshed.

Will Ikada listen to his master, whom he respected and admired so much? Will he listen to Boruto’s reasoning?

Will he believe in Boruto? Or will Ikada destroy the Hidden Mist Village and kill everyone who comes in his path.

Let us know what you think in the comments below. Can Boruto stop this War, or will he die at the hands of his friend?

He is very sad and furious and wants to avenge Kagura.

He always hoped that Kagura would become the next Mizukage of the Hidden Mist Village.

Isari plans to dethrone Araumi and take over the Funato clan as its new leader.

He believes that Araumi’s plan would lead to the total annihilation of the Funato and thus wants to save them.

Just as he was discussing the terms with Mizukage Chojuro, Araumi Funato makes a live broadcast announcing that they will attack the Hidden Mist Village with full force.

He also adds that his son, Ikada, will take over and lead the Funato clan towards victory.

Immediately after that, Iguro’s weapon, which was gifted to him by his father, attacks Iguro and kills him.

It then also attacks Mizukage Chojuro but is stopped by his assistant by slashing it to pieces.

Araumi says that he would crush all those who come into the Funato’s path, including his own blood.

Iguro’s death was a surprise and showed that Araumi knew that he would turn up against them and join the Mizukage of the Hidden Mist Village.

Ikada declares that they will attack the Shinonome region of the Hidden Mist Village with their full force and destroy it. Then they will take over the complete Land of Waters.

He decides to reach the Shinonome region by the shortest route, which involves passing through the most dangerous region of the sea, the Sea of the Death.

Fierce winds in that region make it impossible to sail through, but Ikada has decided that they will take that path, and he will lead the Funato through it by himself.

Meanwhile, on the other side, Boruto has learned the truth about Ikada’s identity and heard the complete declaration of War by Ikada over the Radio.

He thinks he pushed Ikada over the edge and made him join the War and turn against his dream.

Boruto confesses that he only wanted to avenge Kagura but never thought that this cycle of hatred would return back in such way.

Later on, there is a debate among him and his friends on what they must do.

No one can accept that Ikada is Araumi Funato’s Son and that he could fight. But after hearing this, there are two sets of opinions.

Buntan and Kyoho want to avenge Kagura and Heibiichigo by fighting and destroying the Funato.

Metal, too, wants to avenge Heibiichigo; meanwhile, Denki, Iwabe, Sarada, and Mitsuki cannot believe that Ikada would do such things.

Boruto is devastated, and Kawaki is stern and explains that it is a war and Boruto must fight whomever he needs to.

Meanwhile, Mitsuki asks Boruto what does he wants to do and feels right?

Boruto says that he wants to stop this War and therefore believes that he could convince the Mizukage Chojuro.

Sarada and Mitsuki also want to support him and decide to go with him.

Suddenly Buntan and Kyoho block their path and try to stop them.

They do not want to stop the war and want to avenge Kagura and Heibiichiogo’s death because they cannot rest in peace.

Iwabe jumps in and blocks their attacks with his Earth Style, while Denki joins in, too, using his lightning style to stop Kyoho.

They ask Boruto, Sarada, and Mitsuki to go and do what they think is right.

They support Boruto and thus go against the others so that Boruto can go.

Boruto also takes Kagura’s Ninja Blade, the Hiramekarei, to deliver it to the Mizukage Chojuro.

Meanwhile, Metal is confused about whose side he should pick.

He wants to avenge Heibiichigo but cannot go against his friends and does not want to fight them.

Kawaki is in his own thoughts and has difficulty understanding Boruto.

He does not support his actions but will not stop him either.

What Kawaki will do next is a mystery.

What do you think he will do? Will he, too, fight Boruto?

Lastly, Boss from the Island of Shipbuilders and Ikada’s master wants to stop Ikada too and has set sail into the raging sea after hearing the news.

He will try to stop his disciple from going the wrong path.

Together Boruto and Boss might be able to stop Ikada and prevent him from taking this wrong step.

Do you think they can do it? Let us know your thoughts on this matter in the comments below.

And do not forget to watch the upcoming episode this coming Sunday.