Spy X Family Episode 8 just dropped in. The episode started with Anya being in the school attending a mathematics lecture.

The teacher wrote a question on the board and asked for the solution for that question. He particularly requested this question to be answered by Anya Forger.

Anya stood up with confidence in a dramatic way and answered the question.

Everyone in the class gazed at Anya with surprise, and a sudden response came from the teacher, suggesting the answer be incorrect.

This was the end of the class.

The next target for Anya was to achieve eight stellar stars in just four months.

One of the informants acquainted with Loid Forger within the city hall was busted the same morning.

As a result, the enemy tightened its grip.

Yuri Briar, the brother of Yor, visited Loid and Yor to celebrate their marriage.

This article will explain in detail the turn of events that took place in Spy X Family episode 8.

Loid had a meeting with his senior. In the meeting, Loid was asked about his mission and the academic skills of Anya.

The senior of Loid also taunted Loid that he has become a lousy liar.

One of the informants from the same spy agency as Loid within the city hall was busted the same morning.

The enemy was tightening their grip as a countermeasure.

So Twilight (Loid Foger ) was specially asked to take precautions.

The counterintelligence agency in the country where Loid is supposed to carry out his mission is quite formidable.

The State Security Service started arresting the people on suspicion of espionage.

The arrest took place in the same place where Yor works.

One of Yor’s co-workers tells her about it.

The person was arrested for selling out the documents from the city hall.

One of Yor’s co-workers asks Yor about the news of her marriage being told to her brother.

Yor forgot to tell her brother about the marriage to her younger brother.

She also failed to tell her more youthful brother about her new home number.

After the registration, she was so relieved that she had let many things slip away.

Her friends were surprised and asked her how she had forgotten about telling her younger brother.

The person who was arrested on suspicion of selling the documents from the city hall was enquired at the State Security Service headquarters.

The questions which he was being asked were:

The person who was arrested was insisting on letting him go home.

The State Security Service is:

They earned the nickname “Secret Police” from the citizens.

Yuri Briar is the character everyone was excited to see in Spy X Family.

He is the brother of Yor.

He is just 20 years old, and this man is a secret police officer.

He was elite in the Ministry of Foreign affairs and skipped grades.

He is an excellent investigator, and he had all the proof against the man that was arrested.

He asked the culprit to answer all the questions as he had evidence against him.

The man answered that he had handed the documents and got the money as he was told.

He didn’t know anything apart from his client being from the West.

He knew the name twilight as twilight was super famous and known as the master of disguise.

Yuri says he will do anything to protect the country his sister lives.

He was planning to celebrate his sister’s marriage the same night.

Yor was worried about their cover getting blown up (about their marriage).

But Loid asks Yor not to worry because he has prepared a “complete set of loving couples for such occasions.

Yuri is an overthinker when it comes to his sister.

Finally, Yuri rings the bell, and Loid welcomes him to the home.

He also asks Yuri to let him take his coat and luggage.

Yuri and Yor talked for a while.

Yuri bought a bottle of wine in the hope that he would come to know Loid’s true desires.

All the events were quite funny.

Loid figures out from the information from his informants that Yuri works for The State Security Service, which is a counterintelligence agency.

Yuri says that the guy Yor married has to be able to protect her more than Yuri could.

This was the end of an interesting episode of  Spy X Family. 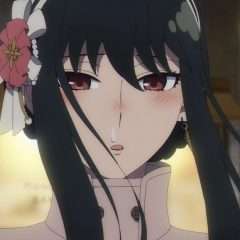