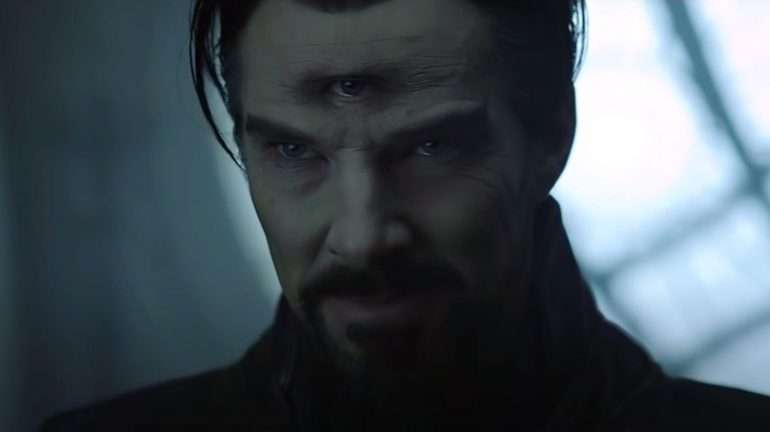 If you are looking for an answer to such questions, then you have managed to land on the right page in this article. We will be explaining in detail the third eye of Doctor Strange showcased in Multiverse of Madness.

In Doctor Strange in the Multiverse of Madness, Wanda’s motive was to take America Chavez’s powers in order to traverse the Multiverse and reunite with Billy and Tommy in some other Universe.

Wanda was under the influence of Darkhold and discovered and learned that she could reunite with her son Billy and Tommy in some other universe. But, for that, she needed America Chavez’s powers to traverse through the Multiverse.

Therefore Doctor Strange’s primary motive was to save America Chavez and stop Wanda from spreading the chaos across the Multiverse. To do that, Doctor Strange required the book of Vashanti, which would allow him to defeat Wanda.

In Doctor Strange in the Multiverse of Madness, when Wanda destroyed the Book of Vashanti, and Doctor Strange of Earth 616 and Christine Palmer of Earth 838 were sent to a universe where the Incursion had already occurred.

He used it to find a universe where he could be happy with Christine but unable to find any; therefore, if Doctor Strange of Earth 616 wants to use it, he must give the Christine Palmer of Earth 838, after which he would only let him use the Darkhold.

Well, this universe’s Doctor Strange, aka The Sinister Strange, was responsible for the Incursion of this universe, which killed Trillions of people, and the only sole survivor left was him.

So in the film, when the Third Eye of Sinister Strange opened, fans believed that is because he might have used the Darkhold extensively, and that is why the third eye got opened, which represents the evil in Sinister Strange.

Still, later on, we also saw the same happening to Doctor Strange of Earth 616 at the end, which raised the confusion of what is the truth behind the third eye.

There are two theories associated with Doctor Strange’s Third Eye. The first Explanation is below.

The Third Eye is a manifestation of the Eye of Agamotto, the creator of Vishanti and the sorcerer supreme of the stone age.

Originally, Agamotto was taught mystic arts by Oshtur (one of the Elder Gods of Earth). After which, Agamotto served as the Sorcerer Supreme of the Earth and defended the planet from external threats. He was also responsible for assembling the stone age Avengers.

Agamotto was the one who created several magical artefacts such as “The Eye of Agamotto,” which Doctor Strange of Earth 616 uses, “Orb of Agamotto,” and finally, the Book of Vishanti, which is the perfect counteragent of Darkhold.

The Eye of Agamotto, as stated above, is powerful and can be used to find disguise and illusions, see past events, and can also be used to open portals.

Therefore we think the Third eye appeared in Sinister Strange way before he started using Darkhold, but he had used the Darkhold extensively in his universe, and that’s why even though he had the third eye, he couldn’t fully comprehend its powers.

There is a second explanation of the Third Eye, which New Rockstars Youtube Channel has given. This Explanation is directly linked to the Darkhold.

As stated by Sinister Strange in the film that Darkhold takes a heavy toll on its users, the same we witnessed in the film as Wanda, who used the Darkhold, turned out to be so evil that she went on killing people across the universe.

The same Darkhold was used by Doctor Strange of Earth 616 as well, and he used Darkhold to raise Defender Strange’s dead body to defeat Wanda.

We saw that the soul of the damned initially stated that Dreamwalking in a dead body is forbidden and attacked Strange. Later on, Strange manages to conjure all the souls on himself and fights Wanda. But in the process, he might have been cursed by the souls of the damned, which is why his Third Eye got opened at the end.

But it seemed like Doctor Strange of Earth 616 might have withstood Darkhold’s corruption as he didn’t use that for long, and it also seemed like he might have mastered the dark magic associated with the third eye.

Just like Sinister Strange, Doctor Strange also got cursed by the souls of the damned while he tried to save America Chavez. When Sinister Strange died, we saw the Third eye on him still open even after his death in the film. This represents the damned souls in him, which is still present.

Maybe in Earth 616, Doctor Strange’s case, he might have been cursed with a few souls of the damned when he tried to dream walk by Sinister Strange’s dead body, but he somehow managed to make peace with them and mastered the dark magic which could be used for good.

But Marvel still needs to provide more Explanation to the Third eye soon, and we will keep an eye on that accordingly. But what do you think which theory will hold? Is it the first one or the second one? Let us know in the comments below.