Boruto Episode 248 ended on a sad note. Heibiichigo, one of the seven Ninja Swordsmen of the Mist and the wielder of the Nuibari, the Sewing Needle, died in battle.

Members of Team 5, Denki and Iwabe, were also captured by the Funato and might be dead.

The tragic turn of events has brought everyone on edge. While fulfilling Kagura’s wish, one more life was lost.

Heibiichigo was changing and now treated others as her comrades. She did this to help them and avenge Kagura’s death.

Funamushi was finally defeated and died at Buntan’s hands as he was about to kill Boruto. His Jutsu was very powerful, but in the end, he was defeated by everyone’s combined efforts.

But what next? What will happen in the War now?

Araumi Funato has taken charge and will face the Mizukage and his shinobi head-on in an all-out battle.

Will Boruto join the Mist Village in the War? Or will he return to the Leaf Village as his mission is complete?

There are a lot more questions that remain unanswered, and we will discuss some spoilers for the upcoming episode of Boruto.

Drop what you expect to see in the next episode in the comments below, and let’s see what happens Next Time on Boruto: Naruto Next Generations.

Boruto Episode 249 Release Date and Where to Watch Online?

Boruto: Naruto Next Generations Episode 249 is titled “Burgeoning Hatred” and is scheduled to release on Sunday, the 15th of May 2022.

Boruto Episode 249 Spoilers and What to Expect?

Boruto Episode 249 will be interesting to watch as we will get to see some serious development. The fire of hatred will engulf everyone within it and destroy everything.

Will Boruto be able to suppress his emotions and do the right thing?

After Boruto and Kagura’s fight with Seirin, she was badly injured and has not gained consciousness yet.

Funamushi, his most loyal man, wanted to avenge her, and his hatred towards Kagura and Boruto led to so many people losing their lives.

Kagura, Heibiichigo, Denki, Iwabe, and more than half of Funato’s elite squad lost their lives in this cycle of hatred.

Boruto is still not satisfied with his revenge and will definitely join the Hidden Mist Village in their battle against the Funato.

Araumi Funato will now lead the battle, and things are going to get very violent soon. Iguro Funato, Araumi’s son, might take some measures to redeem himself and cause more trouble.

He will definitely come after Boruto for foiling his plans.

Boruto might have to fight Iguro next and many others. The Funato clan members are going to avenge the death of two of their leaders, Tenma and Seirin.

On the other hand, a new member of Funato might join the battle.

Watch the upcoming episode this coming Sunday and share your thoughts here on what might happen Next Time on Boruto: Naruto Next Generations Episode 249.

Boruto Episode 248 was full of different emotions. The battles were fierce, but the tragic deaths of Heibiichigo, Denki, and Iwabe can fill everyone’s eyes with tears.

Let’s go through the complete episode in detail.

The episode begins with children returning to the village and informing Boruto and the others that Denki and Iwabe were taken hostage by the Funato.

Both of them helped the children to escape but were caught by Funato.

Metal, who is shocked to hear this, feels sad and is worried about his teammates. But, he cannot allow the village to be endangered and left at the attack of Funato.

He decides to protect it and hopes that Denki and Iwabe are still alive and that they return safely.

Members of Funato surround the village but are not attacking. They are waiting for something and wait there for one complete day.

They attack the village the next morning with full force.

Heibiichigo and Metal take on the right flank while Buntan and Kyoho take charge of the left flank of attacking Funato warriors.

Team 7, consisting of Sarada, Mitsuki, Boruto, and Kawaki, would take care of the rest of the warriors who pass the others.

Boruto and Kawaki are committed to fighting Funamushi as he will come after Boruto to take his revenge.

Though reduced in number, the Funato warriors are very strong and still surpass the others by more than double their numbers.

They overwhelm them, but still, our shinobi are putting up a tough fight and watching each other’s backs.

Finally, Funamushi shows up on the battlefield and attacks Boruto. He has asked his men to bring barrels of water, using which he performed his water-style jutsu to attack Boruto and Kawaki.

But, this time, Boruto had a solution for his water style. He countered Funamushi’s Water Style: Imminent Danger, with his Lightning Style: Thunderclap Arrow.

While using water style and converting the water absorbed by his body into jutsu, he is vulnerable to lightning style, and Boruto took advantage of this.

But, Funamushi is no ordinary warrior. He has entered the battlefield with a plan.

He is a man of the sea and knows a lot about the weather on islands and in the sea. He was sure that it would rain that day and therefore he attacked them this day.

The rain provided him access to a huge quantity of water, and he brought up his most powerful jutsu on his sleeve, the Water Style: Raging Jellyfish.

The water surrounding him took the shape of a huge Jellyfish, and with its numerous tentacles, it destroyed everything in its path.

Even one blow with that is enough to kill anyone. Boruto charged in, and everyone distracted Funamushi with their attacks.

Heibiichigo tied him and the Jellyfish with her chakra threads, but the object was too huge, and she put a lot of her chakra into it.

Metal protected her from other Funato warriors while she held on to Funamushi. But, he was very strong and managed to break free.

He attacked Heibiichigo, and she suffered a fatal blow.

Boruto managed to dodge Funamushi’s attacks and hit him with his Rasengan knocking him down.

But, as soon as he fell and Boruto turned to his comrades, Funamushi took him hostage and was about to slice his throat with a Kunai to avenge Seirin.

Fortunately, Buntan was quick, and she immediately thrust her sword right through Funamushi’s chest, killing him.

Buntan avenged Kagura’s death. The remaining few Funato warriors took Funamushi’s body and left the village. The battle was finally over, and the village was safe.

Meanwhile, Heibiichigo, who was attacked by Funamushi’s attack, was fatally injured and scummed to her injuries.

Buntan, Kyoho, and Metal were destroyed to see her die.

In her last words, she thanked Metal and others for showing her another possibility of life and letting her be with them.

They buried her below the same tree that Kagura used to practice on in his childhood. Heibiichigo and Kagura would rest beside each other in their afterlife.

But the actual battle is far from over. The hatred towards each other will drive the Funato and shinobi from mist village towards destruction.

What path will Boruto choose? Will he be able to stop it?

How do you think this war will end? How many more sacrifices will be made?

Who will win this War? Let us know your thoughts in the comments below. 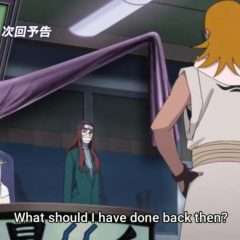