Hold Tight Ending Explained: What Happens to Adam at the End? Did Police arrest Guru ? and What happened to Nat? (Image Credit: Netflix)

Hold Tight Ending Explained: What Happens to Adam at the End? Did Police arrest Guru ? and What happened to Nat?

This is MediaScrolls' own opinion our views are not influenced by another media.

Netflix’s new polish drama series Hold Tight has been on the top chart globally for the reporting week, and it is receiving quite a response from the fans. Based on Harlan Coben’s 2008 novel, ‘Hold Tight,’ the novel was New York Time Best Seller in 2008.

Therefore it has been adapted as a mini-series with six episodes, each with 40 minutes of run time.

Hold Tight is based on the story of a mother, Anna Barczyk, who learns that her 18-year-old boy Adam has gone missing mysteriously after the death of his best friend, Ivor, due to a drug overdose.

After the death of his best friend Ivor, Adam begins to blame himself. Soon, Adam finds himself entangled with the drug racket and decides to run away from his home.

His mother, Anna, tries to investigate what has happened to her son, and soon, they figure out the truth behind Ivor’s death and her son’s involvement in the drug racket.

Hold Tight: What Happened to Ivor and Jasmina?

The Polish series, directed by Bartosz Konopka and Michał Gazda the series begins its premise in the capital city of Polland, Warsaw, where Anna Barczyk (played by Magdalena Boczarska), a doctor, who lives with her husband, Michal Barczyk (played by Leszek Lichota) and their two children Adam (played by Krzysztof Oleksyn) and pre-teen daughter Ola Barczyk played by (Dominika Krzeminska).

The story starts with Adam learning that his best friend Ivor has passed away due to a drug overdose, and since then, Adam begins to blame himself for the death of Ivor. As a result, he ends up distancing himself from his parents.

Anna worries about her son, and so she thinks of installing a spyware camera on Adam’s phone so that she can be aware of and keep an eye on what is troubling her son.

After looking into the text messages interchanged between Adam and his girlfriend, Kaja Kopinska (played by Agata Labno), she begins to understand that somehow Adam is blaming himself for the death of his best friend.

On the other hand, the story now shifts to a different school, i.e., Adam’s sister’s school, where a girl named Jasmina is bullied after her teacher Tadeusz makes fun of her facial hair in front of the whole class.

After this incident, all of Jasmina’s friends now start bullying her, and as a result, she stops going to school. In addition, Jasmina’s father, Janusz, is divorced from Marianna (Jasmina’s mother), and hence he also worries about what would happen to his daughter now.

Jasmina’s father, Janusz, spoke to the teacher who had made fun of her daughter in front of the whole class and warned the teacher not to do that again the next time.

Then we see a memorial service being arranged for the passing of Ivor Hall, where Ivor’s mother, Beata, became emotional and accused Adam of not being with his best friend when required.

Beata also blamed Adam for Ivor’s death as she found a hoodie in a picture taken just a few hours before Ivor’s death. She deduced that the hoodie belonged to Adam, and he was also present with Ivor at that time.

But Adam didn’t agree with all this and denied all the accusations made by Beata. However, he became nervous, especially hearing about the part of him being with Ivor at the time of his death.

Later on, at the party of his friend Grzegorz ‘Gajos’ Gajewicz, he argued with him and soon disappeared. It seemed Gajos and Adam were both involved with Ivor’s death.

Adam’s mother became seriously worried about her son. So, she also goes to a private party of Gajos but can’t trace where her son is.

Later on, on the other hand, we also see Jasmina’s mother, Mariana, getting abducted by Nat, an assassin. Later on, she gets killed, and her dead body is found in a dumpster.

This now leads to a police investigation where CBSP gets involved, and they now try to find the information related to Mariana’s death and how it connects to the death of Ivor and the drug racket.

Anna’s private investigation leads to many secrets being revealed, starting from the involvement of Adam in the drug racket case to the influence of other characters such as Guru, Baloz, and Gajos involvement in the death of Ivor.

Hold Tight Ending Explained: What happens to Adam? Who is Guru? What Happened to Guru at the end?

Towards the end of Hold Tight, we learn about a new character named Guru, who was responsible for the death of Ivor. He was arrested at the end of the series.

Adam’s mother, Anna, learns about Guru through one of the messages she noticed through the installed spyware on Adam’s mobile.

It is revealed that Adam is holding Guru responsible for the death of his best friend, Ivor.

Therefore as Adam’s mother tries to find out more secrets about the character of Guru and she ends up meeting a youth counsellor named Joanne.

Joanne revealed that Adam and Ivor used to come to her for counselling, and he had earlier reported to her why he wanted to run away from his home. He also knew about his mother spying on him.

After this, Adam also sent another text message on his phone to his girlfriend Kaja and told her to inform his mother and father that he would be away for some time and would be back soon.

Later on, we learn that Guru was no one but the counsellor Joanne, and Adam, Baloz, Ivor, and Gajos used to work for Guru. Joanne had opened a secret drug racket by which she used to sell prescription drugs.

Then we see that Baloz and Gajos have kidnapped Adam, and they want the e-prescription codes because, without them, Guru’s operation will be closed. Adam didn’t give anything to them and intelligently had tricked them run away from there.

Later on, during the final confrontation, we see Joanna, aka Guru coming face to face with Adam. Joanne tells him to provide the e-prescription codes, but Adam still doesn’t agree to do so, and he blames Joanna for all this mess. Joanne now takes her gun out and threatens to shoot Adam, but the police arrive and arrest her in time.

Then in the testimony, we see Adam putting all the blame on his best friend Ivor and Guru for stealing the prescription pad and the e-prescription codes and saying they were the ones responsible for the drug racket.

At the end of the series, Anna figured out that the testimony Adam had given was all fabricated and Adam was the one who had stolen her prescription pad and the e-prescription codes, which he then handed over to Guru, aka Joanne, in return that Joanne would provide them with drugs.

Also, she assumed that Adam, Ivor, Baloz, and Gajos were all together when Ivor died of the overdose. But she decided to protect her son and didn’t reveal anything to the police.

Hold Tight Ending Explained: Is Nat dead or alive? and Who killed Nat?

Nat is dead. At Hold Tight’s end, we see Nat getting killed by Jasmina.

In parallel to the story of Adam, Ivor and the drug scandal, Hold Tight also disclosed the story of Nat, who was an ex-army and a psychopath who currently suffers from PTSD.

Earlier, he had served in Afghanistan, and it seemed the war in Afghanistan had impacted his mental health. The Hold Tight series tells two stories. One related to Guru and his drug scandal, and the other was related to Nat and Tadeusz.

When Jasmina was bullied by her teacher Tadeusz in front of the whole class, she was made fun of for her facial hair in front of the entire class. This resulted in Jasmina going into depression and not going to school.

When Jasmina’s mother, Marianna, comes to know about her daughter’s situation, she decides to take revenge on Tadeusz and uses the opportunity to seduce Tadeusz and record the sex tape.

Later on, she used that sex tape to threaten Tadeusz through an unknown number that she would share the video with his wife.

Therefore Tadeusz had no other option but to reach out to his friend Nat to find out who was responsible for threatening him. Nat and Tadeusz had served together in Afghanistan, so he agreed to help him.

But Tadeusz wasn’t aware of what grave mistake he was making as Nat had PTSD. So after finding Marianna was responsible for sending those recorded tapes, he interrogated her and ended up killing her.

Later on, he also interrogated Marianna’s best friend Renata about the secret tapes and who was sending those, and where is it hidden.

When Renata wasn’t able to say anything, Nat killed her. This led to a police investigation of both the murders.

Tadeusz tried to Nat to stop killing, but the Psychopath didn’t stop. He then went on to meet Jasmina’s father, Janusz, and told him to disclose who was sending these videos and where are tapes hidden. Janusz couldn’t answer anything. Therefore, Nat decided to kill him as well, but Jasmina arrived, took the gun from the cabinet, and killed Nat.

Later on, when police summoned Tadeusz after the death of Nat in the interrogation, it is revealed that Tadeusz was not responsible for any of the death. Tadeusz further revealed he wasn’t aware who was sending all these videotapes after the death of Marianna.

We think it may have been Jasmina for sending the tapes to and threatening Tadeusz. Jasmina had a troubled childhood, especially after her parents divorced at an early age. In addition, she was bullied in her school. So it had an effect on her which resulted in her doing all these, such as sending all the tapes to Tadeusz to take revenge on him for humiliating her.

But, towards the end, as she had saved her father Janusz’s life by pulling the trigger on time, Jasmina wasn’t held responsible for any of this, and the police didn’t press charges against her.

That marks the end of Hold Tight. The film is available on Netflix for streaming. For more such exciting articles, stay tuned to MediaScrolls. 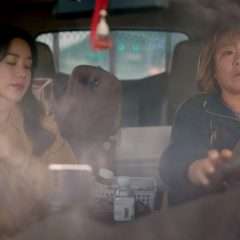 Our Blues Episode 12 recap and ending explained: “Mi-ran and Eun-hui 1”