Yuta Okkotsu, might become the strongest character in Jujutsu Kaisen.

Jujutsu Kaisen 0 Release Date, Spoilers and What to Expect?

The unique storyline of the King of Demons being inside the body of our main protagonist, Itadori Yuji, and the powerful Jujutsu Sorcerers makes it more interesting.

The strongest character in the entire series till now, Gojo Satoru is one of the most loved side characters in the entire anime community. His incredible powers and childish behaviour makes the show more fun to watch.

Not only that, various Jujutsu Sorcerers learn to nullify cursed spirits in Tokyo’s Jujutsu High. Each one has a unique ability, skill, and technique which makes Jujutsu Kaisen worth watching. The backstory of all the characters is fascinating as well.

Jujutsu Kaisen 0 will introduce us to one such character who had not been shown in the series yet. So without wasting any more time, let’s dive into the story plot of Jujutsu Kaisen 0 The Movie.

Who are the Top 10 Strongest characters from Jujutsu Kaisen?

Jujutsu Kaisen 0 Release Date and Where to Watch Online?

Jujutsu Kaisen 0: The Movie will be released on 18th March 2022. The movie will be available in various Cinema Theaters and Crunchyroll.

If you are a Jujutsu Kaisen Fan and want to watch the movie on the first day itself, get a subscription to Crunchyroll and watch hundreds of other anime on it along with Jujutsu Kaisen 0: The Movie.

We will also bring the complete story of the movie after its release, so don’t worry. Leave your thoughts in the comments below for what you expect from Jujutsu Kaisen 0: the movie? Grab on some amazing spoilers below and check out how many of your wishes might come true!

Jujutsu Kaisen 0: The Movie Spoilers and What to Expect?

Jujutsu Kaisen 0 will introduce us to Yuta Okkotsu. He is a cursed child who is being haunted by the spirit of his childhood friend, Rika. Rika died at a young age in an unfortunate car accident.

Rika spirits still linger around Yuta but have transformed into something much worse. She is no longer a cute and innocent girl but a monster who is overprotective of Yuta. Her cursed spirit protects Yuta against his will and has resulted in the death of many people around him.

Yuta was soon apprehended by Jujutsu Sorcerers for mass bloodshed. He is depressed and lonely and wishes to die alone to prevent others from getting hurt by his powers.

But, Gojo Satoru will guide him to a new and better path. Yuta would join the Tokyo Jujutsu High and learn to control his powers so that he does not harm others. He would also make some new friends and learn the art of Jujutsu with them.

By gaining control over his powers and with some help from his friends, he wishes to help others by defeating cursed and evil spirits that haunt others. Let’s see where the road takes him in his journey of life.

Our main protagonist and everyone’s favourite Itadori Yuji, will not make an appearance in the movie! Jujutsu Kaisen 0 is based on the time before Itadori came in contact with cursed spirits and absorbed the King of Curses, Sukana, by eating his fingers.

Seniors of Itadori Yuji and the team at the Jujutsu High, Maki Zenin, Toge Inumaki, and Panda, will be the lead characters in the movie along with all-time favourite Gojo Satoru, Yuta Okkotsu and our main antagonist Suguru Geto.

We might get to see the backstories of Maki Senpai, Inumaki Senpai, and Panda Senpai. In the last season, Jujutsu Kaisen Season 1, we got a glimpse of Panda and Maki’s lives before they joined the Tokyo Jujutsu High.

But, we don’t know much about the cursed speech user, Toge Inumaki. We might get to learn more about him as well. Gojo has also brought Yuta to Jujutsu High, and it will be interesting to watch how he gains control over his cursed spirit Rika.

Jujutsu Kaisen 0 will basically cover the story of previous Jujutsu Sorcerers from Jujutsu High. The trio of Itadori’s seniors will play a major role in the movie. To refresh your memory, let’s go through their skills as well.

What are the various powers of our supporting characters in the movie?

Maki Zenin is a cursed tool user and masters at using weapons with cursed energy. She can wield every type of weapon, be it sword, spear, shaft, etc., with the highest efficiency.

Her mastery of weapons is unmatched. She can also use the highest level special grade curse objects with ease, as was visible in her last fight.

Toge Inumaki is a cursed speech user. He uses cursed energy with his speech which has a deadly impact on the enemy. Even the easiest commands can cause serious injury, and for the same, Inumaki senpai uses a limited vocabulary while interacting with his teammates and friends.

He comes from a clan of cursed speech users and therefore had a hard time during childhood making friends and staying alone. It was only after he met Gojo he was able to realize how even he could live a happy life. He joined Jujutsu High to learn to control his powers.

Also, the more powerful words he uses, the more impact it has on his body. There is also one way to prevent the impact of Curse speech. To prevent getting affected by it, one must cover their ears with curse energy.

Panda is the third member of the trio. He was created from cursed energy by Jujutsu High’s principal, Masamichi Yaga.

He has three different cores, each having a different soul. The three cores signify the three siblings created by Masamichi Yaga and embodied in Panda.

The first core is Panda. It is lively and balanced of all three cores. Panda is not very weak but, at the same time, not so strong either.

The second core of Gorilla is the most powerful, and it can be seen from its previous fight in the last season against Mechamaru. The third core is yet to be revealed and most likely would be revealed in the Jujutsu High 0: the movie.

Who is the main Antagonist in Jujutsu Kaisen 0?

He was once a student at the Jujutsu High, but as we know from Jujutsu High Season 1, he now works hand-in-hand with powerful cursed spirits. In Jujutsu Kaisen 0, we might get to know more about him and his powers as well.

Rika, the cursed spirit who lingers with Yuta Okkotsu, our protagonist in the Jujutsu Kaisen 0, will also play a major role. Her powers will also be interesting to watch, and how her overprotectiveness towards Yuta would lead many unfortunate people to their deaths.

She will also be the main villain in the movie, and Yuta must free his childhood friend Rika from this so that her soul can live in peace. 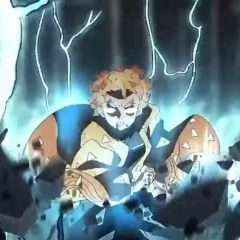