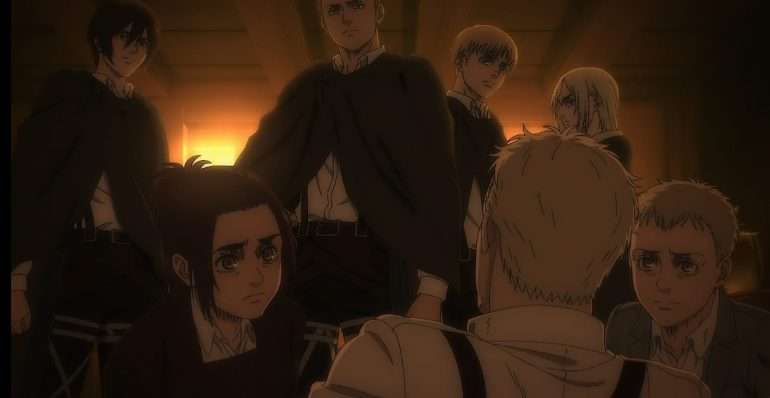 Attack on Titan Season 4 Episode 24 Ending Explained: Did Armin Manage to save Falco from Connie?

The Attack on Titan Season 4 Episode 24, titled “Pride”, has showcased us Armin and Gabi finding the whereabouts of Connie and Falco to save Falco from getting eaten by Connie’s mother, who was turned into an Up-Down Titan by Zeke in season 3.

Plus also, we saw how Levi and Hange managed to survive all this time. A lot has happened in Episode 24. So if you have missed out on episode 24 then do not worry, we got you covered in this article we will explain in detail about all that has happened in Attack on Titan Season 4 Episode 24 “Pride”.

Attack on Titan Season 4 Episode 24 starts by showing how Levi had managed to survive after his devastating blow after his fight with the Beast Titan.

Hange and Levi then meet with Pieck and Theo Magath, and they decide they need to join their forces as they all want Zeke Yeager dead.

Attack on Titan Season 4 Episode 24 Ending Explained: Did Armin Manage to save Falco from Connie?

Yes! Armin did manage to save Falco from Connie. Connie’s initial plan was to take Falco Ragako village, where Zeke had turned his mother into a Titan earlier.

Although Connie was hesitant about whether he should kill Falco and feed him to her mom(Up-Down Titan) so that she could become a normal human being again, at the same time he was also afraid because Falco would turn into the newly inherited Jaw Titan if Connie had used any force against him.

Plus, Connie was also unsure whether he should do this because of his time with Falco so far; he understood that Falco is a good guy, and he trusted Connie completely.

Then, as they reached Ragako village, Falco asked Connie about the Ragako village. Connie is surprised to see Falco knowing the village’s name and asks him how he knew it? Falco replies he heard Connie talking about this in his sleep. Connie says yes, this is the village, and he wants to show him something, and he unwraps the cover that reveals his mother, the Up-Down Titan.

Seeing this Titan, Falco becomes suspicious of Connie and asks why he had bought him here whether he intends to feed him to the Titan? to that, Connie replies No! he does not intend to do that. He wants his help to clean the teeth of the Up-Down Titan.

Armin then offers to sacrifice himself as he wields the Collasal Titan’s powers. If he sacrifices himself, Connie’s mother will be a human being again. Connie seeing Armin sacrificing himself, finally had a change of heart, and he leaves Falco and saves Armin from being eaten by the Titan.

We see Gabi and Falco in tears. Connie and Armin discuss; Connie says how cruel he has become. His mother wanted him to be a good soldier to save innocents, but he tried to kill a child and one of his friends today. Armin also says he could never become the replacement of Commander Erwin.

They finally decide enough is enough; they need to take a stand and have to save the others around the world who are suffering and dying because of Eren and they need to stop this. So finally, Armin and Connie come to terms and decide they should help all those in need and should fight against Yeagerists and Eren Yeager.

Attack on Titan Season 4 Episode 24: What did Mikasa and Historia Discuss?

Mikasa pays a visit to Historia at the medical centre as she believes Historia is the one who has taken her scarf. Historia reveals she had kept the scarf to bring her closer to Mikasa and reveals there is a Thunder Fragment inside her stomach that can’t be taken out, and she will die soon without seeing the free world Eren Yeager is building.

Historia also reveals she had a brief chat with Eren earlier about Mikasa where Eren wanted to throw away Mikasa’s scarf.

Once Mikasa takes her scarf back, and for the last time, Historia says to Mikasa that she does not have any regrets. She became a soldier because of Mikasa, and she is her role model.

Attack on Titan Season 4 Episode 24: Does the Yeagerists Kill Yelena and Onyankopon?

No, the Yeagerists doesn’t manage to kill Yelena and Onyankopon. As the Mikasa, Jean already made a plan with Levi, Hange, Pieck, Theo Magath, Armin, Gabi, Connie, Falco and Annie to save them.

As Floch gave a speech to the Yeagerists and addressed Yelena and Onyankopon as the traitors and says he will set an example by killing both of them in front of the Yeagerists.

But Jean and Mikasa had other plans as they had prepared a perfect escape to save Yelena and Onyankopon first, Jean will give a signal by firing four gunshots, and in the meantime, Pieck on Cart Titan form sneak up from behind and will take Jean, Yelena, Onyankopon on the mouth and run away and will meet with Theo Magath, Levi and Hange.

On the other hand, Mikasa, Armin, Annie, Gabi and Falco will go to meet with Reiner as they will also require his help for the fight against Eren Yeager.

The plan worked as expected, and they managed to save both Yelena and Onyankopon and take them to Levi, Theo Magath and Hange.

When Onyankopon asks when did, Jean had parted ways with Yegerists and joined forces with Marley. Jean says yesterday as he can’t keep his ears shut any longer as the burnt ashes of the dead would never have forgiven him if he had secured a position with the Yeagerists and did nothing against Eren Yeager.

Finally, Mikasa, Armin, Connie, Annie, Gabi, and Falco find Reiner, wake him, and inform him to get ready as they will have to save the world now.

That’s all, for now, stay tuned to MediaScrolls to know the details on Attack on Titan Season 4 Episode 25.