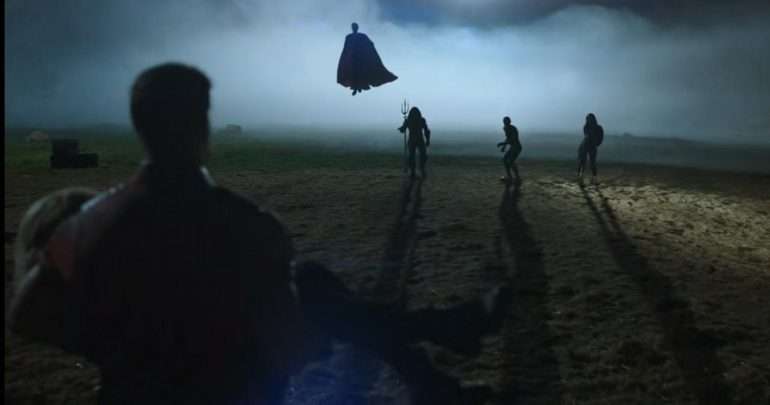 Peacemaker Episode 8 Ending Explained: Is [Spoiler] Dead? and Did Peacemaker and Adebayo Stopped the Butterflies?

Peacemaker Episode 8 was undoubtedly the best so far. And with Episode 8, the series comes to an end for its inaugural season. In Episode 8, we saw the final confrontation between Peacemaker, Vigilante, Harcourt, Adebayo, Economos and Eagly vs The Butterflies.

As anticipated in our previous article, in Episode 8, the gang tried to relocate where the Butterflies have kept the Cow as Butterflies planned to teleport the Cow to a safer location so that they could survive on Earth.

In Peacemaker Episode 8 Ending, a lot has happened. First, Harcourt, Vigilante and Econos got heavily injured fighting the Butterflies. Plus, we got to see a special appearance at the end by the Justice League.

So, If you have missed out on Episode 8, do not worry. You have landed on the right page. In this article, we will explain the complete ending explained of Peacemaker Episode 8.

In Peacemaker Episode 8, we first see that Peacemaker Vigilante is annoyed with Adebayo for trying to stage him by placing the diary at his home.

Adebayo apologised for her mistake, but Peacemaker wasn’t ready to forgive her that easily.

The Peacemaker and the team reached the Barn where the Cow had been kept. Adebayo immediately called Amanda Waller to inform the Justice League about the Alien invasion and immediately sent them for backup.

Unfortunately, Amanda Waller disagreed, and the team now had to find a way to stop the teleporting of The Cow.

The Peacemaker now takes out 5 of his helmet, which would help carry out this mission. The Helmets were as follows: UnderWater World, Scabies for All, Anti Gravity, Sonic Boom, and Human Torpedo.

Adebayo decided to use the Sonic Boom helmet, and as part of their plan, they agreed that Eagly would place the helmet on top of the Barn, and then they would destroy the Barn with the help of the microphone, which will active the helmet.

But Peacemaker’s Pet Eagly had other plans. Eagly didn’t put the helmet on top of the Barn. Instead, Eagly tossed the helmet in the middle of the jungle. The whole scene was hilarious.

Now the team had to find where Eagly might have dropped off the helmet, and here we see Peacemaker started hallucinating about his father.

It looked like after killing his father, The White Dragon, in the last Episode, the Peacemaker wasn’t well. Harcourt saw Christopher’s behaviour and tried to calm Peacemaker down, and they finally found out the Sonic Boom helmet.

The team decides that Economos will go inside the Barn in disguise and act as one of the butterflies. Once he is inside the Barn, he will place the helmet near the Cow so the Adebayo can activate the helmet with her voice command and destroy the Barn and the Cow.

But in Peacemaker, if you have watched the series so far, you would know that things don’t always according to plan.

In this case, their plan failed as Economos glanced at the creature Cow, and he got so scared that he immediately fled from the scene, leaving the helmet openly.

That butterfly then goes outside and informs every butterfly that Economos is an imposter; he just placed this bag inside the Barn.

This was when Adebayo had to activate the Sonic Boom helmet, but the device slipped through her hands. All the Butterflies all together now started attacking Economos.

Still, luckily Adebayo found the device in time, activated it through her voice commands and initiated the first blast inside the Barn. Although the damage caused the teleporting device to fail, it didn’t kill the Cow.

All the Butterflies attacking Economos immediately turned back and rushed inside the Barn. Adebayo again used the sonic boom helmet to trigger two more devastating blows to the Butterflies.

By this time, Economos reached safety, and now Vigilante, Peacemaker and Harcourt take the fight into their own hands; they directly engaged in a battle with the Butterflies.

Harcourt got shot in the neck and back by the butterflies, and Vigilante also got hit on his back.

Seeing all of his friends getting whipped, Adebayo takes the gun and joins the battle to help her friends. At the same Economos, while trying to stop Adebayo, slipped and broke his leg.

Adebayo immediately killed a couple of Butterflies and saved Harcourt from being possessed by a butterfly.

Economos also provided Adebayo with the Human Torpedo helmet, which Peacemaker had told earlier not to use unless there is an emergency.

Did Adebayo and Peacemaker stop the Cow? and Is the Cow dead?

Adebayo went inside the Barn, and she tried to find out where Peacemaker was. On the other hand, Peacemaker and Goff, the butterfly whom Peacemaker had kept as his pet earlier, fought off, and Adebayo, in the meantime, also reached the place where they were fighting.

She activated the human torpedo to launch an attack on Goff, but unfortunately, it backfired, and instead, she directly hit the walls and injured herself.

Goff now tells Peacemaker that she has no intention of hurting him and tells him to follow her. The Peacemaker went inside and finally saw the Cow.

The Goff then tells Peacemaker to help her teleport the Cow away from here; Peacemaker disagreed with her and asked her why should he help her in the first place and Why they are here on Earth and killing innocent people? Is this for powers?

To that, Goff reveals they are not doing this for power; they are doing this because they had taken an oath, their kind travelled here from a planet which has become unlivable. But they found Earth where they found breathable air drinkable water, although the food from Earth couldn’t sustain them, so that was why they bought the Cow.

The Cow would help all the Butterflies survive for another 100 years, but after spending some time on Earth, they realised that, unlike their planet, Earth was also on the same trajectory of destruction.

“That is Ignoring science in favour of populist leaders who tell that floods and fires and the diseases are unrelated to their actions valuating profits over survival, treating minor inconvenience as an assault on people’s freedom, so that is why the Butterflies made a vow to do anything to change the course of action and make the decision for humans so that the Earth can survive.”

Murn disagreed with their efforts, which is why they killed Murn. Goff now tries to manipulate Christopher even more by telling him he is one of them.

By that time, Adebayo finally stood up, and Peacemaker launched an attack with the human torpedo helmet that Adebayo was wearing. It took her directly inside the Cow’s body and with a devastating blow, they managed to kill the Cow.

The Peacemaker then killed the other butterfly and shot the police officer who was possed by Goff. Finally, the Cow was killed, and the Adebayo and Peacemaker successfully managed to stop the teleporting and end the Alien invasion.

After receiving proper treatment, she seemed ok. Later on, in Episode 8, she shared her feelings for Peacemaker. Maybe we might see Christopher and Peacemaker as a couple in the next season.

Did we see The Justice League members at the ending scenes of Episode 8?

Yes! the surprise we all were waiting for actually became true as at the beginning of Episode 8 when Adebayo called her mother Amanda Waller and told her to bring in the Justice League that time only I had assumed that there was a possibility that we would see some members of Justice League arriving at the end of Episode 8.

And that indeed happened when Christopher was taking Harcourt to the hospital. We see the late arrival of Superman, Wonder Woman, Aquaman (Jason Mamoa), The Flash (Ezra Miller).

Although we didn’t see the faces of Wonder Woman(Gal Gadot) and Superman (Henry Cavil), by the look of it, it did look like them.

Christopher first cursed the Justice League and then to Aquaman for arriving late.

The scene was hilarious; even the Flash burst out of laughter.

Is Vigilante Dead or Alive?

Yes, Vigilante survived, although he didn’t want to get treated after reaching the hospital as he was scared that someone would know his identity.

But soon, he dozed off because of the pain, and after that, the doctor treated him, he survived.

Yes! The Peacemaker also forgave Adebayo. They had a discussion in the hospital hall where they discussed the stuff that Goff said to Peacemaker in their confrontation.

If you remember, Goff said the Butterflies had taken the oath to save the humans, which is why they took over the bodies of human beings.

Christopher asks Adebayo whether he had taken the right decision or did he kill the whole world? To this, Adebayo says maybe Christopher has given humanity a chance to take their own decisions instead of some bug overload.

Adebayo also asked Christopher what made him choose not to help them. Was this because of his proto-fascists libertarian idea of freedom?

Finally, Adebayo says sorry to Peacemaker for one last time, and Peacemaker forgives him and says after Eagly she is Christopher’s BFF.

Did Adebayo spill the beans on the secrets of Task Force X and Amanda Waller?

Yes! Adebayo finally went against her mother and revealed all the truth behind Task Force X’s covert operations and Project Butterfly.

Adebayo states Christopher Smith and Vigilante were working on a US Military’s top-secret mission, Project Butterfly.

She also said the truths behind Task Force X, where convicted criminals take dangerous missions for the United States to get some years off from their life sentences.

She also said Amanda Waller takes care of such operations, and she is the one responsible for Project Butterfly. Adebayo tells the Media to investigate the matter thoroughly.

Is Christopher a free man after Peacemaker Season 1 Ending?

Yes! Christopher Smith, aka The Peacemaker, is finally a free man after all the struggle in season 1. It looks like he has made friends with Goff, and he feeds the last bit of nectar left on the Jar. Also, Eagly seems happy with Peacemaker around him all time.

As Christopher takes a sip of his beer to chill out, he starts hallucinating about his father again. His father, Auggie, now sits right beside him. This implies that whatever Christopher does, he will not get over the fact that he has killed his father.

That also means in Peacemaker Season 2. We will see Christopher Smith still struggling with the whole White Dragon situation. Although with Adebayo, Vigilante and Harcourt around, he will get over it soon. Stay tuned to MediaScrolls to find details on Peacemaker Season 2.