The Wasteland Ending Explained and Review: Does the Beast Exist? Or is it just a Hallucination?

The Wasteland is a Spanish horror-drama film. Directed by David Casademunt, the film is about Diego, a young boy who stays with his mother in a place that is isolated from the entire world.

Diego always has a sense of fear in him. There is a demon that stalks and creeps around their house. He tries to overcome this fear by protecting himself and his mother from this demon.

The viewers are sure to get a ride of the paranoia that Diego faces in the film. If you are interested to know about the movie in detail, continue reading this article.

The Wasteland Plot: What is it About?

The movie is set in Spain, and the timeline showcased dates back to the 19th century. The country has gone through many wars by this time. The families have somehow managed to settle in some isolated pastures of land.

The Wasteland focuses on one particular family among the many living in such a manner. We see only three members in this family- Diego, a young boy, Lucia, his mother, whom he calls Mama, and Salvadore, his father.

Salvadore tries his best to make his son courageous, but his Mama always makes sure that the innocence in Diego remains. One day Salvadore tells Diego the story of the Beast. His sister, Juana, could see the Beast, who used to feast on the fears and pain of the people. After seeing the Beast, Juana dies.

We see that Salvadore finds a wounded man in the creek outside his house. He brings the man into his home and takes care of him. Once this man gets healthy, he does something which no one expected. He tries to attack Mama and Diego. Salvadore stepped into the scene and shot him with a shotgun.

The family thinks that the man’s dead body should be returned to his family. Salvadore then carries the body and goes outside the safe area towards the warzone to look for the man’s family.

Time keeps on passing, and days go on to months, but Salvadore does not get back home. Mama feels that her husband might not return anymore, and she gets completely depressed. Diego makes the best of his efforts to cheer up his Mama, but nothing of that sort happens.

One day we see that Mama sees a dark figure lurking around. This figure looked very much like the Beast Salvadore mentioned in his stories. The Beast seems to move towards their house with every passing day. So both now try to hide in the house from the Beast.

Mama makes numerous attempts to kill the Beast. However, she fails every time, and ultimately she ends trying. Finally, the Beast reaches their doorstep. Mama throws out his son from the house, knowing that the Beast had come for her.

In The Wasteland Ending, we will finally get to see Diego facing all his fears and doing something that will save his mother from the hands of this Beast.

The Wasteland Ending: What happens to Mama and the Beast?

In The Wasteland ending, we see that Diego is thrown out of the house by his mother, and she tries to sacrifice herself so that Diego can be saved.

When the Beast comes to strike his mother again, Diego shows courage and stands in front of the Beast and yells at it. We understand that he is no longer afraid of the Beast. He takes the gun and empties the remaining bullet on the Beast.

This gives him time to take his Mama out of the house and then put the whole place on fire, ultimately killing the Beast.

Diego takes a cart and pushes his mother away from their burning house. Being severely wounded, we see that Mama passes away at the end. In the last moments of her life, Mama insisted Diego carry on with his life.

Diego closes his eyes to recall all the joyous moments he had shared with his mother. However, behind him, the Beast can be seen emerging from the fire, meaning that it has not died till now.

The Beast will not be feasting on him now that Diego is no longer afraid of it. This brings the film to its conclusion.

The Wasteland Ending Explained: Does the Beast exists in real? or is it just in their mind?

In The Wasteland, the story of the Beast starts with Juana. Her parents physically abused Juana. This went on to take a mental toll on her, which made her hallucinate, and she ended up creating the Beast in her mind.

The Beast was built from her paranoia and the stress she had in her mind. Juana was the only one who could see this Beast. She had died by falling from a window. If we look closely at all of this, we will realize that Juana actually committed suicide.

The Beast is thus a creation of one’s own psyche. It is not a real thing. The Beast had come into Mama’s life because she had the fear in her that she had lost her husband. Salvadore had not returned home for long, which meant that he was dead.

This paranoia grew in her caused a mental illness. This illness led to the formation of the Beast in her mind. As we reach The Wasteland ending, we see that she gets wholly depressed and develops suicidal tendencies. She even attempts to hang herself, but Diego stops her.

When Diego enters the house by breaking the door, we see that Mama is lying with a lot of wounds. These wounds have all been self-inflicted.

Diego was a child who had very limited human interaction. He used to play with his rabbits. In the movie, they had to eat the rabbits for their survival. He had heard the story of the Beast from Salvadore, and he also saw his mother’s growing paranoia. This could have created a toll on the boy’s mind as well.

In The Wasteland ending, we saw the Beast again emerging from the burning house. The creature appears just from Diego’s perspective.

We can understand by the end of the film that the Beast had been created because of the psyche of Mama and Diego. The Wasteland Review: Our take on the film
The Wasteland film is worth watching as in the movie; you will constantly feel something about to happen. If you are interested in watching content filled with psychic elements and horror, this could be a good pick for you. The film presents its characters' existence as very rigid and determined. We see Mama losing her grip on the reality of things, and she is stuck in constant paranoia of having lost her husband; in these moments, we feel bad for Diego and his Mama. So there is an emotional touch in between, which blends perfectly with the horror and psychic elements, ultimately making it a good horror thriller to stream. The middle part would seem to be saggy, and there is a lot of darkness in the film, and if you are fond of such content, you will be pleased to stream The Wasteland. If we had to rate it, we would probably give it a 75/100.
75 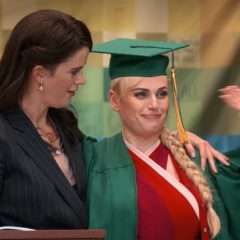