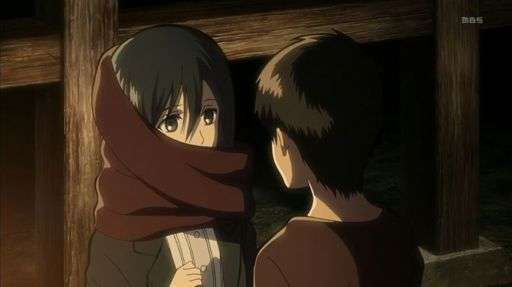 Why did Mikasa kill Eren in Attack on Titan?

Mikasa Ackerman is one of the most popular characters in the anime series Attack on Titan.

She is known for being a strong and skilled fighter and for her close relationship with Eren Yeager. So it came as a shock to many fans when she killed Eren at the end of Attack On Titan.

Some have speculated that she did it out of love, while others believe that she had no other choice. But what is the real reason Mikasa killed Eren? Let’s take a closer look.

The “Attack on Titan” anime’s ending turned out to be quite a hot topic for discussion, and numerous theories started to surface.

At the same time, a large number of hardcore anime fans have emerged, and they are even making pins and stickers of characters like Alan and Mikasa for their collections or sale.

As a fan leader, why don’t you now start making a custom enamel pin for your favourite anime characters?

What Led to Eren’s downfall?

First, to understand why Mikasa decided to kill Eren, we would have to break down everything from Eren’s downfall to Ymir’s struggle with Karl Fritz.

Towards the end chapter of Attack on Titan, we saw the change in Eren’s behaviour, and it became evident that he had some other motives that formed a barrier between him and his friends in the survey corps.

After that, his friends didn’t find where he was as it turned out that he was with his brother Zeke upon Yelena’s encouragement. Yelena is an anti-Marleyan soldier/volunteer who was working under Zeke.

To make things even worse, Eren’s intention of attacking the enemy was precisely the opposite of what Hange had planned. He wanted to attack the enemy from within, which Reiner did years ago.

After which, Eren declared war on Liberio in his own way. Mikasa tried her best to remind Eren that what he was doing was wrong; he had killed young children, even women, to get his revenge, but by that time, we were already sure that Eren was not in his right mind.

From there on, he goes utterly rogue on his own; after reaching Paradis, he is locked where he refuses to share his motives and what he plans to do next; after that, he breaks out from jail and creates a rebel group known as The Yeagerists.

The Yeagerists group was responsible for constructing a rebellion among the people against the Survey Corps and the military, which resulted in a civil war.

After which, we saw Eren for one last time after he had gone entirely rogue; this time, he had one final discussion with his friends Mikasa and Armin.

Here he accused both of his friends of being mere slaves and even insulted Mikasa for being an Ackerman and told her that he hated her from the beginning when Armin tried to attack Eren here, but Eren had beaten him badly. (but this was all part of the plan, which we will understand at the end).

Why did Mikasa kill Eren? And why it was crucial in Attack on Titan?

Fast-forwarding to the last bit of the Attack on Titan story, with Rumbling in tow, Eren, by this time had killed 80 per cent of the total world’s population.

Therefore now Survey Corps, Marley, and Eldian soldiers had no other option to kill him; with Levi being injured and Mikasa being the strongest of them all, she decided that she would free the world from Eren’s suffering by killing him.

So in order to stop the rumbling, Mikasa had no other option but to kill Eren, which was a tragic ending to their love story.

We had known Eren wouldn’t have left Mikasa with his hateful last words, which is why next, we saw a “dream sequence” on Mikasa’s brain telling her to forget about him and live a happy life when everything is over.

Why was Mikasa the only one who could end the war?

If you have read till here so now comes the main reason why Eren went full rouge and said terrible things to Mikasa.

So the reason behind that, as revealed in Chapter 139 of Attack on Titan, Ymir was too waiting to get freed, and her situation as she was trapped due to her complicated relationship with Karl Fritz.

Ymir’s story finally unravelled in front of us in this chapter. She, too, was waiting to be freed.

However, her situation was that she got trapped due to her complex relationship with Karl Fritz.

So it was not hatred for which she chose Eren to start the rumbling. It was because her love burdened her, and love has always been a big yet invisible theme in the Attack on Titan; in the end, this revelation bought a beautiful ending to Hajime Isayama’s story.

According to Eren Ymir, she had fallen in love with Karl Fritz, and it was the reason she had developed Stockholm Syndrome after Fritz took her as his wife and exploited her powers. (via Animehunch)

Ymir was also another woman burdened by the love, and she was unable to put her feelings aside, which bought the fall her.

Ymir’s love for Karl Fritz kept him on the shackle even 2000 years after her death, and Mikasa also went on a similar path as her.

In the Attack on Titan Chapter 139, it was revealed that Ymir had pinned all her hopes on Mikasa so that she could choose the world over her love which would set Ymir free.

As a Founding Titan, Ymir could have easily broken free from the shackles of Karl, but her love for Karl had made her hindered.

Although Karl just used her to abuse her powers to bring harm, Ymir could not stop her because she wasn’t strong enough to break free.

That resulted in her being a mere weapon to King even after his death; she served him and his bloodline.

Mikasa might’ve not suffered the same as Ymir with Eren, but her love still blinded her. Even after Eren screamed at her calling her a slave and saying that he hated her stupid obedience, Mikasa’s first intuition was to save Eren from Armin’s punch.

No matter how irrationally Eren has acted in the series, every time, Mikasa went above and beyond to ensure his safety.

This gave Ymir the emotional affirmation which she needed to get free.

After which, the power of Titan came to an end, and all the normal, along with the other Titans, reverted back to their human form.

So why did Eren listen to Ymir? Why was Eren’s sacrifice required?

Yes, it was Eren sacrificing himself to carry out the actions which would result in Mikasa killing him.

As we even mentioned earlier in the article, he said terrible things to Mikasa to make Mikasa hate him.

In reality, Eren also loved Mikasa, but he had to be the bad guy so that all this could end and he could break everyone from Ymir’s shackle.

In the finale of Attack on Titan Chapter 139, Eren confessed his true feelings for Mikasa; he said this to Armin:

“I don’t wanna die; I want to be with Mikasa… With everyone. I want her only to think about me no-on else. Even after I die, I want to be on her mind for some time, at least ten years. I really want her to be happy.