In the latest episode, we saw that Inosuke had almost found the demon lurking in the Ogimoto House.

The demon had intercepted Makio’s letters to Tengen and had kidnapped her. Inosuke detected the presence of the Demon and tried to attack it.

But unfortunately, the demon was too fast, even for Inosuke. It escaped along with Makio. Is Makio in danger? The demon was interrogating her about the letters.

She will never reveal that she was informing Tengen about the happenings of Ogimoto House but will the Demon kill her like all other humans?

On the other hand, Zenitsu came across the Upper Demon Moon Six. The demon moon disguised as an Oiran punched Zenitsu, knocking him unconscious. But this act has proven to her that Zenitsu is a member of the Demon Slayer Corps.

Is Zenitsu in danger? Will he be able to fight against an Upper Demon Moon? Will Zenitsu be kidnapped as well? What do you think will happen to Zenitsu? Are the demons in Ogimoto House and Kyosuke House the same?

Tanjiro has also detected the presence of a Demon in Tokito House as well. How many strong demons are present in the Yoshiwara Entertainment District? Is there more than one Upper Demon Moon involved?

How strong these demons must be that even Tanjiro, Inosuke, and Zenitsu cannot detect their presence even after coming close to the demon. Inosuke lost the demon, and Zenitsu could not notice it right until it came before his eyes.

Demon Slayer Entertainment District Arc Episode 4 is scheduled to release on Sunday, the 26th of December 2021.

All the episodes of Demon Slayer: Kimetsu No Yaiba can be streamed online on platforms including Crunchyroll, Funimation, Hulu, Bilibili, AnimeLab, etc.

The episodes are available in various subbed languages like English, Russian, Italian, Portuguese, etc. The dubbed versions might be released soon as well.

Makio, Tengen’s wife, who was secretly inspecting the Ogimoto House, had already been kidnapped and was being interrogated to reveal the details of the person she was working with and sending the letters.

Now, the Upper Demon Moon Six already knows that Zenitsu is a member of the Demon Slayer Corps and thus will attack him when he is all alone.

Will Zenitsu be killed? Is his life in danger? Is there any way for Zenitsu to battle the Upper Demon Moon and escape alive?

We cannot say what will happen when Zenistu encounters the Upper Demon Moon. To find the answer to this, you must watch the Demon Slayer Entertainment District Arc Episode 4.

On the other hand, the Upper Demon Moon might also identify Inosuke as a demon slayer because he was the only one to sense him. He chases after it but loses it. The demon also took Makio with it.

The demon was so strong that even Inosuke, who has instincts almost as strong as animals, could not sense him. Even when Inosuke searched for him with full concentration, it was no use since the demon had already escaped.

If the demon has identified Inosuke as the one who chased him, he might also be in danger. Still, Inosuke stands a better chance at finding the demon than the others with his sharp instincts.

We can expect Inosuke to finally cross paths with the Demon in Ogimoto House in the upcoming episode.

Two days ago at the Kyogoku House, the lady of the house had identified that an Oiran named Warabihime was not an ordinary female but a demon.

She had heard the stories of such beautiful ladies from her grandmother. When she encountered her for the same, she had to pay the price with her life.

Tanjiro is safe as he has not come across the Demon yet, but if a fight breaks with the demons, he will be the first to rush to his comrades. He will join Zenitsu to fight the Upper Demon Moon Six.

We can also expect to see the legendary Sound Hashira, Tengen Uzui, in action. The battle will surely be incredible, but the outcome is what really matters here as the lives of innocent people like Uzui’s wives and others are at stake.

Will Tanjiro and his friends be able to find and save Tengen’s wives? Can they stop the demon? Let us know in the comments below what you think might happen in the Demon Slayer Entertainment District Arc Episode 4. Watch the episode this coming Sunday to find out.

Demon Slayer Entertainment District Arc Episode 3 Recap, Who are you?

Demon Slayer Entertainment District Arc Episode 3 was one of the best episodes in Demon Slayer to date. With so much excitement, it is hard to sit still. Unlike Episode 2, which was hilarious, Episode 3 was amusing with the Upper Demon Moons in action.

The episode begins with Makio, Uzui’s wife, who was investigating the Ogimoto House of Yoshiwara Entertainment District, being interrogated by a demon regarding the letters being sent by her.

Inosuke, who was investigating the same house, heard from others that Makio was sick and therefore not coming out of her room. He smelled something fishy and decided to check up on her.

When he reached her room, he found the food left by others on the door. Makio had not even taken the food in her room. So instead of thinking more about it, Inosuke decided to check it for himself and opened the door.

To his surprise, he found the room empty and in shambles. Everything in the room was destroyed as if cut by very sharp blades. Just a few moments ago, Makio was also in the room tied up by the Demon.

Inosuke sensed the presence of a demon in the attic and threw a bowl at it. The demon tried to escape with Makio, and Inosuke chased after it.

But in the end, Inosuke lost the demon who was travelling through the walls. Later on, when he tried to sense it again, it was still no use as the demon had already escaped and taken Makio with it.

At the Kyogoku House, two days ago, the lady of the house was found dead. She had fallen from a height (probably a window) and was dead. Zenitsu had not been able to find anything on her or hear anything regarding Hinatusre, Uzui’s wife.

He heard the crying of a small girl, and when he reached the scene, he found her crying in a room that was utterly destroyed. Just when he was about to console her, he heard a voice from behind demanding his identity.

Zenitsu never heard the person standing right beside him until they spoke to him. It is surprising because Zenitsu has super hearing ability and thus can detect demons just by their sound. He understood that it was a demon and that too an Upper Rank.

The ground slid from his feet as he came face to face against the Upper Demon Moon disguised as an Oiran.

The demon disguised as Oiran had threatened the small girl to clean that room and, when she had not done so, was about to punish her. She lifted the girl by her ear from the ground, and blood oozed out of her ear.

Zenitsu couldn’t take this any longer and firmly gripped her hand. He asked the Oiran to leave her alone. Zenitsu himself was terrified of the Upper Demon Moon but still tried to save the girl at the cost of his own life.

The demon punched Zenitsu with such tremendous force that even after he was defending himself, he blasted through the walls of two other rooms and was knocked unconscious.

The demon now understood that Zenitsu was not any average human but a demon slayer.

When the man of the house arrived at the scene and begged the Oiran to forgive Zenko (Zenitsu), she left. Now Zenitsu might be in danger.

Also, two days ago in the Kyosuke House, the lady of the house confronted an Oiran named Warabihime for causing trouble to others and hurting them, causing them to commit Ashinuke and suicide.

After seeing Warabihime’s reaction, she remembered something from her past and said that from past times there have always been some incredibly beautiful Oirans who were very twisted in nature.

Such Oirans existed in every time and were fond of assuming names ending with ‘Hime’, and if anything was to irritate them, they would cock their heads to the sides and glare at you from below. That was a unique habit that they shared.

After seeing the same reaction, she was terrified by what she had just realized. She asked in horror, “Who are you? Could it be th-that you ar-are not human! “

The next moment she found herself in the air, high above the roof of the house, being held by the Oiran now in her demon form. It was the Upper Demon Moon Six.

She told the lady that she should not have spoken this even if she had realized it. She then dropped the lady from this height, killing her instantly. Everyone believed that she had either committed suicide or had fallen through a window.

And for those who might suspect the Oiran would never dare to go against her for their own safety.

When the Upper Demon Moon Six returned to her room, she found the Demon King Kibutsuji Muzan there. She bowed to her instantly with admiration and surprise.

Muzan praised her for her beauty and for killing so many humans. She had already killed seven Hashira and killed so many humans that it was hard to keep their count.

Muzan also alerted her that she might encounter more demon slayers. He also added that only a Hashira could identify them in their human forms because no other human is skilled enough to find the Upper Demon Moons or Muzan when they are in human form.

And all this took place just two days before Tengen, Tanjiro, and his friends arrived at the Yoshiwara Entertainment District.

If they had arrived any sooner, they might have crossed paths with the demon king himself, but it cannot be helped. So we will just have to wait a bit longer for the battle with the Demon King Kibutsuji Muzan.

Now, the Upper Demon Moon Six has found that Zenitsu is a demon slayer and thus might attack him. With so many things happening at the same time, it is hard to control excitement.

So watch the Demon Slayer Entertainment District Arc Episode 4 this coming Sunday to see what happens next. 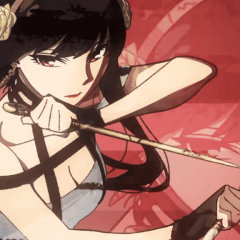