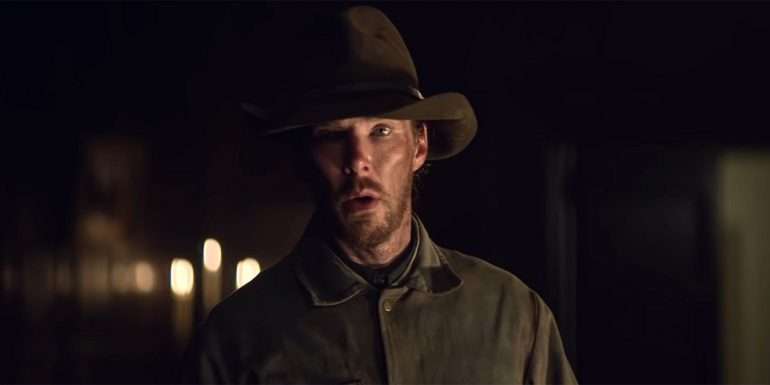 The Power of the Dog Stills (Image Credit Netflix)

The Power of the Dog Ending Explained: What Happens to Phil at the End?

One of the greatest directors of all time, Jane Campion, explores several aspects of masculinity in The Power of the Dog.

These three characters symbolize the three different yet unique aspects of masculinity in the 1920s, the end of the Frontier era.

As the movie continues and by the time we reach The Power of the Dog ending, we notice that the three distinct personalities and differences are no longer there.

Their roles change and shift similarly, as seen in the musical chair game.

George is seen to take a passive role and take a back seat and lets his stepson and his overbearing brother take place up forward.

After George withdraws, we see that Peter and Phil’s relation turns to an unknown battlefield.

Peter wants to save his mother, Rose, from any harm.

On the other hand, Phil is not happy because of the loss he has faced in his relationship with his brother.

The Power of the Dog ending shows the audience that the war comes to an end, with Phil ultimately dying at the end.

If you are interested in knowing more about how Phil dies, continue reading the article to learn more.

What happens to Phil in The Power of the Dog ending?

In The Power of the Dog ending, we see that Phil has reached a point where he is breathing his last breath.

We see Peter’s mother, Rose, requesting the Native Americans to take all the cowhide.

Phil was using this cowhide to make a rope for Peter.

Phil feels that if he is making the rope and mending the bond between him and Peter, it would be almost the same as making amends to his relationship with Bronco Henry before he died.

This was Phil’s way of having his happiness and sense of connection.

We will find some similarities between this film with another film, Call Me By Your Name.

However, both of them are not the same.

Phil then discloses the drinking problems which Rosa is going through.

Peter tells Phil that he has brought some cowhide left with him.

They can make use of that to complete making the rope.

This cowhide was when Peter had taken off from a diseased cow in the earlier parts of the film. Peter does not reveal this information to Phil.

We see Phil dipping his hands in the liquid where the diseased cowhide was kept.

There was a big wound on his hands, and he was not wearing any gives.

His cut got exposed to the diseased water, and he ended up getting sick the next day.

George takes him and rushes to the doctor, but the infection had spread so much in him that he couldn’t make it.

George was told that Phil had died from anthrax.

He was not willing to accept this because he knew that Phil was never for the decision of working with diseased animals.

The Power of the Dog ending scene takes us to Peter’s room with Phil’s rope for him.

He then hears George and Rose coming, so he pushes the rope under his bed.

When Peter looks outside the window, he sees both of them embracing each other. Peter looks at this and smiles.

This represents that Peter might have had even darker intentions and plans to carry out.

The Power of the Dog ending is not a typical western movie ending.

What were Peter’s actual intentions with Phil in The Power of the Dig ending?

The main narration of the movie starts with the voice of Peter.

In narration, we are told that the love that a son has for his mother is the need to protect his mother when it is required.

This is one of the primary thoughts that will play a significant role in The Power of the Dog ending.

Peter is represented as a very vivid and striking personality throughout the film.

As the movie continues, Phil tells Peter about him being homosexual.

Peter had already guessed it when both of them were together making the lasso.

Phil wanted to keep himself like a handsome, tall and grace-filled cowboy.

There are also signs which tell us that he had romantic feelings for Bronco Henry and was in a relationship with him.

He does not mention anything upfront, but his silence confirms everything.

Peter was there right at the spot when Phil had injured his hand.

There was a significant cut, which made Peter carry on with his plan.

We will understand that Peter intends to get rid of Phil throughout the movie.

He considers him a threat to Rosa, their mother, and the new fortune with George.

Peter uses Phil’s homosexuality to ensure that he gets rid of Phil forever.

With this, he keeps his promise of supporting his mother safe, just as he had mentioned in the narration.

Ultimately he ends up becoming the alpha dog, as the title of the film states.

The Power of the Dog Ending Explained: What does the Ending Portray?

By The Power of the Dog ending, we realize that the entire movie deals with the drawbacks of having toxic masculinity and how it can ultimately lead you to a downfall.

Phil holds up his tough persona in front of Peter and Rose.

It is because of this that Peter starts plotting against Phil.

However, as the movie proceeds, we notice that Phil starts going a bit soft on Peter, but he has already made up his mind of getting rid of him.

The film very beautifully explains to the audience the story of a man who was a good person deep down, but he hides all his goodness and softness to hold up the divinity of him being a man.

The characters are pretty complex-minded, and so is the entire narration of the story. Stay tuned with MediaScrolls to know about more such films.