Boruto Episode 223 was truly amazing. The battle between Inojin Yamanaka and Houki Taketori was awesome.

Both of them showed various skills with their Jutsu and special tricks. They came up with insane tricks to outsmart the other.

Houki won the battle in the end, but it was not easy for him.

Inojin had taken control over his mind with his Mind Transfer Jutsu, but Houki turned the tables over him thanks to the special Anbu training.

On the other hand, the mysterious men who had appeared in the village had kidnapped Amado.

Thanks to Himawari and her friends Boruto and Mitsuki came to know about this situation and are pursuing them.

Mitsuki and Boruto followed kidnappers and Amado to a goods transport train, but the Kidnappers were missing from the train.

Have they escaped successfully from the train? Where have they taken Amado? Who could have kidnapped Amado? Is Code from Kara behind this?

Since the final round, Chunnin Exams have already begun, and Boruto and Mitsuki have not returned yet. Will they be disqualified?

Also, they have no way of contacting the village and informing them about Amado’s abduction.

Will they be able to handle the enemy on their own?

Boruto: Naruto Next Generations Episode 224 will bring answers to all these questions with one more amazing battle between Iwabe Yukino and Wasabi Izuno.

Iwabe’s earth style and Wasbi’s cat cloak will be amazing to watch.

To grab the details of the amazing battle between Inojin and Houki and the spoilers of Boruto: Naruto Next Generations Episode 224, make sure to read out till the end.

Boruto: Naruto Next Generations Episode 224: Release Date and Where to Watch Online?

Boruto: Naruto Next Generations Episode 224, titled “The Legend of the Monster Cat,” is scheduled to release on Sunday, the 14th of November 2021.

The Episodes are available on Crunchyroll, Hulu, Bilibili, AnimeLab, etc.

The dubbed versions are also expected to be released soon.

Boruto: Naruto Next Generations Episode 224 Spoilers and What to Expect?

Iwabe is very strong and is older than Boruto and others.

He was held at the academy because of his lack of knowledge in subjects, but he had practiced his Jutsu and skills more during that time and is better at fighting than others.

Wasabi’s Cat Cloak allows her to use high speed and strength. Her quick attacks are difficult to counter.

As the title “The Legend of the Monster Cat” suggests, we might get to see an amazing advancement of her Jutsu.

Wasabi might display another technique that she had mastered. It can be any traditional secret technique of her family.

Not only that, their fight will be exciting to watch.

Who do you think will win this fight? Will Wasabi overpower Iwabe, or does Iwabe has some tricks up his sleeve?

We can check out what happens next in Boruto: Naruto Next Generations Episode 224 on coming Sunday.

Not only that, but episode 224 will also contain more details about Amado’s abduction.

Who could have Kidnapped him? Was it someone from Kara? Is Amado in danger?

Also, Boruto and Mitsuki are chasing after the Kidnappers but guess what? Kidnappers have escaped the moving train along with Amado.

Where and how could they have escaped? Are Amado and his kidnappers still on the train?

The Chunnin Exams have begun, and this final round will determine who can become Chunins, but where are Boruto and Mitsuki?

They are in pursuit of Amado’s kidnappers without any backup. Will they be able to find and save Amado? Or will they also get caught?

Will Boruto and Mitsuki be able to reach for the final exam in time?

Will they be disqualified if they cannot make it in time? Will they get any unexpected help in the way to rescuing Amado?

Shiki, the son of Kazekage of the hidden sand village, Gaara might also be on his way to hidden leaf village to watch the final rounds of Chunnin exams.

After all, he almost won the last chunnin exams if Boruto had not cheated.

What if he meets up with Boruto and Mitsuki and helps them out.

Watching Shiki in action will be amazing, but this is just a theory. Let us know what you think might happen here in the comments below.

Boruto: Naruto Next Generations Episode 223 was amazing as a fight between Inojin and Houki takes place.

Houki showed his skills from being an Anbu and what he learned from Sai, the chief of Anbu himself.

Suddenly Himawari, Boruto’s younger sister, arrives there and informs Boruto about some sketchy people she and her friends came across.

Her friends followed them as a part of their Ninja game.

Himawari, worried about their safety, asks Boruto for help. He had some time before the beginning of Chunnin Exams and thus offered to check it out.

When Boruto and Mitsuki catch up with Himawari’s friends, they find themselves at a train yard, and much to their surprise, they find Amdado and three people there.

They push Amado into a train car and threaten him. They have kidnapped him.

The train sets off, and Mitsuki and Boruto chase after it. They climb the train top to save Amado.

Let’s see what they find out. Who could these people be? Why have they kidnapped Amado, and Where are they taking him?

On the other hand, Chunnin Exams are about, to begin with, one-on-one battles in their final round.

All other participants and others like Kawaki watch the match from stands, whereas the general public gets a chance to watch the battles live as they are broadcast throughout the village.

The battle between Inojin and Houki begins as right in the mark of the whistle, Inojin charges with his Super Beast Scroll technique.

This allows him to create objects out of ink. He is so fast in his attacks that Houki gets no time to react.

Houki turns the tables by using Earth Style: Toujinbo. He changes the battlefield by creating huge rocks all over and forming a maze.

This puts Inojin at a disadvantage as his skills are useless if he cannot see his enemy.

Houki has the ability to recall anything he’s seen once instantly. He runs across the terrain, memorizing it completely.

Super cool, right? We all wish if we had this ability, our academics could have been much easier and better.

Coming back to the fight, he attacks Inojin with Kunai knives from his blind spots.

He has Inojin cornered, and Inojin escapes the situation using Super Beast Scroll as he flies high in the sky above the battlefield, giving himself a complete view.

Houki prepared for this uses his Earth Style: Toujinbo to destroy Inojin’s creation and get him back on the ground, but Inojin won’t be defeated that easily.

He quickly uses his super beast scroll to create a distraction and hides.

Does this mean that Inojin is at a disadvantage? Will he lose to Houki?  Inojin still has one more technique up his sleeve.

But to use this Jutsu, he needs Houki in his direct sight, and to get him in that, and he lays a trap to lure him out.

Inojin leaves marks of his paint and hides there to lure Houki to him.

Houki thinks that he has found Inojin and attacks him from behind, but Inojin was expecting this.

He turns around and immediately uses his Mind Transfer Jutsu on him.

Inojin takes control of his mind and is about to take over his body and make him resign when Houki’s mind explodes into a scary form and thereby forcing Inojin out of it.

Houki is thus the winner and defeats Inojin. He says if he had taken over his body, Inojin would have won right away.

Sai, Shikadai, and Chocho arrive there, and Sai explains that what happened in Houki’s mind was a Jutsu that blocks out mental attacks.

This was taught to ANBU Black Ops because they carry difficult missions in foreign lands, and if they are captured, the enemy might peer into their minds to get information.

Sai had trained Houki and others for this.

It is such a high-level Jutsu that it is difficult to master and can destroy the person’s mind using it.

This itself is enough to explain how strong and Capable the ANBU black ops are.

Houki is a very skilled ANBU and admires Kakashi Hatake, the sixth Hokage who was once a member of ANBU Black Ops and became Hokage.

Although from his looks, one can guess that he tries to imitate Kakashi Hatake.

Jokes apart, the next match is decided to take place between Iwabe Yuino and Wasabi Izuno.

This battle will be amazing to watch with the Monster Cat in action.

Wait till Boruto: Naruto Next Generations Episode 224, releasing this Sunday, to find out.

Let us know in the comments below; who do you think might Win?

Things turned out differently for Boruto and Mitsuki.

When they jumped into the compartment containing Amado and his kidnappers, they found it empty.

Watch out for Boruto: Naruto Next Generations Episode 224 this Sunday to find out.

The Monster Cat and the mystery of Amado’s kidnapping make this episode worth the wait. 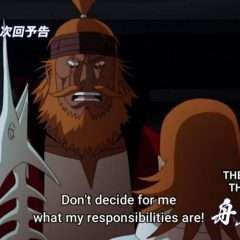