Tom Hank’s Finch Ending Explained, and Review: Does Finch Die in the Movie? Finch is a science fiction drama that follows the eponymous engineer and inventor, who is one of the last surviving humans in the post-apocalyptic world.

Finch, played by Tom Hanks, is the only human for miles around has nobody but his beloved dog and a robot for company. He embarks upon a tremendously difficult journey to find safety for his dog.

Keep reading for more information about the movie.

What is The Plot of Finch?

At the beginning of the movie, we see Finch, wearing a self-made radiation suit, scouring for food around the devastated city of St. Louis with his robot, Dewey.

However, a weather forecast warns him about an upcoming violent sandstorm and forces him to cut his visit short and return to his shelter.

It turns out that he has turned the Tai Space Technology Research Lab, where he used to work as a technology inventor, into his shelter.

Once out of his radiation suit, we see that the protagonist is in pretty bad shape, evidently due to the amount of radiation that he has suffered over the past ten years and is likely to die soon.

After feeding Goodyear, his dog, played by the rescue dog, Seamus, he gets busy with his next invention, a humanoid robot.

He uploads information from countless books in the robot, trying to make it as humane as possible.

However, he gets a warning about a deadly storm that will hit St. Lois within 24 hours, which is to last for at least 40 days.

Due to this, he has to hurriedly finish his remaining work with the robot and immediately leave the facility.

He loads Goodyear and his newly assembled and somewhat clumsy humanoid, Jeff (voiced and performed by Caleb Landry Jones), into a solar power-driven RV and heads westwards to San Francisco, the Golden Gate Bridge to be specific.

During the journey, he keeps training Jeff to take care of Goodyear, as well as the basics of survival in this wilderness.

What Causes The Apocalyptic Events in Finch?

In the movie, we find that a massive solar flare had hit the earth ten years ago and caused the ozone layer to deplete drastically.

Since then, the amount of radiation and the increased temperature of the earth has made its surface unsuitable for all habitation and vegetation.

All electrical systems have also been destroyed.

However, as a silver lining, at the end of the movie, we find that the ozone layer starts to heal itself, showing that there is still some hope left for humankind.

Why is Finch Desperate To Reach The Golden Gate Bridge?

Finch reveals his past to Jeff en route, telling him that his father, who was an engineer in the army and built bridges, had abandoned his mother, even before Finch was born.

On his fifteenth birthday, however, he received a postcard from his father with an image of the Golden Gate Bridge, along with a message that he wished to meet Finch someday.

Finch had always hoped to visit the Golden Gate Bridge and meet his father, but somehow, he never managed to make this trip.

So, when he sees his death approaching, he decides to embark on this journey to make him feel closer to his father.

Why Does Finch Create Jeff?

A brief flashback shows how Finch came across Goodyear. Some time back, he had witnessed a mother-daughter duo being killed by a shooter without him being about to do anything about it.

He was pretty guilt-ridden about it, and when he found Goodyear in the girl’s backpack, he adopted the dog, finding his redemption in doing so. Being aware that his days were numbered, he created Jeff to look after Goodyear.

Finch Ending Explained: Does Finch Die in the Movie?

Finch has tried his best to make Jeff a perfect companion for Goodyear.

As they reach San Francisco, Finch is pleasantly surprised to find that the ozone layer over San Francisco has been healing itself, and the radiation level is much lower.

After a long time, he finds himself exposed to healthy sun says and he also finds fluttering butterflies and growing vegetation. He even wears the white suit he had ordered so that he could wear it to impress his father.

Unfortunately, he does not live long to enjoy all this and breathes his last inside the RV.

Jeff cremates his body and is now capable of human emotion, even grieves over his death.

Jeff finds comfort in Goodyear’s company and drives the RV to the Golden Gate Bridge to fulfill Finch’s last wish.

As Jeff and Goodyear walk on the bridge and look on to the sea, Jeff leaves Finch’s father’s postcard on the bridge. Finch could not make it to the Golden Gate Bridge, but a part of him did.

Finch successfully imbibed human emotions into Jeff, who can stay as a friend and companion for Goodyear as long as it lives.

As expected, the legendary actor Tom Hanks, who carries this movie single-handedly on his shoulders, has given a brilliant performance.

Caleb Landry Jones and Seamus, the dog, have added elements of humor to the otherwise grim story, which reminds us yet again not to take our planet Earth for granted.

Cinematographer, Jo Willems, has brilliantly shot the arid landscape in the movie. Miguel Sapochnik has directed the movie in a sensitive manner.

However, the 115 minutes of the runtime of this movie is a tad too long for a wafer-thin plot like this.

Finch was initially named “BIOS” in its October 2017 announcement.

It was to be released around the theatres in the United States of America by Universal Pictures on October 2, 2020.

However, due to the Covid-19 pandemic situation, it was renamed Finch and was released on November 5, 2021, on Apple TV+. Finch Review: Is it worth the Watch?
Yes! The film is worth the watch. The legendary actor Tom Hanks has carried the movie single-handedly on his shoulders and a brilliant performance. Caleb Landry Jones and Seamus, the dog, have added elements of humor to the otherwise grim story, which reminds us yet again not to take our planet Earth for granted. Cinematographer, Jo Willems, has brilliantly shot the arid landscape in the movie. Miguel Sapochnik has sensitively directed the film. However, the 115 minutes runtime of this movie is a tad too long for a wafer-thin plot like this. If we had to rate, we would give this film a 78/100.
78 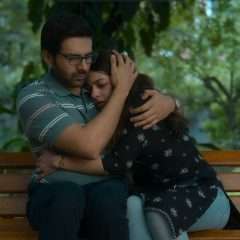