How Does Army of Thieves Explain The Time Loop Theory From Army of the Dead? (Image Credit Netflix)

How Does Army of Thieves Explain The Time Loop Theory From Army of the Dead?

The movie, Army of the Dead, hinted at the concept of a time loop theory, and Army of Thieves, its prequel, throws some more hints.

The prequel, Army of Thieves, is a romantic comedy heist movie, while Army of the Dead is a zombie heist movie.

While Army of Thieves has only the reference of a zombie outbreak in its background, Army of the Dead is full of the blood and gore created by the zombies.

Though the characters are not actually shown time traveling in either of the movies, there are subtle but repeated mentions of visiting another realm by them.

The Extension of Time Loop Theory in Army of Thieves

Army of Thieves begins in Potsdam, a small town in Germany, where Sebastian (real name of Ludwig Dieter) leads a banal and lonely life.

He runs a YouTube channel, the viewership of which is almost nil.

Since his childhood, Dieter has always been passionate about cracking safes and idolizes Hans Wagner, the legendary vault maker.

The introductory scenes actually show the master locksmith designing the vaults, following the untimely deaths of his wife and child.

With an aura of a magical spell, he is shown to build four vaults, each more uncrackable than the previous one.

Then, he makes the fifth vault, which is “capable of containing all his anguish and misery.”

Later, he locks himself in the fifth vault, and when nobody can crack this open, this self-made tomb of his is dropped into the bottom of the ocean.

Sebastian’s obsession with the Hans Wagner vaults leads him to the world of crime.

When Gwendolin wants to hire him in her team to crack three of the four Hans Wagner vaults, he is unable to refuse.

He is not in this for the money, and cracking the vaults of his idol is like a dream come true for him.

The experience of him breaking each one of the vaults for him is like going through countless time loops as he refers to them as “Doorway to another dimension.”

Sebastian’s multiple dreams of being surrounded by zombies in front of a safe could be from his own experience in some other time loop.

In Army of the Dead, viewers find him captured by zombies in front of the Hans Wagner safe, though we don’t see his death.

In another time loop, he might be alive, waiting to be reunited with Gwendolin.

Both the movies provide some questions to the viewers which only a sequel can answer.

In Army of the Dead, Scott Ward, played by Dave Bautista, is hired by the billionaire, Bly Tanaka, played by Hiroyuki Sanada, to execute a heist at his casino in the zombie-infested Las Vegas.

The vault at the basement of the casino, which Scott is supposed to crack, happens to be the legendary Götterdämmerung safe, created by Hans Wagner.

Scott creates his team to carry out this heist and approaches Ludwig Dieter, played by Matthias Schweighōfer, to execute the safe-cracking part of the heist. Here, Dieter describes the Götterdämmerung safe as a doorway to another realm.

When the team reaches the casino’s basement, they find mutilated bodies whose clothes and gear resemble those of the Army of the Dead team.

Wanderohe, played by Omari Hardwich, who holds a master’s degree in philosophy, says to Dieter that these bodies are of their own team which was here in some other timeline.

They are caught in some infinite time loop, fighting and dying again and again.

He adds that Tanaka, who plays the puppet master, is either God or the devil, who keeps repeating the same things.

Director, Zack Snyder, hinted that the team had been there innumerable times, in different time loops, each time getting a bit further. This time, they have made their way to the money.

If one goes by this theory, the team might also be able to make it out alive in some other time loop.

Towards the end of the movie, the United States of America government wipes out the zombie-infested city of Las Vegas by dropping a nuclear warhead.

Vanderohe emerges alive, though somewhat injured, and with the money he has taken from the vault, he hires a private jet to fly him to Mexico City.

Onboard, he feels that something has gone wrong and discovers that he has been bitten by Alpha Zombie, which is when the movie ends.

However, as we never see this happen in the movie, this could also be from another time loop.

In fact, if Army of the Dead is actually a multiple timeline story, one can never be sure if any incident we are watching is from which timeline. 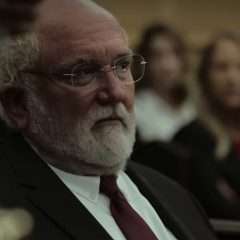 What happened to Donald Cline? Was He sentenced to imprisonment? And Where is Donald Cline now?