With the release of American Rust Episode 9, the finale episode of Season 1, just round the corner, the tension is indeed mounting up.

American Rust Episode 9 Release Date and Where To Watch It?

Besides paid subscription, a 30-day free trial can also be accessed to watch this episode.

For Canadian viewers, American Rust Episode 9 is available on Crave.

This season of American Rust has nine episodes, airing every Sunday.

What To Expect From American Rust Episode 9?

The finale episode of American Rust is sure to end in a cliffhanger, paving the way for an equally exciting Season 2.

American Rust Episode 9 is sure to tie up some of the loose ends left behind in the penultimate episode.

Harris is most likely to catch Bobby in American Rust Episode 9. He might be able to find some redemption for Billy and Isaac by catching Bobby.

Henry might choose to try to take his own life as he hates being a burden on his family. Isaac is likely to return to Buell, a changed man after having faced so much.

In the beginning, viewers find Grace, played by Maura Tierney, giving an inspiring speech to her coworkers the night before voting for the union.

Explaining the benefits of unionizing to her fellow workers, she seems to have grabbed their attention, as well as support.

However, the following day, when the votes are counted, it appears that the previous support of 51% of the staff has dwindled to just 30%.

Evidently, Gelsey has successfully intimidated the workers that they will be left jobless if they support the union.

Nate is the security guard from the mall, and he lets Isaac stay in his apartment as he himself was once a victim of a similar attack.

Isaac connects to Nate instantly as he finds compassion for the first time after being out on the road.

They even sleep together, and Isaac tells him all about his family, including the St. Sebastian necklace that he wears on his neck and is gifted to him by his mother.

However, when he reads about Billy’s arrest, Isaac feels that he has to leave.

As he is left penniless and has even lost his backpack, he takes $200 from Nate’s shoebox and, in return, keeps his St. Sebastian necklace behind. Isaac then leaves without telling Nate.

Meanwhile, cops arrest the dealer who sold drugs to Tom and Trent, but he is handed over to Sheriff Deluca before Harris can interrogate him.

Harris, played by Jeff Daniels, plants a tracking device on Jackson’s car and sets him into his trap by revealing that he has arrested the dealer.

Jackson, as expected, goes on to inform Bobby, which just fits into Harris’ plan.

How does Billy Cope-Up in Prison?

Elsewhere, we get to see Billy’s life in prison.

When Grace comes to see him in prison, she is shocked to see him all injured, but Billy, played by Alex Neustaedter, does not divulge much.

Because of the fight that he has had with an inmate, his popularity has reached the Neo Nazi gang in prison, who call themselves Aryans.

He is approached by their leader and is asked to kill a guard of the prison.

Billy even tries to inform another guard about this conspiracy.

However, it turns out that he is also involved in this. Billy refuses to kill the guard and is kept in solitary confinement for his safety.

Why Does Billy Fire Rachel in American Rust Episode 8?

With the help of the guard who he was supposed to kill, Billy takes down the two Aryans who were after him.

Having been involved in two fights in prison, he is sent to solitary confinement.

He realizes that he will not be able to survive in prison for long.

So, he meets his public defender, Rachel, probably to confess everything in front of her and get out of this mess.

However, seeing Lee with Rachel, Billy is unable to reveal the truth as he realizes the amount of agony this would cause to Lee.

So, he fires Rachel and goes back to his cell.

Towards the end of American Rust Episode 8, we find Grace setting fire to her own trailer.

We can very well understand her frustration after all her efforts went in vain.

After spending almost a lifetime working at Gelsey Dressmakers and even developing physical ailments because of it, she had fought hard to unite her fellow workers to improve the working conditions.

However, when she loses the vote on the union, she feels shattered and feels the futility of playing by the rules.

She torches her trailer, making it seem like the work of some hooligans who had set her car on fire.

She did this to gain sympathy for her and her son, Billy.

She moves in with Harris after this, and they promise to be there for each other. 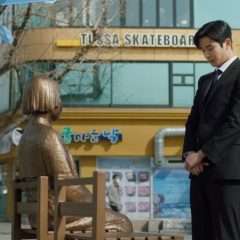