The fifth season of the popular show, Riverdale, on CW, has come to an end.

As expected, Riverdale Season 5 ended in a cliffhanger, and the fans worldwide wait anxiously for the sixth season, all the while worrying about the safety of their beloved Archie and Betty.

A Recap of Riverdale Season 5 Finale

In Riverdale Season 5, the friends plan to build their lives anew.

Veronica, who is now single after having killed her abusive husband, Chad, plans to return to New York.

As Hiram’s propaganda newspaper controlled the news the town received, it was necessary to start an independent newspaper.

Jughead turns Blue and Gold into Riverdale Choice, a new newspaper for the town.

The team’s plan to revive the town of Riverdale meets obstacles as Ghoulie sets Pop’s Cafe to fire.

Luckily, Archie, with fellow firefighters, is able to save Pop’s from going to ashes.

From the evidence, they come to know that Ghoulie has been working under the instructions of Hiram Lodge, who does not want Riverdale back on the map.

The team kidnaps Hiram, and on Veronica’s advice, Hiram is exiled from Riverdale.

They threaten to expose his misdeeds if he does not leave the town forever.

As an act of revenge, Jughead and Tabitha burn down the office of the Lodge as well.

The Curse of Abigail Blossom on Riverdale

When she asks grandma Rose Blossom about it, she reveals a dark family secret to Cheryl.

It turns out that sometime in the 1800s, their ancestor, Abigail Blossom, was accused of being a witch by the ancestors by ancestors of Archie, Jughead, and Betty and was burnt alive by them.

Angry at this disclosure, Cheryl goes to the town hall, where the residents have assembled to elect their government.

Cheryl confronts Archie, Jughead, and Betty and demands an apology.

Meanwhile, Cheryl, after returning from the town hall, unleashes a curse upon Riverdale.

She repeats the final words of Abigail, which takes away the shine and warmth, and strange cold winds descend upon the town.

What Happens To Jughead and Betty in Riverdale Season 5? Do They End Up Together?

As all the fans and readers of the Archie series of comics are aware, Archie has always been Betty’s childhood crush and first love.

However, since Archie has always been awed by Veronica, the glamorous one, anything serious between Archie and Betty seems impossible.

Betty and Jughead get into a beautiful relationship.

Despite the numerous hiccups, they still manage to come back to each other.

However, Betty just does not seem to get over Archie, and when she kissed him in Season 4, Jughead was terribly hurt.

In Riverdale Season 5, too, the pair seems to have chosen different paths, with Betty going to Quantico to train as an FBI agent, while Jughead moves to New York to pursue his writing career.

The team reunites at Riverdale to resurrect the town, which is fast becoming a ghost city, all because of the Hiram Lodge.

During the course of events, Archie and Betty decide to become lovers.

So, Jughead and Betty do not end up together in Riverdale Season 5.

What Happens to Archie and Veronica in Riverdale Season 5?

Archie and Veronica had liked each other since childhood and had been very comfortable in each other’s company.

However, Betty had also been in the scene, and it had always been a love triangle between the three.

Archie and Veronica’s relationship, too, had seen its ups and downs as the series progressed.

In Riverdale Season 5, after a seven-year jump, we found Veronica marrying Chad Gekko.

Her marriage, however, was a failure as Chad turned out to be a controlling and jealous husband, and Veronica ended up killing him.

Veronica then decides to stay back at Riverdale and launch her own business.

She also opens up a casino in partnership with Reggie Mantle.

Reggie also always had feelings for Veronica, and since childhood, he had been competing with Archie for Veronica’s attention.

Towards the end of Riverdale Season 5, Veronica and Reggie end up kissing.

So, in Riverdale Season 5, Archie and Veronica do not end up together.

Is Betty Pregnant in Riverdale Season 5?

The rumors of Betty being pregnant in Riverdale Season 5 were fueled when the showrunner, Roberto Aguirre-Sacasa, posted a picture with some emojis, which had a pregnant blonde woman as well.

Speculations went rife amongst the fans about the supposed pregnancy of Betty.

There were times when Betty and Jughead seemed to be a perfect couple.

However, gradually, they moved on, with Jughead going steady with Tabitha and Betty rekindling her relationship with Archie.

So, Betty is not pregnant in Riverdale Season 5.

As Archie and Betty get ready to start a new chapter in the relationship, a strange ticking sound disturbs their special moment.

On further investigation, they find a bomb ticking under their bed.

The series then ends with Hiram driving away with a remote detonator in his hand as smoke rises in the background as Archie’s house gets blown away.

The fates of Archie and Betty will be revealed in the upcoming season.

However, it is very likely that the beloved protagonists of the series will somehow survive this attack on their lives. 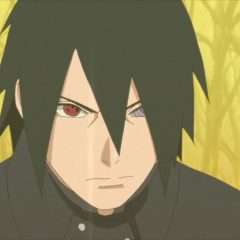 Does Sasuke Die in Boruto? and What are Sasuke’s Powers?