My Name Season 2: Has Netflix renewed it for a second season yet? (Image Credit Netflix)

My Name Season 2: Has Netflix renewed it for a second season yet?

My Name, the Korean revenge drama series, has been one of the best revenge dramas of Netflix released in recent times.

Season 1 was released on October 15 on Netflix, and the fans are already pondering on whether My Name will return with its second season or not?

The story of My Name starts with Ji-woo who’s father, Yoon Dong-hoon, was murdered by someone, and to find the identity of the man who had killed her father, Ji-woo starts her journey to find the killer and ends up in an underworld gang.

She got recruited by Mu-jin, the gang’s leader, and soon to find her father’s killer, she changed her name to Oh Hye-jin and joined the violent crimes department as a Corporal.

The new Netflix K-drama is currently being loved by fans worldwide. And for the third week straight, it is one of the most-watched series on Netflix, along with Squid Game, which was also one of the popular Korean series available on Netflix.

Unlike the Squid Game, which leaves no mystery towards ending the latest Korean series, My Name ends on a cliffhanger note.

In the series, Ji-woo finds out that her father’s real name was Joon-su; he was also the narcotics officer on the police force where Ji-woo joined with her fake name; it was revealed much later in season 1 that the actual killer of Ji-woo’s father was no-one but Mu-jin.

Yes, the same Mu-jin who welcomed Ji-woo in the gang trained her to be an assassin, and then he was the one who manipulated her into thinking the killer of her father might be someone from the police force.

Towards the ending of season 1, we also see Gi-ho survive his assassination and is currently recovering from his wounds.

Although the first season of My Name had already tied up all the loose ends, there are still many more mysteries in the plot that need to be explored if the show ever gets a second season.

My Name Season 2: Has it been renewed?

Currently, Netflix hasn’t announced whether My Name will get a season 2 or not, but based on the fact that the series has been in the top 10 list of Netflix for a third week straight, we can assume that the series will definitely be renewed for a third season for sure.

We will probably have to wait till one or two more weeks before Netflix announces the renewal status of the second season of My Name.

Those who haven’t watched the Korean series yet would recommend you watch this revenge thriller on Netflix.

What Can we expect from My Name Season 2?

In the ending of My Name, Ji-woo finally understands that Mu-jin manipulated her into doing various crimes, and Mu-jin killed her father.

She then attacked Mu-jin’s stronghold, Hotel Liber, and finally managed to kill Mu-jin.

So in the second season, Ji-woo probably turned herself into the police for the crimes she had committed.

Gi-ho, the side character of the series, who is still alive from his assassination, might play a big part in the second season.

Plus, in the finale of the series, no evidence against the Dogecheon gang’s narcotics operations or money was found in the Mu-jin’s stronghold, Hotel Liber.

The place is now accessible to the narcotics department, thanks to Ji-woo, who attacked Dogecheon’s headquarters and destroyed the area to put an end to Mu-jin and his gang.

So in season 2, as Ji-woo is expected to be in prison and if that is the case, she will come across several dangerous drug lords or criminals inside the prison, she might act as a mole for Gi-ho will bring in secrets from the jail.

Plus, the second season, if renewed, might also shed some light on the origin story of Mu-jin and Joon-su.

The finale of My Name was satisfying as Ji-woo got her revenge for her father and her lover; there is still room for a second season.

We believe there has been only half the story that has been told so far, it would be better if the series gets a second season, and we might get some more insights into the origin story of Mu-jin.

Plus, other criminal organizations might now become active, and with Ji-woo and Gi-ho coming to terms in the second season, they might be the only ones capable of stopping them.

We will update you more on the development of the second season soon.

My Name Ending Explained: What Happened to Mu-Jin? and is Ji-woo dead or alive?

My Name Season 2 Cast: Who Could be in for the second season?

My Name season 1 finale ended with only two characters alive; one is chief of narcotics unit Gi-ho and the leading lady of the series Ji-woo.

As Mu-jin killed Pil-do (Ji-woo’s lover) and one of the squad’s loved members, Gi-ho might dig all the information from the damaged Dogecheon headquarters in the second season.

Then he will most probably go after the remaining criminal gangs.

Plus, some of the gang members might now come after Ji-woo after she had killed Mu-jin, the leader of Dogecheon.

So as it is expected that Gi-ho and Ji-woo will start a new storyline altogether, there will be new casts for season 2 for sure.

So, only two characters are expected to return after the first season one is Han So-hee as Yoon Ji-woo and Kim Sang-ho as Cha Gi-ho.

In season 2, we might expect to see some more violence compared to season 1 of My Name.

As of the My Name Season 1 comes, it is undoubtedly one of the best revenge drams available on Netflix because the show has been in Netflix’s top 10 list for more than three weeks, so Netflix is compelled to answer the calls of the fans as they want to see the second season of My Name. 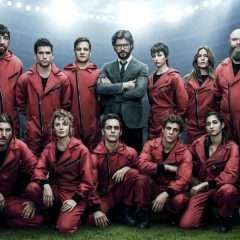