Titans Season 4: Renewal Status, Release Date and What to Expect from the Next Season?

Titan Season 4 is building up a lot of excitement among the fans of the show. The third season came to an end after falling on the parade organized by Scarecrow.

After this, there is some news which has arrived regarding the next season of the show.

This show offered DC a more thoughtful take on the sidekick superheroes of the franchise.

All the events are happening away from any supervision of the main heroes from the franchise.

The show’s first season, which had been released long back, formed the leading group of the superheroes we have been seeing in the show till now.

All of them were involved in a battle against Trigon.

The second season of the show had its primary focus on the team facing Deathstroke.

There was an addition in the team which was seen. Joshua Orpin joined the team as Superboy, and Grayson changed from being Robin to Nightwing.

As the DC Universe made its way in HBO Max, Titans Season 3 was placed in a brand new place.

In the third season, we saw that Scarecrow came in as the major villain.

The gang of superheroes became more developed as a crime-fighting unit.

In the third season, we saw the character of Commissioner Barbara Gordon was introduced. Savannah Welch played this character.

Along with that, the violent Red Hood, played by Curran Walters, was also introduced in the show.

This season came to an end in the month of October 2021, and now the fans and audience of the show are waiting for Titans Season 4.

Hence, it was thought that Titans would come to an end.

But now there is news about Titans Season 4, which has excited the fans to another level.

Titans Season 4: Is it Renewed by HBO Max?

The good news for all the fans of the show is that Titans Season 4 has finally been confirmed on HBO Max.

This was decided before the final episode for the third season of the show had been released.

In DC FanDome 2021, we had received a confirmation that Titans Season 4 was a yes from the side of HBO Max.

Till now, we have no precise release date for the show.

The time period between the second and the third seasons was a lot because of the COVID-19 pandemic situation.

We can expect the new season to arrive by the earlier half of 2023.

This could be the best guess on the timeline that we can provide you as of now.

As days go, we will get more about the Titans Season 4 release, and we will definitely keep you updated on that.

How did the previous season set up the base for Titans Season 4?

Titans Season 4 will definitely come up with several exciting elements for the fans.

We might get to see Nightwing and the gang put an end to Scarecrow’s plot to kill the people of Gotham.

We will see Raven using Lazarus pit’s nightmares to make sure that Crane does not come back into action permanently.

The final episode of the show’s third season leaves us with a lot of details for the upcoming storyline in the next season.

We will see Nightwing as the leader and his team fighting against more dangerous criminals.

He will also be training Tim Drake to become the next Robin.

Donna Troy will be joining hands with Vee, thus becoming a member of ARGUS.

Grayson had earlier made a comment about Jason Todd which states that Todd would go away from Gotham and join his friends in San Francisco.

In the final episode of Season 3, we also got to know that Vee has been keeping information about Ra’s al Ghul after placing a Lazarus pit in the city of Gotham.

This was a part of a bigger plan which he had in mind.

There are high chances that in Titans Season 4, Ra’s al Ghul would emerge as the primary villain.

He will be bringing some major threats for the Titans.

By the end of Season 3, we also saw that Barbara Gordon and Grayson’s relationship had come to an end.

This made way for Starfire and Nightwing to revive their romantic relationship.

Whom will we get to see in Titans Season 4?

As Brenton Thwaites had made the announcement for Titans Season 4, there are high chances that we will get to see him playing the character of Nightwing.

Along with him, we will be seeing the original members of the show like Beast Boy, Raven, and Starfire.

There are other superheroes who were a part of the team in the third season, like Tim Drake, Superboy, and Krypto, the dog.

The future of Jason Todd in the show is vague.

Curran Walters has increased the level of excitement of the fans for the fourth installment of the show. He will also be returning this season.

There are a lot of parts where we will also get to see Wonder Girl along with Vee (played by Karen Robinson).

If we consider the case of the character, Barbara Gordon, then there are very few chances that we will get to see her in this new season.

The primary reason is that she will try to move away from the city as she has broken up with Grayson and will be looking forward to a new life.

Iain Glen as Bruce Wayne might also be seen in Titans Season 4.

If Blackfire plans to return to Tamaran, then she will not be seen in Titans Season 4.

However, her kiss with Superboy makes us believe that there are chances we will get to see her in the new season.

Stay connected with MediaScrolls to know more about the new season of the show.

We will bring you updated news as soon as we get hold of them. 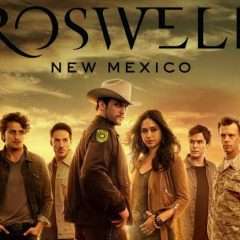 Roswell, New Mexico Season 4- Will There be a Season 4 of the Series?