Platinum End Episode 3 took an exciting turn. Saki, Mirai’s childhood friend and the one he liked all his life is a God Candidate.

The angel which he saw in his high school was her partner.

Mirai blew his cover as the angel noticed that he could see him and caught him off guard.

Soon enough, Saki attacked Mirai with a Red Arrow! Yes, Mirai is now under her control, and she has asked him to meet her later secretly.

To know what happened next, make sure to read out till the end.

Also, in Platinum End Episode 4, Mirai and Saki will see the Metropoliman. Will he find and kill them?

Other God Candidates also attack Metropoliman, but the Red Arrows cannot pierce him.

Has he acquired a new power? How is it possible that Red Arrows are not affecting him?

To find an answer to this, check out the spoilers in the next section.

Also, Let us know your thoughts on how Metropoliman can prevent the Red Arrows from hitting him?

Platinum End Episode 4: Release Date and Where to Watch Online?

The episodes of Platinum End are available on various platforms, including Crunchyroll, Funimation, Anime Digital Network, and VRV through Crunchyroll.

Platinum End Episode 4 can be streamed online on Crunchyroll from 01:28 am JST.

Platinum End Episode 4: Spoilers and What to Expect?

Platinum End Episode 4 will be very interesting, as we can expect from the author of Death Note.

The biggest question is How is Metropoliman able to prevent the Red Arrows from hitting him? Let us see what has happened with Metropoliman.

Metropoliman has called all of the remaining eleven God Candidates to meet him in an open stadium.

He says that they all are on the same side, and therefore he wants to meet them.

The stadium has been selected so that any candidate can come or escape as he seems fit.

Mirai and Saki have also entered the stadium and mixed themselves with the crowd.

They have not been accompanied by their Angels so that they cannot be recognized as God Candidates by other angels or candidates themselves.

They find that many angels are present at the stadium, and this eventually means many of the God Candidates have also come there to hear Metropoliman out.

Two of the remaining eleven God Candidates have dressed in similar superhero costumes and have approached the scene.

One of them attacks Metropoliman with a Red Arrow.

But the Red Arrow is not able to touch Metropoliman.

How is this possible? He has not flown away with his wings, so there should be no way for him to be safe from the Red Arrow.

Does he have more power than a special-ranked angel’s God candidate? What is Metropoliman up to?

There is one possibility that might be true here. Metropoliman might have been hit by a Red Arrow before, and therefore he cannot be affected by it again. But who could have hit him? Does this mean he has an ally too?

What does Metropoliman plan by calling all the God candidates in the open?

Will he kill them? Or does he plan to bring them together all of them and help the people to solve crimes? The latter one doesn’t sound authentic, but that’s what he says.

Platinum end Episode 4 will bring more turns as the actual motive of Metropoliman is revealed.

Will Mirai and Saki be recognized as the God candidates? Will he go after them to kill them?

Also, is Saki in more danger now as she is associated with a remarkable ranked God Candidate? Watch the episode this coming Friday to know more.

Platinum End episode 3 was an exciting one as it was unexpected that Mirai’s childhood friend and love, Saki is a God Candidate and shoots him with a Red Arrow.

Mirai reaches his high school for the first day, and guess what? He finds an angel there.

He is alone and has left Nasse at his home, so he does not reveal that he is a God Candidate.

But his surprise at seeing the angel is noticed by it and approaches him.

Mirai is shocked by it. Moreover, the angel informs him that his God Candidate is also in the same high school.

To add more to it, he says she is just behind him. Before Mirai could respond, he was shot through the heart using a Red Arrow.

The person who shot him with the Red Arrow turned out to be Saki, his childhood friend and the girl he loved.

Mirai is shocked to know that Saki is also a God Candidate.

He believed that since he already had feelings for her, the Red Arrow might not affect him. But the arrow had its effect, and Mirai was in love with her.

On her angel’s order, Saki confirmed through Mirai if he had Wings, and he replied spontaneously.

After confirming he had wings, Saki asked him to go to her house and enter her room through the balcony, unnoticed by anyone.

Mirai flew at once; being under the spell of Red Arrow, he couldn’t even think about anything.

Mirai reaches her home and slips in through the window. He is overjoyed to be there, in the room of his love.

He already loved Saki, and all his joy was not from being under a spell.

When Saki arrived home after completing school, she informed him that they were in the same class.

The angel asks him if his angel is the first rank or second-ranked, and he swiftly replies that it’s Special Ranked. Surprised with the turn of events, she confirms if he has White Arrows, and Mirai tells them he does.

The answer troubles the angel as he suspects Mirai to be Metropoliman.

Mirai assures them that he is not, and then the angel explains that since he is a second-ranked Angel, Saki doesn’t have wings, and she needs them to flee from other attackers’ Arrows. Mirai assures him that he will protect Saki.

The angel asks them to practice flying together.

Mirai and Saki join each other’s hands, and the rings that angels give them bind together.

The only way to break it would be if both of them wished to undo the Bond.

They go to the balcony, and Mirai spreads his Wings. They fly together with great speed into the sky.

When they return, the angel explains to them the procedure of how God will be chosen.

He adds that Metropoliman wants to kill all other God Candidates so that he can become God. Also, Metropoliman’s angel is a special ranked angel, too, and that’s why he has White Arrows as well.

Mirai is determined to protect Saki and cannot let her die.

He says that he will attack Metropoliman. He is ready to sacrifice his life for Saki.

Soon, Nasse reaches there and explains that he should not do so.

Saki also requests her to not to go after Metropoliman.

Saki’s angel asks Mirai to live with Saki so he can always protect her, and guess what? Mirai is overjoyed at the thought of living with Saki.

Nasse teases Mirai to have been shot by the person he should have shot with the Red Arrow.

Mirai’s angel Nasse and Saki’s angel Revel agree. Nasse is kind and pure-hearted, whereas Revel is intelligent and cunning.

She uses tricks to manipulate people. She is also known as the “Angel of Trickery.”

Nasse reveals Rebel’s true motives to Mirai that since the Wings and Arrows can be transferred to another person after the death of its owner, Revel plans to give them to Saki by using Mirai.

Nasse assures Saki and Revel that Mirai will never hurt Saki as he always had feelings for her and would never harm her even if he had not been under the spell of Red Arrow.

Meanwhile, Metropoliman was keeping up his work of punishing criminals to play the Hero.

Later we see Metropoliman with his special ranked angel.

He expresses how he hates to do it and how no other God Candidate has come to attack him after his declaration about a month ago.

The angel says that they might be afraid of getting killed by him and must avoid him.

Later after 33 days, we see Mirai tied up to a chair. The effect of the Red Arrow has dissolved, and Revel fears that Mirai might attack Saki.

When they see that Mirai is still the same as before, they are sure that he always loved her and his actions are still the same except that he does not confess his love anymore as the effect of the arrow has worn out.

Saki apologizes to him for shooting him with the Red Arrow, and he assures her that it was for good as, without it, he would have never been able to express his true feeling for her.

They both talk about how they wish to be happy rather than kill and escape from other God Candidates.

Then they watch on the news that Metropoliman makes a statement, “To my eleven enemies- no, in some ways, we are kindred spirits. I realize now that we’re on the same side. I desire a peaceful resolution. Let’s get together and talk things out.”

He asks them to come to a Stadium after two days at 3 pm.

Revel also explains that the stadium has been chosen so that any candidate can quickly come and go using his wings.

Also, many people will be at the stadium to watch Metropoliman, so the God Candidates who do not have Wings can mix in the crowd.

Both these ways reduce the risk to God Candidates.

Mirai decides that they must go to see what Metropoliman is up to.

He asks Nasse and Revel not to accompany them as it will reveal that they are God Candidates.

Mirai and Saki go to the stadium after two days.

They bind their rings together so they can fly away together using Mirai’s wings if the need arises.

They find many angels in the stadium and believe that there are many God Candidates there.

Revel had also taught them not to react when they see an angel as it will blow their cover.

Metropoliman reaches the stadium at the decided time, and just after that, two more people arrive at the scene dressed like him.

They both fly in the air using their Wings and are known as Metro Blue and Metro Yellow.

One of them shoots a Red Arrow at Metropoliman, aiming right at his head. But the Red Arrow does not pierce him.

The Red Arrow is opposed by an unknown energy barrier that prevents the arrow from piercing it.

How is it possible? Does Metropoliman have another power that prevents arrows from hitting him? Who is Metropoliman?

Let us know in the comments below about what you think is happening there. And who are Metro Blue and Metro Yellow? Are they allies or enemies?

Why did their attack on Metropoliman did not work? Why are they dressed like him? Are they together planning to kill the other God candidates?

The answers to all these questions lay in the Platinum End Episode 4, releasing this coming Friday. Stay tuned till then as we bring the detailed episode next week. 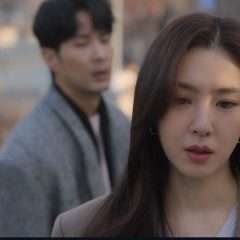