American Rust Episode 7 is about to be released soon.

There was an unexpected twist as well, in the form of some shooting and unexpected suicide.

American Rust Episode 7 Release Date and Where To Watch It?

In Canada, American Rust Episode 7 is available on Crave.

What To Expect From American Rust Episode 7?

In American Rust Episode 7, we will see Isaac’s lonely journey towards Los Angeles after surviving a hate attack.

With so many hardships along his path, he might even decide to go back to Buell and surrender himself to the authorities.

In American Rust Episode 7, we will also find out how Bill is coping with his life in prison, along with the delinquents.

Elsewhere, Harris is likely to keep searching for Bobby, who has eluded him so far.

In American Rust Episode 7, we might also get to know who set Grace’s car on fire and how she is dealing with her co-workers after her meeting with Gelsey.

She might have to face the ire of her co-workers as Gelsey has threatened to shut down or shift the company, leaving the workers unemployed.

American Rust Episode 6 has been titled “Debt Collection.” As the title suggests, in this episode, Harris and his former partner from Pittsburgh, Chuck, drive to Pittsburgh, where Harris has to repay an old debt.

His target is a waiter working there at a restaurant.

Meanwhile, Isaac gets badly beaten and spray-painted by a group of homophobic people.

Elsewhere, Alejandro and Lee, along with Grace and Virgil, go to attend Billy’s bail hearing at the court, where the judge rejects Billy’s bail plea, despite the efforts of the public defender.

Billy is sentenced to Farmington Tri-County Prison, where convicted felons are kept.

On their way back home, Grace accuses Lee of having an extramarital affair with Billy, making Alejandro leave Buell.

What Happened To Chuch in American Rust Episode 6? Is Chuck Dead?

A decade back, when Harris was in Pittsburgh and crime there was at its peak, Harris, Chuck, and other colleagues had taken an oath that they would eliminate the criminals even outside the boundaries of the law.

However, Harris left Pittsburgh and came to Buell to clear his name from an extrajudicial killing his colleague had done.

According to Chuck, Harris had betrayed that oath a decade ago, and Chuck had come to Buell to collect that debt from him.

Together, they set out for Pittsburgh to assassinate Samuel Traven, a criminal now working as a waiter.

However, when the time comes to assassinate Traven, Harris expresses his inability to do so. Chuck gets furious and hits Harris.

Chuck then enters the restaurant and shoots Traven, and then shoots himself, as well.

Harris, in an efficient manner, clears away his fingerprints and heads back to Buell.

On returning home from the court, Grace finds her car scratched all over, with the number “51” written on it.

The significance of number 51 is that Grace had visited Gelsey with her lawyer to tell him that they had the support of 51% of the workers of his dress-making facility. So, it is evident that someone is making fun of this claim of hers.

Later that day, when Harris comes to Grace in an injured condition, and as they rest inside the trailer, someone sets fire to her car, which later explodes.

This, too, might be the handiwork of the same miscreants who had scratched her car earlier.

American Rust is a drama series created by Dan Futterman and is based on the novel by the same name by Phillip Meyer. 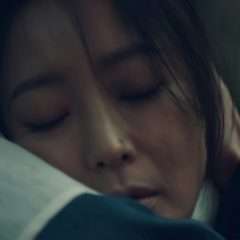