Only Murders in the Building Season 2 (Image Credit: Hulu)

Only Murders in the Building Finale Ending Explained: Who Killed Tim Kono and Why?

The release of the highly-awaited Only Murders in the Building finale marked the end of Season 1 of this immensely popular series.

At the end of Only Murders in the Building finale, the fans’ worst fears have been confirmed, and the show ended in a cliffhanger. Sezz Pataki was so right about Tim Kono’s murder being a crime of passion.

Even after the murderer of Tim Kono was revealed in the Only Murders in the Building finale episode, the show still managed to surprise us yet again.

As Mabel said, there are still some loose ends left, and there is still a murderer at large in the building.

Read on to know all about Only Murders in the Building finale. (Spoilers ahead)

Only Murders in the Building Finale Recap: Who was Tim Kono’s Girlfriend? Who Killed Tim Kono?

Only Murders in the Building finale begins with Tim Kono as the narrator, recalling the 23 seconds he had spent in the elevator with three people just twelve minutes before he was murdered! Tim confesses that he was never very good with people but never felt lonely until after losing his friends.

So, when Jan entered his life, he welcomed her with open arms.

Yes, it is finally revealed in Only Murders in the Building finale that Jan was Tim Kono’s mysterious girlfriend!

Meanwhile, Oliver and Mabel, suspecting Jan to be the killer, go to Charles‘ apartment to warn him.

Fearing for Charles’ safety, they even try to break his door.

Right at the moment, Charles comes out of the elevator, having just returned from Jan’s concert, his nose still bleeding.

Oliver and Mabel present him with the evidence (the bassoon cleaner), but Charles is just not ready to listen to them.

Saying that their theory is just absurd, he turns them out of his apartment.

Oliver and Mabel decide to investigate further in Jan’s apartment, believing that she is still at the concert.

Jan leaves her concert mid-way after the intermission, and she comes to meet Charles. She apologizes to him for having lied about being a first chair bassoonist.

Charles invites her in, where Jan makes drinks for the two, and very lovingly, wipes the blood off Charles’ nose.

She wonders why the bassoon cleaner was lying on the table, and Charles tells her that though Oliver and Mabel suspect her of being Tim Kono’s murderer, he does not.

Charles and Jan confess their love for one another, and some cozy talk later, Jan asks Charles why he has not finished his drink. Charles says that he knows that Jan has laced his drink with the same poison she had used on Tim.

So, he was just stage sipping.

Only Murders in the Building Season 2: Will there be a Season 2 of the Series?

Why Did Jan Kill Tim Kono?

All this while, Charles had known Jan’s truth because of the note she had written to him, whose handwriting matched Tim’s suicide note that the trio had found in the trash.

Being exposed brings Jan to her true self, and she confesses it all in front of Charles.

Tim had broken up with her, and Jan is not a person to take being dumped in her stride, as she hates being number two.

She called Tim Kono a couple of days later for a friendly drink.

Not realizing that the drink he just had, was poisoned, Tim went back to his apartment.

After ringing the fire alarm, Jan went to Tim’s apartment, where he was struggling for his life, and shot him with his own gun.

She also took away the emerald ring with her, thinking that Tim had meant it for another girl.

She even interprets the death of Howard’s cat, Evelyn, saying that he must have licked Tim’s poisonous blood.

All this while, Charles has been stumbling and feeling dizzy, with his speech slurred.

He collapses on the floor, realizing that the drug was on the handkerchief that Jan had used to wipe his nose and not in the drink.

Leaving him incapacitated, Jan then leaves Charles’ apartment after leaving the fireplace on.

She then tries to eradicate the other residents of the Arconia by poisoning the duct that connects all the fireplaces of the building.

Meanwhile, at Jan’s apartment, Mabel and Oliver find many incriminating pieces of evidence like an assortment of poisonous drugs, the knife with which Jan had stabbed herself, and the emerald ring.

Armed with this knowledge, they rush back to Charles’ apartment.

However, Charles, having mustered all his strength, just about manages to reach the elevator, making Oliver and Mabel miss him by a whisker.

After some comic misses, they do manage to find Charles in the elevator.

They also find that Charles has recorded Jan’s confession on his mobile phone.

The final showdown in Only Murders in the Building finale happens in the basement of Arconia, where Mabel and Oliver finally manage to overpower an armed Jan.

Only Murders in the Building Episode 9 Recap

Only Murders in the Building Finale Ending Explained: What Happens to Charles and Jan?

After handing Jan over to the authorities and sending Charles to the hospital, all seems well in Only Murders in the Building finale.

The eviction notices of the trio are revoked, Will visits Olives, saying how proud he is of his father, Charles tries to reconnect with Lucy, while Mabel and Oscar, too, finally find some peace.

All three of them find not only a purpose in their lives but also best friends for life. Everything seems fine as the trio has a toast at the rooftop of the Arconia when Mabel goes to her apartment for more champagne.

Charles and Oliver hear sirens, and both of them receive a message (having three exclamation marks!) from an unknown number to leave the building immediately.

Deciding that they can’t leave without Mabel, they go to her apartment, where they find her covered in blood and sitting in front of a tie-dyed hooded dead body. (Remember the first scene of episode 1?)

Mabel tells Charles and Oliver that it is not what they think, and the dead body has just stumbled upon her.

It turns out that it was Bunny’s dead body that was stabbed with Mabel’s knitting needle.

We wonder why Bunny was wearing the podcast’s official hoodie (the tie-dye hoodie) when she hated the podcast.

The trio is then arrested on the charges of murdering Bunny.

You can watch Only Murders in the Building on Hulu. 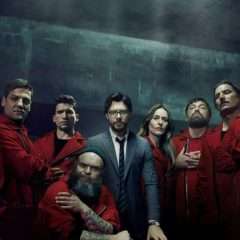