Halloween Kills is the twelfth movie of the Halloween franchise, and it picks up where the 2018 movie Halloween had left the viewers.

Michael Myers comes out of the burning house unscathed and continues with his killing spree.

Read on to know if the residents of Haddonfield are able to contain this serial killer or not.

Universal Pictures released it in theatres across the United States of America on October 15, 2021. It is available on the streaming service Peacock.

Halloween Ends, a direct sequel of Halloween Kills, is going to be released on October 14, 2022.

The Plot of Halloween Kills: What is it About?

In Halloween, Michael Myers was seen locked in the basement by Laurie Strode, her daughter Karen, and granddaughter Allyson, who then set the house on fire.

In Halloween Kills, it is discovered that Michael survives the fire, killing several firefighters in the process.

Laurie is in the hospital with a knife wound, and Officer Hawkins accompanies her, feeling somewhat responsible for the turn of events.

Hawkin’s thoughts go back to 1978, where, in the flashback, we can see that he, along with his partner, tried to capture Michael.

Hawkins accidentally shot his partner instead of Michael and later, ridden with guilt, stopped Loomis from shooting Michael.

Michael returns to Myers’ house, killing Lonnie and his son Cameron. Allyson stabs Michael, which has little effect on him.

He tries to kill Allyson, but her mother, Karen, stabs him in the back and removes his mask.

Michael follows her across the street, where Tommy Doyle has collected the residents of Haddonfield to tackle him.

Karen stabs Michael again with his own knife and believes that this has finally killed him.

She goes back to the house to her daughter. Leigh Brackett tries to shoot him to confirm his death, but it turns out that Michael is not dead after all.

Springing up the next moment and grabbing the knife from the back where Karen had stabbed him, he slashes Leigh’s throat. Not satisfied with this, he kills all the residents present there, including Tommy Doyle! Michael then goes to Myers’ house, looking for Karen, and stabs her multiple times.

Whether she survives the attack or not wasn’t made clear in the movie.

The manner in which Michael survives all the attacks on his life shows his extraordinary strength and ability.

He may be a man of flesh and blood, but he is very powerful and seems to draw power from all his killings.

The massive number of casualties in Halloween Kills is just mind-boggling, with only a handful of the characters managing to survive.

We can expect to see Laurie, Allyson, Officer Hawkins, Lindsey, and Julian in Halloween Ends, besides Michael.

We definitely hope to see Karen again, hoping she survives the attack.

The residents who did not participate in this violent face-off are also expected to survive.

Halloween Kills Review: Our Take on the Film

Halloween Kills has some exceptional performances from his cast. Based on a wafer-thin plot, the movie can’t boast of much of a storyline.

Full of blood and gore, the movie has too much violence in it and is definitely not for soft-hearted people.

The cinematography from Michael Simmonds is brilliant at times, and the background score by John and Cody Carpenter is quite haunting.

Should we watch it or skip it?
Halloween Kills is filled with great performances by Jamie Lee Curtis, James Jude Courtney, Judy Greer, Anthony Michael Hall, and Kyle Richards. Written by David Gordon Green, Danny McBride, and Scott Teems and directed by David Gordon, the movie can't boast much of a storyline as it is based on a thin water plotline. But because of its cinematic brilliance by Michael Simmonds, the film is suitable for a one-time watch. A personal suggestion for the people looking to watch this film is that it is filled with violence, so it is not for soft-hearted people. If we had to rate it, we would probably give it a 66/100.
66 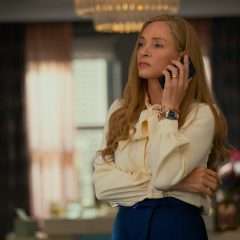