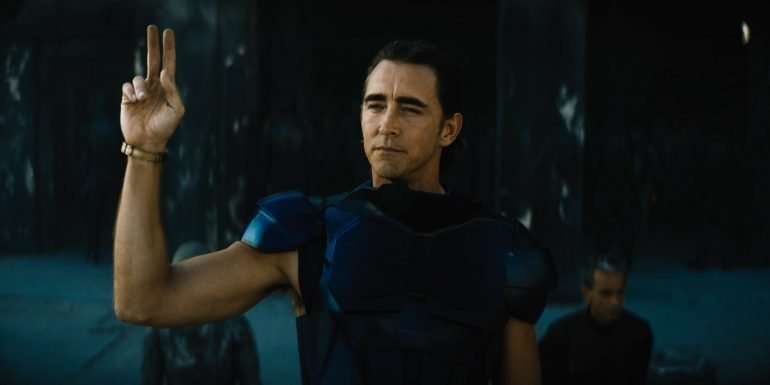 Soon to be released, Foundation Episode 4 will show its viewers the fate of planet Terminus, which is under attack. Its warden’s life is also in danger. Hari Seldon’s team has reached Terminus without its leader and has a huge task ahead. Here is an insight on what to expect from Foundation Episode 4.

Foundation Episode 4 Release Date and Where To Watch It?

Foundation Episode 4 is about to be aired on Apple TV+ on October 8, 2021, at 3 AM ET. The first two episodes of Foundation were aired simultaneously on September 24, 2021.

Foundation is available exclusively on Apple TV+, being an Apple original production. Viewers can avail of the seven-day free trial to have a look at the show.

What To Expect From Foundation Episode 4?

Foundation Episode 4 has been titled “Barbarians at the Gate.” The title of the episode itself is suggestive of the spaceships from Anacreon approaching to attack planet Terminus. Having lost all communication with the Empire, the citizens of Terminus seem ill-equipped to handle this situation.

In this episode, viewers will get to see the grit of the new clone king, Brother Day, who handles this attack on the fringes of his Empire. In the upcoming Foundation Episode 4, we will also find how the newly arrived team of Hari Seldon tries to fend off the attackers.

In the previous episode, we saw Salvor, the warden of Terminus, being ambushed. Foundation Episode 4 is likely to show a face-off between Salvor and the mysterious woman, who is trying to overpower her. In the upcoming episode, we might also discover more about the hanging Vault.

Later, the story cuts back to the present, where Demerzel, the humanoid advisor to the Emperor, discloses that Cleon the First began cloning himself to continue ruling his Empire.

Later, the ascension ceremony, a mild term for the death ceremony of the eldest galaxy empire, Brother Dusk, takes place, who is to be replaced by the young clone, Brother Dawn.

Elsewhere, on Terminus, the newly arrived team of scientists are panicked to see Anacreon’s spaceships approaching their planet.

The team hopes to get some help from the galactic capital, Trantor, while the warden has already started fortifying the planet’s defenses.

Unfortunately, while chasing a child running off, Salvor is seen surrounded by a mysterious woman and her team, who are seemingly from Anacreon in the closing scenes of Foundation Episode 3.

Foundation is a science-fiction thriller drama series based on the Foundation series of stories by Isaac Asimov and created by David S. Goyer and Josh Friedman.