Edens Zero Episode 22 is due this week, and we might be introduced to some stunning developments about Valkyrie. How does everyone know her? What has she done? Is madame Kurenai holding her prisoner? Answers to all these questions are going to be found soon in the new episode of Edens Zero.

After the epic battle from Edens Zero Episode 21, we saw Rebecca, Happy, Shiki, and Homura defeat the greatest stone monster of the labor district. Still, the numbers on their collars have returned to 1,00,000 jewels. Also, Madame Kurenai plans to destroy the labor district and kill everyone in it.

Edens Zero Episode 22: Release Date and Where to Watch Online?

Edens Zero Episode 22: Spoilers and What to Expect?

Edens Zero Episode 22 will bring out the story of Valkyrie, the fourth Shining Star of the great Demon King Ziggy, and the Sword of Edens. In the last episode, we saw Valkyrie’s subordinate at the labor district give Homura a data cube similar to the one used by B-Cubers like Rebecca, which contains the truth about ‘why Valkyrie disappeared?’

Also, we might discover where Valkyrie is and has Madame Kurenai has taken her as a prisoner? Shiki and Homura might go after her and find her.

To add more to this, Episode 22 will become more exciting as Madame Kurenai plans to destroy the entire Labor district along with all the miners in it. Also, we expect that she might get a new lead on Edens Zero and know that the ship is near her planet.

Shiki, Homura, and Rebecca are not likely the ones to sit and relax, waiting to be destroyed. So they might find a way to escape the labor district and take everyone with them. Also, Valkyrie’s subordinates might help them get rid of their collars using his special ability to steal things using Ether Gear.

What will happen if she finds out Shiki is the new Demon King and owns the Edens Zero? Will she find Edens Zero? Is Valkyrie okay? Answers to all these questions are in Edens Zero Episode 22.

Know About the Recap of Edens Zero Episode 20

Edens Zero Episode 21: Recap and what we know?

Episode 21 begins with Rebecca and Happy, and Pino entering the labor district with help from another B-Cuber friend who works for Madame Kurenai. There they meet with a lowly thief miner who has the special ability to steal things in his 10-centimeter radius using ether gear without touching them.

He takes them to Shiki and Homura, battling the greatest stone monster with the hardest scales on the entire Jewel planet. No one in history has survived the battle, and Shiki and Homura are badly beaten up. Homura’s ether gear sword also proved to be weak against the scales of the monster and broke.

Precisely at the moment, Rebecca joins them and teams up to fight the monster. Pino being an android, finds a weak spot for them to attack, and the combined attack of Rebecca helped by Shiki and a powerful slice attack by Homura does the job.

After the monster is defeated, the numbers on Shiki and Homura’s neck collar are reduced to zero but soon enough is restored to 1,00,000 jewel count. They realize at the moment that Madame Kurenai never plans to release them.

Also, as the episode ends, we see Madame Kurenai planning to destroy Labor District and kill everyone in it. Will Shiki be able to stop her or escape this? Will Shiki save everyone in the district? To know how it all ends, make sure to watch the Edens Zero Episode 22 this Sunday. 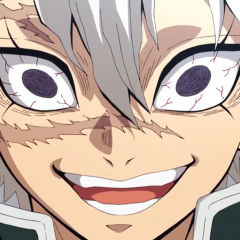