Titans Season 3 Episode 7: Release Date, Spoilers and What to Expect?

Titans Season 3 Episode 7 will be aired on HBO Max on September 9, 2021, at 3 AM Eastern Time (ET). The third season was premiered on August 12, 2021, and its thirteenth and final episode will be aired on October 21, 2021. New episodes of duration 40 to 50 minutes each are streamed every Thursday.

What To Expect From Titans Season 3 Episode 7?

How the people are going to react under the influence of the drugs will be seen in Titans Season 3 Episode 7. Scarecrow is also likely to take some action on Jason, who has gone rogue.

Where Barbara and Blackfire fit into Scarecrow’s plans remains to be seen in the upcoming episode. The Titans are likely to intervene in this matter even if it means defying the authorities.

A Recap of Titans Season 3 Episode 6.

The beginning of Titans Season 3 found Jason Todd, a former Titan, and the second Robin, being butchered to death by Joker.

It made the Titan team of Dick Grayson, Kory Anders, Gar Logan, Conner Dawn Granger, and Hank Hall arrive at Gotham city. Jason was resurrected as the villainous Red Hood. The Titans took it upon themselves to protect the city of Gotham in the absence of Bruce Wayne.

Titans Season 3 Episode 6 has been titled “Lady Vic.” At the beginning of the episode, a happy State Trooper couple is shown to be murdered by a vengeful woman, the eponymous Lady Vic, who then heads to Gotham city.

Then, a flashback makes a massive revelation that six years ago, the present police commissioner, Barbara, was involved in robberies of precious artifacts.

During the course of the robbery, she had encountered Grayson as Robin, with whom she was later romantically involved. She had even recruited Dick Grayson to join her.

Meanwhile, Scarecrow (Jonathan Crane) takes Jason around his lab, where his special serum is being produced. Jason wants this drug to be immediately out on the streets of Gotham.

However, Scarecrow insists that the process would take some time. Scarecrow steals a piece of surgical equipment called Shortwave Positron Multiplier from the Thomas and Wayne Memorial Hospital with the help of Lady Vic and Jason.

Starfire is quite wary of her sister, who she thinks is a villain. Still, the sister duo teams up with Superboy, Conner, to try and track down the inventor of the medical equipment when Grayson informs them about this theft.

When they arrive at the lab, Starfire asks Blackfire to stay in the car with Conner. Conner shares a bond with Blackfire as she is an alien from Planet Tamaran, while he, too, is facing an identity crisis, being half Kryptonian and half-human. He even asks her to join the Titans.

Starfire finds the inventor scientist strapped to a table with a bomb implanted on her body inside the building. Conner rushes in and deactivates the bomb.

From the scientist, they learn that Shortwave Positron Multiplier would allow Scarecrow to manufacture his drug at a faster rate. When Starfire and Conner get back to the car, they find that Blackfire has disappeared.

However, they find Blackfire waiting for them at the Wayne Manor. She tells them that she had been gathering information about this, to which Starfire says that she does not trust Blackfire.

Grayson asks Barbara to let him investigate the crime scene, which she refuses. Barbara is then supposedly asked by Bruce to meet her alone, but this happens to be an ambush where Lady Vic has used a copy of Bruce’s voice to trick her. When Barbara arrives at the scene, Lady Vic attacks her.

A flashback shows that six years ago, Grayson and Barbara had a conflict with Lady Vic and her partner, in which Lady Vic’s lover was accidentally killed. So, it is now evident that this ruthless assassin is here to settle her unfinished business with Grayson and Barbara.

The fact that Lady Vic had killed two cops who had nothing to do with her and were romantically involved proves that Lady Vic can’t stand the sight of lovers after having lost her lover.

When Barbara manages to draw her gun, Lady Vic disappears instantly, but not before getting a scan of Barbara’s face. Back at Barbara’s apartment, Grayson reminisces over his romantic days with Barbara.

Meanwhile, Jason, who always had issues taking orders from anyone and also has an inpatient streak about him, gets rebellious. He takes away the stock of whatever drugs were available at the laboratory and gives it to a bunch of thugs to distribute in Gotham city.

In the final moments of the episode, the thugs attack Drake’s Noodle Restaurant with the supply of drugs, which has Tim Drake’s father bleeding out in front of him for no apparent reason. 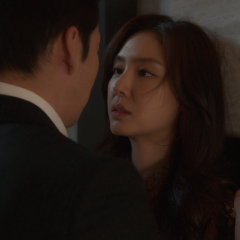