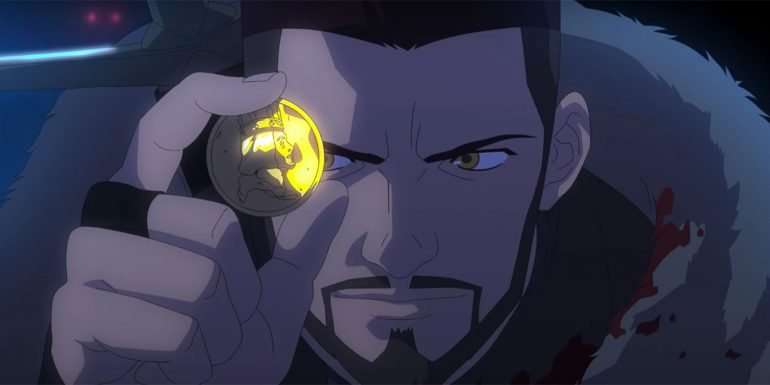 The Witcher: Nightmare of the Wolf Review and Ending Explained: Story of Vesemir Portrayed Gracefully

The Witcher: Nightmare of the Wolf has been released on Netflix officially based on the polish writer Andrzej Sapkowski. The film’s story mainly focuses on the early life of Vesemir, who was a father figure and mentor of the Geralt of Rivia.

Produced by Lauren Schmidt Hissrich, the live-action thriller “The Witcher: Nightmare of the Wolf” early reviews and responses are out, so let us discuss what the series is all about without further ado.

The Witcher: Nightmare of the Wolf-What is It About?

The Witcher: Nightmare of the Wolf film is about Vesemir, who was the father figure and mentor of the Geralt of Rivia. The plot sets way back in way early 1263.

Vesemir and his father were servants of a rural lord whose wife was suffering from a unique disease that had no cure.

So one day, when was gone to acquire some blue gum for the lady, they came across Skelligan Witcher Deglan. After hearing about the lady’s ill health, they told them to guide him to the lady to help.

Vesemir takes Witcher Deglan to that lady, and after reaching there, he soon finds out that the woman has been possed by Mahr which was the reason behind her ill health. And after that, Vesemir kills that beast.

Vesemir was very much impressed with Deglan on how he fought of Mahr, and while departing, Deglam gave him some coins so that the young boy could have a better future. But Vesemir decided to follow Deglan to Kaer Morhen, leaving his old life and Illyana behind.

At that time, Illyana gives some sad news to Vesemir that his father and the nobleman and noblewomen they used to serve are now dead. And Illyana was lucky enough that she got a kind, generous family of Kaedwen nobles.

She tells Vesemir to forget about his past and focus on finding a new purpose for his life.

Vesemir tries to complete his remaining training to become the Witcher, and after undergoing trials, he manages to do so and becomes A Witcher.

Like most Witchers, he used to kill monsters for money and quickly gained notoriety for his name for his apathy and hunger for gold.

He also saved a noble child from a Leshen at the outskirts of Ard Carraigh, which is the capital of Kaedwen. However, he leaves the remains of the child’s father and sister there.

But, the encounter with the Lehsan had made him understand that something far more dangerous must be lurking at the Frest, which might kill anyone if they get close to it.

Although it draws the attention of Tetra Gilcrest, one of the sorceresses of Kaedwen, Tetra Gilcrest, after hearing all this suggests the king attack Kaer Morhen and burn it to the ground.

But then Lady Zerbst defends them against Tetra’s charges. Then during a bar fight, Vesemir and a fellow Witcher fought with a couple of knights, and in the process, they kill them, for which they were taken into custody.

Soon after that, Vesemir learns that Lady Zerbst is Illyana, the son of Kaedwen noble first took her and then married her and so far Illyana had led a happy life and had three daughters and a grandchild,

Vesemir recalls that it has been five decades since they last saw each other, and unlike Vesemir, who was training to become A Witcher, his aging process slowed. On the other hand, Illyana resembles her age.

She further offers Illyana that King has offered to set Vesemir free if he and Tetra kill the hybrid who had been lingering in the deep forest and killing people.

Vesemir agrees to help and work with Tetra, and after going to the mission together, they came across a hybrid called Kitsu (mixture of elf and a Mahr).

The creature had the power to create illusions; apart from that, they also came across some subspecies of basilisk that they have never encountered in life.

Eventually, Vesemir got to know why this hybrid was created. The truth behind that surprised and shocked him to his core.

The Witcher: Nightmare of the Wolf-What is the truth Behind the Hybrids, and Why were they created?

These Hybrids were created during ancient times to fight off elves and the Old Races.

Reidrich, the head mage of the Witchers at Kaer Morhen and his acolytes, already knew the secret behind the hybrids, and they were safeguarding those secrets for a long time had mastered the process of alchemy. (Alchemy is a process by which ordinary human beings are turned into Witcher)

So as the Witchers were hunting those monsters for more than 100 years, the number of monsters had diminished over time, and because of this, Deglan came up with a plan to make new monsters by engineering new species.

As a result, Reidrich created the hybrids between Kitsu and Mahr, which later made monsters out of her imagination out of the 11 girls she kidnapped.

Although these experiments were unsuccessful, Vesemir and Tetra find the remains of the unfortunate 11 girls who died.

Tetra also finds out that the Kitsu-Mahr hybrid is still alive and convinces the creature to join her in a fight to seek vengeance against the Witchers.

It is also revealed that a Witcher had killed Tetra’s mother previously by accusing her of stealing.

Tetra soon returns to Ard Carraigh and explains to King everything related to the Witchers’ crimes for several years.

Shortly after that, King first orders Luka to be executed and then sends out Tetra with the soldiers and her followers to Kaer Morhen to confront Deglan and Reidrich.

The Witcher: Nightmare of the Wolf Ending Explained: What Happened to Illyana, Deglan, Reidrich, and Deglan?

Reidrich, Deglan, Tetra, and Illyana all died in the battle of Kaer Morhen.

After Tetra arrives at Kare Morhen; Vesemier first confronts Deglan and Reidrich about their crimes committed and by which they agreed that they had created the hybrids.

Illyana, by that time, goes to the Wither headquarters and decides to hide the young witcher trainees until the battle is over.

In the battle, all the witchers are killed except for Vesemir.

The Kitsu-Mahr hybrid then, by using her magic, makes Vesemir kill Reidrich and, at the same time, wound Illyana by making Vesemir believe that he is fighting her and Tetra.

Deglan, on the other hand, in the dying moments, also manages to put a fatal blow on Tetra, which kills Tetra. Deglan also dies later on due to his injuries.

At the end of the battle, Vesemir leaves Kaer Morhen with injured Illyana, Vesemir wanted to kill the hybrid, but Illyana made him think otherwise and requests him to spare the hybrid’s life.

Vesemir, after carrying injured Illyana, stops in front of a frozen lake and, using his magic, makes the lake warm and spends their last moments together.

Illyana soon passes away in Vesemir’s arms. Vesemir, for the first time, grieves for the passing of someone.

What Happened to Geralt and the Rest of the Trainees after the battle of Kaer Morhen?

Geral of Rivia was seen in the series as a trainee witcher during the starting of the battle.

Illyana helped the young witchers to hide while the battle was going on. She showed them an exit path by which Geralt managed to escape with the rest of the trainees.

Vesemir later managed to find Geralt and the rest of the trainees and made them an offer that he will train all of them to become a Witcher and rebuild the school from scratch.

But as Reidrich and his acolytes are dead now, so there is no one with the knowledge of alchemy, so to build the school and train the trainees to become Witchers, Vesemir now had to find a new mage who will be able to accomplish this, so he starts to look for a new mage for the school.

The series ends with Geralt and the trainees starting fresh with Vesemir as their new mentor and headmaster.

More stories related to the great Kaer Morhen will be followed in the upcoming Witcher Season 2, where we might expect to see Vesemir’s flashback as Geralt’s mentor.

The Witcher: Nightmare of the Wolf Review: Should We Watch It Or Skip It?

We have enjoyed the series very much and recommend that whoever reads this article stream the series as it is available exclusively on Netflix.

Theo James’ performance as Vesemir has been excellent, plus Lara Pulver’s character as Tetra and Mary McDonnell’s character as Lady Zerbst has been beautifully portrayed, which we enjoyed fully while watching.

The series comprises memorable dialogues and some excellent fight scenes, which will satisfy the viewers for sure. Plus, as the series is animated, some of the combat moves Vesemir portrayed excellently would have been difficult to pull off if the series had been live-action.

Plus, the story is fast-paced; although it had some gaps, it comes across the show’s main plot by the end. So we enjoyed The Witcher: Nightmare of the Wolf and will recommend you to stream it as well. That’s all for now; for more such interesting topics, please stay tuned to MediaScrolls.