Stargirl Season 2 Episode 2 will be releasing very soon in the upcoming week. The first episode of the show’s second season takes all the viewers back to the Blue Valley. Over there, Courtney is seen catching up with all her friends. We will see how Courtney falls in trouble in the new episode because of her over-commitment as a superhero. She faces some problems because of this at school, and she is then advised to go and attend summer school.

We will see a mix and match of several latest and old threats over the Blue Valley. Many are plotting some dangerous schemes in the place. Let us have a look at what we can expect from this new episode of the show and a quick recap of the previous episode as well.

When will Stargirl Season 2 Episode 2 Release, and Where Can We Watch It?

Stargirl Season 2 Episode 2 will release on the 17th of August 2021 at 8 PM ET exclusively on The CW. Each episode runs for a time span of 45 minutes, and we will see new episodes every week on the Tuesday of that particular week.

The people who are interested in watching the Stargirl Season 2 Episode 2 can tune into The CW channel if they have subscribed to it. The episode will run there at the given time and date. The official website and app of The CW will also host the show a day after it has been broadcasted on television.

The other places where the audience can watch the show live on their streaming devices include Fubo TV, DirecTV, Hulu + Live TV, and YouTube TV.

If anyone is interested, they can buy the new episode from a few of the VOD services like Apple TV, Amazon Prime Video, and iTunes. HBO Max has the first season of the show for those who are interested in going back and watching it.

Stargirl Season 2 Episode 2 has been given the name Summer School: Chapter Two. In this, we will see Courtney doing her duties as a superhero and examining the entire Blue Valley for two criminals.

Cindy will be seen starting her recruitment process very soon, where we will see Artemis being her first target. Mike is also being considered to be one of the potential candidates for Cindy. It will be very interesting to see how Cindy attempts her ways to make Mike join her.

We might also get to see how Eclipso is using Cindy to fulfill his own demands. Stargirl Season 2 Episode 2 will bring out a lot about the history and the intentions of the Green Lantern’s daughter. There are chances to see Richard Swift, also known as The Shade, who used to be a member of the ISA, in this episode.

Stargirl Season 2 Episode 1 was titled ‘Summer School: Chapter One.’ In this, we saw that the JSA was searching the Blue Valley. However, there has not been much happening since the ISA had been defeated.

Pat advises Courtney to put more focus on her personal life. After Brainwave’s death, we saw how Yolanda kept on blaming himself. He is still living with the guilt of it. We also see that Beth’s mother and father are getting divorced.

She is traumatized, and so she channels her energy to reboot Chuck with the intention of distracting herself from whatever is going on around her.

Courtney has failed two of her classes, due to which he will have to go and attend Summer School. Due to this, her family’s vacation plans all change, and she is not allowed to do her Stargirl duties for an upcoming couple of weeks. We also the man who looks like Sylvester Pemberton arriving in Nevada and finding Pat. 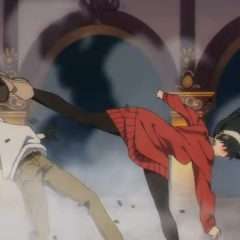