Blood Red Sky Reviews are out, and we are here with our review of the film. Initially, Blood Sky Film was wrongly perceived as a story revolving around a plane hijack when it was announced for the first time. But Blood Red Sky is more than that. It is an action-horror film that involves more of a vampire drama plot.

The story revolves around a woman, Nadja, who has boarded a plane with other passengers. The plane later experiences turbulences of horror that make Nadja initially scared, but later she takes her position to startle them. The film is beautifully combined the horror-action element with the hijacking of the plane by a group of people with a hidden motive for doing so.

Blood Red Sky is now streaming on Netflix, and the story of the film will be binding you with the suspense that stands out till the end of the film. The film is definitely worth watching.

Considering the overall reaction of the audience for this film, it can be said that the film went well through the audience. Blood Red Sky became successful in reviving the horror and frightening emotion in the audience through the film. The storyline of the film appeared more real with the addition of supernatural elements to it.

The best thing about this film is that it doesn’t present everything in front of you since the start; the director has made positive efforts to reveal the binding suspense slowly and steadily as the film proceeds. Like, in the first 30 minutes of the film, you would think Nadja could be the one who has hijacked the plane, but later you are shown to different dimensions to her.

You only get to know the plane is hijacked after a group of Muslims step in and start chanting, “Allah the Almighty” has allowed them to hijack the plane to ‘godless Europe.’

Blood Red Sky takes you through the flashbacks of Nadja’s life and later her role in saving the passengers of the hijacked plane. The flashback at every point in the film acts as an answer to every question that arises in your mind leaving no doubt when you reach the conclusion of the film.

Also, the emotional moment will make you cry when Elias tries to save his mother by making her drink his blood, but Nadja has made a strong stance, and she refuses to stay alive. The beautiful depictions of motherhood taking over the monster hood would make you emotional.

Surely, Blood Red Sky would take you through the roller coaster ride of thrill, emotion, and suspense that definitely make this film worth watching.

Blood Red Sky is the story of a woman, Nadja (Peri Baumeister), with a very peculiar past. Who at first, she was scared of others, but later, she takes a strong stance that would probably save the lives of others.

The story starts to become engaging with series of scenes like aerial warfare force extending their hand to the plane for a safe landing. As soon as the plane lands, a boy falls out, and as soon as he falls out, the officers take him for questioning, and the plane still remains at gunpoint. Now, starts the real essence of the film is when the boy starts revealing something to the officers. This storytelling part by Peter Thorwarth and Stefan Holtz will make you stick to the seats.

The new dimension of Nadja is shown with series of flashbacks that, here we come to know that Nadja is not a normal being and, in fact, she is a vampire when she starts feeding on a dog’s blood. The director of the film has left no benefit of the doubt for the audience, and here we are taken back to the scene is to how she was bitten by a vampire.

Now comes the real thrill and horror of the Blood Red Sky when Nadja starts attacking the hijackers. One of the hijackers injects himself with Nadja’s blood turning the passengers into vampires that create a hell of a mess on the plane.

With the series of actions in between these scenes, the film moves towards its conclusion and the very aspect of the emotional scenes. Nadja sacrifices herself after killing vampire- turned Eightball, and here little Elias tries to save his mother by making her drink his blood. But, she refuses to stay alive as a vampire in order to save the world.

Later, Elias turns out to be the hero of the Blood Red Sky; being a brave boy ever since the start, he successfully blows off all the vampires off from the plane. 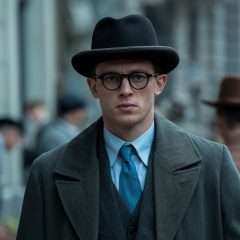