Loki Episode 6: When Will The Finale Episode Release and What Can We Expect from It?

Loki Episode 5 was released yesterday, and by far, it was the best episode in the series so far; we saw the multiple variants of Loki in episode 5 all of them were thrown in the place called the Void. A void is a purgatory-like place where everyone who TVAs have pruned is dumped in the area. There is no way back from this place; once they are here, mostly all of them get eaten by the Alioth. Loki Episode 6 is all set to release next week, which is said to be the finale of the series.

Loki Episode 6 Release Date and Where Can I Watch It Online?

Loki is part of MCU phase 4, and judging by that, Episode 6 of Loki makes it the most crucial episode of the series so far. So to guess what answers Episode 6 needs to give us, we will have to discuss what previously occurred in the fifth episode of Loki.

Loki Episode 5 was full of major plot twists; first, we witnessed Loki, after being pruned by the TVA, go down to the Void, where he meets his other variants as well. On the other hand, Sylvie, in order to save Loki and see where he has been kept, Prune herself and arrives in the Void. There she meets Mobius, who saves her from the Alioth, a monstrous storm that devours everyone who has been sent to the Void.

After Sylvie being saved, he meets Loki and other variants of Loki’s as well. Sylvie believes that whoever created the TVA must have existed in the Void. She and different Loki variants plan to enchant Alioth to go through the entity beyond. When Sylvie tries to enchant Alioth, she was unsuccessful Aloith tries to kill Sylvie instead, but then the Classic Loki comes to the rescue here and tries to distract the monster with his powers showing certain parts of Asgard. Then after trying once again, Loki and Sylvie both manage to enchant Alioth, and that creates a doorway to some castle.

In Episode 6, we will first witness Mobius confronting Ravona and burning TVA to the ground, as in episode 5 before leaving the Void with the Tempad. He promises Loki and Sylvie that he will be going to bring TVA to the ground. But based on the relationship these two had with one other, we think it will be an intensely emotional scene when Mobius and Rvona meet again.

On the other hand, in Episode 5, we finally saw both Sylvie and Loki agreeing that both of them kind of love each other not by fully expressing each other’s feelings but we witnessed Sylvie saying that she doesn’t have anyone else and Loki also asking her that once this all ends both of them will find out together what they should do next. So in the next episode, we might witness their bond going more profound, or maybe Loki might say those three magical words as well at the end of episode 6.

Coming to the most important part of the series the Episode 6 will going to reveal who was behind all this. Who created the TVA, and why all the Loki variants were getting hunted down. Well, in Episode 6, they will get their final answers as they go towards the castle.

As per the comics, the Time Keepers were created by He Who Remains; he was the very last director of Time Variance Authority from the previous reality. He created Time Twisters who destroyed numerous realities, but due to the invasion of Thor and Jane Foster, it was stopped, and the reality spitted into two in one reality where Twisters lived, and in another, they were destroyed. In the reality where they were destroyed, He Who Remains established Time Keepers and TVA to protect time.

We might witness the King Loki variant in the finale episode as well as shown in the episode 6 promo; maybe this Loki managed to survive and might win for a change. He was the one responsible for merging the timelines and establishing TVA; who knows, or It might be as per the comics ‘He Who Remains’ who might have created or all this. We will get our answers next week. Don’t forget to tune into Disney+ on July 14, 2021, at 3 A.M ET or 12 P.M PT to watch the Finale of Loki. 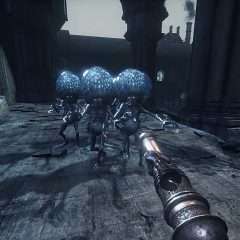