BBC One has released the new submarine thriller Vigil trailer. The show stars Suranne Jones, Rose Leslie, Lolita Chakrabarti, and Adam James in the main lead. It is stated that this six-part series will be going to get launch in the autumn of 2021.

In the trailer, we witness Suranne Jones plays the role of Detective Chief Inspector Amy Silva. Amy leads an investigation team into a conspiracy that endangers Britain’s nuclear deterrent after death on board in a Trident nuclear submarine.

The series has been co-produced by the makers of Line of Duty and Bodyguard. It will mainly showcase the disagreement between the Navy and British Security Services because of a strange disappearance of a Scottish trawler and a death onboard in a submarine HMS Vigil.

Game of Thrones star Rose Leslie also there in the series; we will going to witness her playing the character of Detective Sergeant Kirsten Longacre.

In the trailer, we witness Surrane as Detective Chief Inspector Amy Silva arrives at the scene, and after investigating the murder, Amy says that it a murder. To her answer, someone from the crew now asks who can pull off such a thing. We then saw Rose’s character Detective Sergent Longacew replied that it was a coordinated attack and told it had been done for some cover-up.

Amy then replies this is some sort of staggering act of hostility and declares, “we are not at war; it is an illusion we have always been at War.”

The new trailer will premiere during the England Vs. Ukraine Euro quarter-final, which will happen later tonight. The show will be going to be a six-part series which has been filmed in Scotland. The director of the series is James Strong and Isabelle Sieb. James Strong is a Bafta winner for a crime drama series called Broadchurch. So as fans, we have high hopes for Vigil as well. Apart from the main four casts discussed above, the series also stars Anjili Mohindra, Connor Swindells, Gary Lewis, Stephen Dillane, Daniel Portman, Lorne MacFadyen, and Lauren Lyle. The series has written by Bafta-nominated writer Tom Edge, and episodes written by Ed Macdonald and Chandni Lakhani.

Read More: Loki Episode 5: Release Date and Where To Watch It Online? 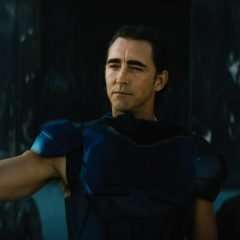