When will Lupin Part 3 Arrive on Netflix?

Lupin Part 2 has been released and has ended with the fans wondering whether there will be a Part 3 of Lupin. Filled with surprises and revelations, Lupin Part 2 has concluded at a point that is hinting that the series is not over. The five episodes long part 2 of the suspense series is written by George Kay and François Uzan. Ludovic Bernard has directed the first two episodes of part 2, while Hugo Gélin has directed the remaining three episodes.

The Lupin part 3 updates also had fans excited about it, to start Lupin, a French thriller series that was first launched on Netflix in January 2021. Since then, Lupin has become very popular worldwide and has become the most viewed non-English series on Netflix. After the astounding success of Lupin Part 1, Lupin Part 2 was also premiered worldwide on June 11 on Netflix.

What happened in Lupin Part 2?

Lupin Part 2 sees the protagonist Assane Diop, played by Omar Sy, on a mission to take revenge on the business tycoon Hubert Pellegrini, played by Hervé Pierre. Pellegrini had Assane’s father falsely imprisoned and also had kidnapped his son. Assane is now determined to save his son and destroy the Pellegrini family to take his revenge.

In Lupin Part 2, Assane takes the help of Detective Youssef Guedira, played by Soufiane Guerrab. Detective Guedira is obsessed with the book Arsène Lupin whose life Assane is following. With the detective’s help, Assane saves his son and goes back to Paris.

Meanwhile, the rivalry between him and the Pellegrini family is at its peak. Assane also tells Pellegrini’s daughter, Juliette Pellegrini, played by Clotilde Hesme, about her corrupt father and manages to convince her to go to the authorities. When this, too, could not put Hubert down, Assane decides to face him directly. He manages to accomplish this during the launch of the Juliette Pellegrini Foundation, where he corners Hubert.

Here, Hubert confesses that he had hired Assane’s father, Babakar Diop, played by Fargass Assandé, only to frame him for the theft of Marie Antoinette’s necklace so that he could claim the insurance money. Pelegrini also confesses that Assane’s father had not taken his own life but had been killed by Leonard, who he sent. This is a shocking revelation to Assane, who goes to the main stage and tells the truth in front of Juliette and the audience. Then, he has to flee the scene as the police arrive.

Assane records the whole confession of Hubert Pellegrini and sends it to Detective Guedira. Lupin Part 2 also saw the corrupt police officer Gabriel Dumont, paid by Vincent Garanger, getting arrested. When Assane shares a clip of Dumont where he admits that he had falsely arrested and forced a confession out of Babakar Diop, Guedira and his colleagues arrest him.

Lupin Part 2 ends with Assane Diop bidding farewell to his son Raoul and former girlfriend Claire after promising them that he would always be watching over his family. He then makes an escape down the river Seine.

Will there be Lupin Part 3?

Fans of Lupin are anxious to know whether a Lupin Part 3 is in anvil or not. The good news is that a statement was issued on the homepage of the Netflix website, which said that Lupin would return for a part 3. This announcement came even before the release of Lupin Part 2. Omar Sy also posted on Twitter that Lupin Part 3 is confirmed. In Lupin Part 3, the audience will hopefully see justice being done with the arrest of Hubert Pellegrini.

So Where it All Began?: Here is a Quick Recap of Lupin Part 1

In Lupin Part 1, the viewers got to see how it all began. Assane Diop had to suffer as a fourteen-year-old teen when his father Babakar Diop was framed by his boss, the French tycoon Hubert Pellegrini. He was falsely accused of stealing the Marie Antoinette necklace and was jailed. Babakar could not take all this and apparently committed suicide in prison.

Assane Diop was shattered by his father’s death and vowed to avenge Pellegrini, who had wronged his father. For this, Assane took inspiration from a fictional character Arsène Lupin by the French author Maurice Leblanc. Arsène Lupin was a gentleman thief with a heart of gold and an expert in disguise.

In the five episodes, Assane Diop carried out different heists, using the techniques used by Lupin. He did this to get closer to his target Hubert Pellegrini. However, Pellegrini comes to know about his plan and gets his man Leonard, played by Adama Niane, to follow Assane. Assane, at that time, was with his son Raoul, played by Etan Simon, and his ex-girlfriend Claire, played by Ludivine Sagnier, at an Étretat festival.

The character of Leonard is also based on “The Mysterious Traveler” from Arsène Lupin, Gentleman Burglar. Leonard kidnapped Raoul from the beach of Étretat, much to the horror of Assane. Then, he met Youssef Guedira, who had been tracking his activities all along with the help of Arsène Lupin. 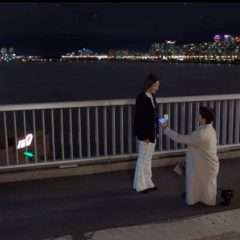