Country Comfort Season 2: When will It Release on Netflix?

The Netflix sitcom Country Comfort just released on Netflix, and now the fans wonder whether it will get a season 2. The show is directed by Caryn Lucas while functioning as the executive producer and showrunner too. It centers around Bailey’s character, who accepts a nanny’s job for five motherless children of Beau, their father, to survive while struggling to make a singing career, but got replaced by a younger one in the band.

Gradually she builds a strong bond with the kids and forgets their sorrow of losing their mother.  The show featured an impressive performance from the cast, great music, and comic elements, and a very positive response from fans and critics. So everyone has been wondering if there will be a second season for Country Comfort.  Let’s see what’s there in the store!

The first season premiered on 19th March 2019 and had 10 episodes, each being about 20/25 mins long.  There hasn’t been any official news about the second season from either Lucas or any other Netflix personnel. But cast members like Eddie Cibrian, who plays Beau, wished that there might be more than one season, and makers of television content of wide range, spend much budget for renewing and developing the sitcom shows.

Anyway, sitcom shows like The Ranch, One Day at a Time, and Fuller House all had a second season, most probably at least one sequel will be for Country Comfort. And this depends on the response, which was positive in this case. If the renewal happens in 2021, it will come out sometime in late 2022.

The cast of the first season of ‘Country Comfort’ consists of Katharine McPhee Foster in the role of the protagonist Bailey, Eddie Cibrian as her handsome new employer Beau, Bailey’s former boyfriend by Eric Balfour, and bandmate Boone. Janet Varney as the character of Beau’s girlfriend Summer, Beau’s oldest son Tuck, by Ricardo Hurtado, second son Brody by Jamie Martin Mann and Griffin McIntyre as Beau’s youngest son Dylan, Shiloh Verrico in the role of Beau’s oldest daughter Cassidy, and Pyper Braun as Beau’s youngest child Chloe. All of the main cast are expected to come back in their roles in the second season.

Read More: Season 3 of Love Alarm to Come Out on Netflix soon?

Country Comfort Season 2: What to Expect?

We find in the first season that Cassidy apprehends that if Bailey wins the Rocky Jackson competition, he might leave them. But their father, Beau, wants her to support the woman who helped them in the recent stories. He takes off his old wedding ring to show his seriousness about his new relationship. But as soon as he has that talk with his children, he puts it back on.

Before their performance, Bailey is left by Boone after he gets the opportunity to be a part of Keith Urban’s Australia Tour. Bailey decided not to perform, being heartbroken, but changes that when she spots, Beau’s sons wait for her on the stage.

So the second season might give revelations about the winner of the competition. Boone might ask Bailey to forgive him after coming back from Australia. Brady and Jo might start dating as they are childhood friends. While, on the other hand, Beau and Summer will get engaged. Stay tuned for more!! 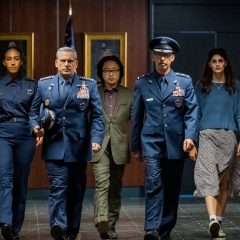 How does Erin evolve in Space Force Season 2?