Zack Synder’s Justice League Review: All You Must Know

Zack Synder’s Justice League has been released, and now the reviews are surfacing online. Viewers were excited about this show, and hence it seems like they have enjoyed it. Many critics have reviewed. On the other hand, people are leaving their reviews on many websites also.

If you have landed here, you might be in the search for a true review. Hence, in this post, we will discuss Zack Snyder’s Justice League reviews and responses. Whether it received positive reviews or failed to stand on people’s expectations, so without any further ado, let us head onto the main point.

According to many critics, this movie may not be considered a great film, but it’s showcased real art. A critic wrote that this movie is touching and has a lot of thrills. Meanwhile, a Twitter post made by Russo Brothers shows that they are supporting Zack Snyder’s Justice League. This is a big achievement for the movie.

Further, there are a few things that remained unchanged. After watching the movie, you would have realized that Steppenwolf is again the same. There is an absence of comparing nature in that villain’s character. Originally, the character of Steppenwolf is a bit human-looking. But, in Zack Snyder’s Justice League, we saw him with a lot of plaster over his face. Apart from that character, Darkseid seems to be a better villain in comparison to the other two. The voice and the design contribute to making it a comparatively better part of the movie.

Read More : Parasyte: The Maxim Season 2 – When will it arrive on Netflix?

Zack Snyder’s Justice League is an action film that is released recently in 2021. Undoubtedly, this time it has more action and thrill. This is what exactly the fans were waiting for. It has a score of 77% on the platform of Rotten Tomatoes at this point in time. What does this mean? This signifies that this movie has received many positive and favorable responses.

According to the critics, it is capable of satisfying its fans. Some of them claim it to be a more enhanced and deeper version than the previous one. Also, one can see major improvements done by the makers, which are appreciable. Overall, it is receiving good and positive reviews from various critics at Rotten Tomatoes. As already known, Justice League is based on a comic. After Batman v Superman, this movie is released on HBO Max.

Flash in the Speed Force was one of the great moments in comic book movie history. #SnyderCut #ZackSnydersJusticeLeague pic.twitter.com/tPt2YJhj42

It is absolutely true that this film is far better and superior to the previous one. Although it possesses a long storyline, the action events and the sci-fi touch didn’t make it boring. After being released on 18th March 2021, Justice League or simply Snyder Cut, it showed that it is worth an appraisal.

At the end of the movie, Harry Lennix appeared as an alien observer. It was quite interesting for the fans. However, the direction part of Zack Snyder was highly appreciated. We saw a lot of improvement in it. But meanwhile, the runtime is quite very long, and hence, it makes the movie a bit lengthy. 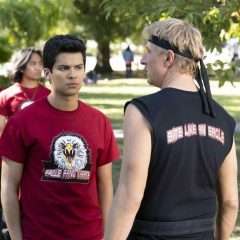 Does Miguel die in Cobra Kai? What Happens to him in Season 4? Will he be back in Cobra Kai Season 5?