Sandra Bullock will Appear in Bullet Train Along with Brad Pitt

Sandra Bullock will Appear in Bullet Train Along with Brad Pitt

Very significant few actors have been chosen for the cast in Bullet Train. The cast of Ocean’s 8 also speaks out as to who they want for the sequel. Sandra Bullock had earlier starred in Ocean’s 8, Speed 2: Cruise Control and Gravity. Presently she is being considered for a role in an action-packed thriller movie, Bullet Train, by Sony.

A few reports state that the actress will be given a role in the film, which has not been revealed yet. The work on the star-studded film started back in the month of October 2020. Their work faced some interruptions when a part of the crew was tested for coronavirus (COVID-19).

Sandra Bullock gets cast in a new film alongside Brad Pitt, Lady Gaga, and Joey King.

The film has some amazing actors and big movie stars like Brad Pitt, Lady Gaga, a once Quicksilver Aaron Taylor-Johnson, Joey King (a star of Kissing Booth), Zazie Beetz ( a star of Deadpool 2), Logan Lerman ( a star from Perks of Being a Wallflower), Bad Bunny, Masi Oka (a star from Heroes), Andrew Koji (a stuntman who turned into an actor), Michael Shannon ( from Man of Steel), Hiroyuki Sanada ( a star from Avengers: Endgame) and Karen Fukuhara (a star from The Boys).

Bullet Train is based on a novel that follows a bullet train in Japan along with a bunch of assassins.

Read More: Henry Cavill Will Not be Making a Cameo as Superman in Shazam 2

Sandra Bullock is also working on a number of projects alongside. It is making a reunion with Netflix to remake a series back from 2009, which had Suranne Jones as the star. She will also work on The Lost City of D along with the Channing Tatum.

A sequel to Bird Box novel named Malorie had come out last year. The first movie was very successful, and so a sequel is very much expected. 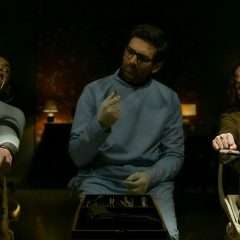 How did Freddy kill Kainaaz and Raymond?