Though the actions in the final episodes of Cobra Kai Season 3 wasn’t the best we saw, it competed with the best moments of Karate Kid films. Hence, it’ll take us all the way to the fourth season of Cobra Kai as the curtain is about to fall on the third one, and fans have started expecting much more from the Emmy Award-nominated Karate Kid spin-off. The third series of martial arts comedy-drama, debuting on the streaming service on New Year’s day, have been welcomed openly by the fans crazy for it.

Inspired by The Karate Kid films, the time period concerning Cobra Kai is 30 years after the events of the 1984 All Valley Karate Tournament. It centers around the deeds and the exploits of the now successful Daniel LaRusso (Ralph Macchio, reprising his central role from the Karate Kid films) who struggles to maintain balance in his life without any supervision of Mr. Miyagi.

The series was first launched on YouTube Red, with the first two series being made available from 2018 to 2019. Both series were acquired by  Netflix acquired in the summer of June 2020 and were streamed for a much wider audience, as it went to become the most-watched series on the platform.

Will There Season 4 of Cobra Kai?

Last October, there have been announcements by Netflix that there’s the possibility of the show getting a Season Four. From the tweets of series co-creator Jon Hurwitz, we came to know that the writer’s room for Season Four had ended.  It’s believed the season 4 will also consist of 10 episodes.

Cobra Kai Season 4 will arrive on Netflix in December 2021

Netflix has officially revealed the Karate Kid Sequel Cobra Kai Season 4 will return with its much-awaited season 4 on December 2021.

On August 27th, 2021 Friday, Netflix has confirmed the fifth season, and along with that, they have also told that season 4 will return in December 2021.

The Filming of Cobra Kai Season 4 was completed in early 2021 and at that time, Cobra Kai boss Josh Heald had said the Cobra Kai team had developed one of the most epic storylines for the upcoming season.

As per Josh’s comments, they are developing a storyline that will keep on providing the dopamine that generates a good feeling and will ensure that everyone watching Cobra Kai gets goosebumps, tears, and belly laughs.

Their recipe for season 4 is the same, but it will come with a different taste, and it will be much bigger and better than its previous seasons.

Who will Be In The Cast of Season 4 of Cobra Kai?

One of the important aspects of Cobra Kai is looking out for actors who will turn up, reprising their roles from the Karate Kid films. It is confirmed about Thomas Ian Griffith – who acted in the role of Terry Silver in Season 4. It is unclear about other guest actors from old movies such as Elisabeth Shue and Ali.

There are rumors going about the appearance of Hilary Swank – who appeared in the fourth film as Julie Pierce and is one of the biggest names who are involved with the franchise.

Though nothing has been confirmed nor denied by Swank about her interest in this matter, she has acknowledged that an appearance would give her character a chance to have a “showdown” with Daniel LaRusso. The co-creators of the show told Cinema Blend that they had “spoken about” getting Swank involved before the premiere of Season 3.

So what we think as the outline of the story from Kreese is: the winner of the All Valley Karate Tournament will remain in the game, and the loser will leave the town. An all-out war against Kreese’s Cobra Kai can be seen in the tournament as the students of Daniel LaRusso’s Miyagi-do and Johnny Lawrence’s Eagle Fang have teamed up in the finals of Season Three.

And lastly, as said by co-creator Jon Hurwitz that they have spoken about literally each and every character that appeared in Miyagi-verse, so it’s obvious that we’ve spoken about Julie Pierce also whether she is returning or not to the series, that’s something we have to wait to find out.

The trailer of Cobra Kai Season 3 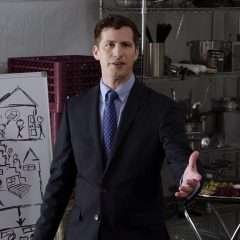