Based on the Karate Kid series, Cobra Kai is an American martial arts comedy-drama streaming television series. It is mainly created by Jon Hurwitz, Hayden Schlossberg, and Josh Heald, and the series is set after 34 years of Karate Kid film.

The series reexamines the narrative from the protagonist, John Lawrence’s viewpoint, and his decision to reopen the Cobra Kai karate dojo to defeat his old rival Daniel LaRusso. The series was first launched on Youtube Premium in 2018. Netflix has acquired the cobra Kai series in 2020, and the third schedule is supposed to be released on January 8th, 2021. There has been further news that suggests a fourth season ahead of the third season premiere.

The series’s plot is about Johnny Lawrence, who works as a part-time handyman, is in his fifties, and stays in an apartment in Reseda, Los Angeles. He has an ex-girlfriend Shannon Keene and a son named Robby Keene. But he had abandoned both of them since he was really not over his then high school girlfriend, Ali Millis. Once after getting debarred from his job, Lawrence had used Karate to save his neighbor Miguel Diaz from getting bullied by a mob.

Miguel was extremely interested in learning karate, which made John reopen Cobra Kai karate dojo. This activity somewhat rekindled his past rivalry with Daniel LaRusso. Daniel is the owner of a successful car dealership chain and has two children named Samantha and Anthony.

Robby convinces Amanda to hire him for a position at the LaRusso Auto dealership and develops a close friendship with Daniel. Robby even studies Mr. Miyagi’s form of Karate with Daniel and becomes friends with Samantha. She then breaks up with Miguel and joins her father’s form of Dojo. Miguel eventually starts dating Tori, another Kobra student, who is also Sam’s rival.

In the announcement teaser, the story is likely to determine whether eternal rivals Johnny and Daniel can finally keep aside their differences and work together for a common goal. The teaser confirms that Daniel will head to Okinawa, Mr. Miyagi’s hometown. More will be revealed about Miyagi’s and Cobra Kai’s martial arts philosophy’s origins, directly tied to Daniel Okhinawa’s excursion.

The series has been nominated in several functions and has won the Rotten Tomatoes’ Best Golden Tomato award in 2018. The story of Cobra Kai mainly deals with primary relationships, which leads to conflicts showing how the hero and the anti-hero has a tough time moving away from the past. Thus, the gripping end of this series is much awaited by its audience. 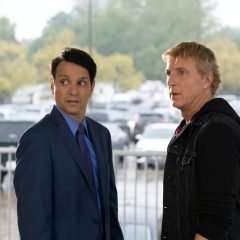 Netflix has Renewed Cobra Kai Season 5 already Ahead of Its Season 4 Premiere.
close